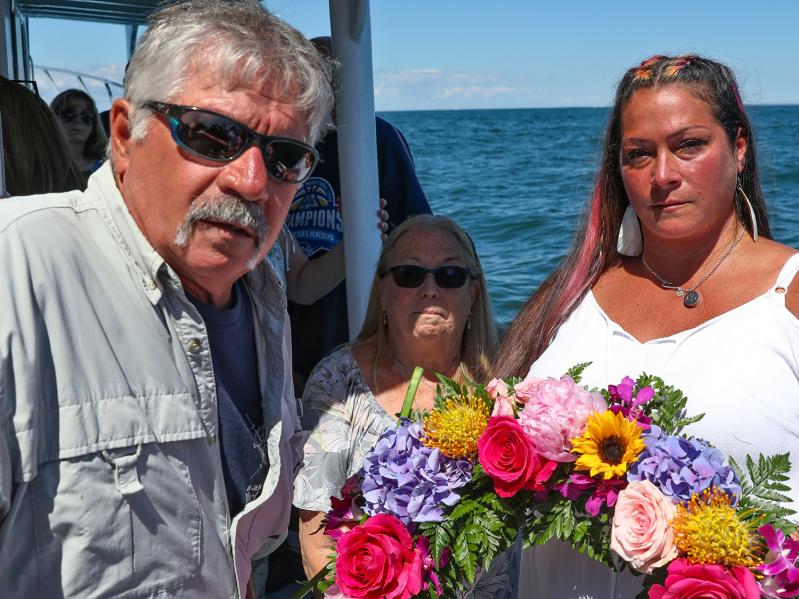 Aboard the Lazybones on June 28, the Vegessi family dropped a wreath in the waters off the Montauk Lighthouse in remembrance of Serena Vegessi Schick, who died last fall.
Heather King
By Jon M. Diat

With a bright blue sky mixed with mild temperatures that came with a slight northwest wind, June 28 was by far the best day we’ve had this summer.

But beyond the beautiful conditions, for me and about 40 other people who boarded the Lazybones, a popular Montauk party boat that has been under the stewardship of Capt. Michael Vegessi — with shoreside support from his wife, Kathy — for decades, it was a somber and emotional day.

Sadly, we were not there to go fishing. We were on the light-blue 55-foot craft to remember and pay homage to their daughter Serena, who died suddenly last fall at the young age of 42 due to complications from Covid.

While her life was short, Serena touched many in the community that still clings to its rich fishing heritage. In Montauk, those who work on the water are part of a tight-knit group that sticks together in good times or bad. Certainly, there is a spirited undercurrent of competition between boats when it comes to who is high-hook or who catches the largest fish, whether it’s on a leisurely half-day fluke trip or an offshore tilefish boat that’s on a seven-day trip in the middle of winter. But the respect is there, no matter how big or small your boat. It’s a real and honest bond.

That afternoon in Montauk, heading off to the east to the Montauk Lighthouse, it would be time for those who knew Serena best to pay their respects. She spent many years in her youth and early adulthood, as well as the final few months of her life, working the deck of the Bones netting or filleting fish, untying tangles, or just patiently helping youngsters catch the first fish of their lives. Her ever-present smile and twinkle in her eyes, even on a poor day of fishing, always made the trip feel successful at the end of the day.

Last Tuesday would also have been Serena’s 43rd birthday, yet there we were drifting a short distance from the Lighthouse to disperse her ashes into the sea. It was hard not to cry.

Upon the stern deck, the Vegessi clan, including her sister, Rebecca Vegessi Gagnon, and close friends recited poems, told stories, and shared various words of love in her memory. In the midst of the tribute, Capt. Tom Cusimano of the charter boat Sea Wife IV, while returning from a trip offshore, sounded his horn several times in respect as he passed by us. Cusimano, like many who have worked aboard boats in Montauk, knew Serena well since she was born at Southampton Hospital.

While many tears were shed on that picture-perfect afternoon, it was gratifying to know that she touched so many people in a very positive way in her short life. Fair winds and following seas to you, Serena. May your memory be eternal.

Out at Montauk, fishing for striped bass and bluefish remains strong, while porgies are large and plentiful in their usual summertime haunts. Sea bass remain abundant, but it can be a challenge at times to secure a three-fish limit, as many fish fall below the 16-inch minimum threshold.

As for fluke, the fishing has been improving. “We’ve been picking away at them and it’s getting better,” said Capt. Mark Ryckman of the Montauk Star, a full-day party boat. On Sunday’s trip, Ryckman put his fares on more than 80 keeper-size fish, including two that were over 10 pounds.

“Fishing for bass and blues has been really good, with lots of sizable and personal-best bass being caught and released,” confirmed Capt. Paul Dixon, a seasoned light-tackle guide of To the Point Charters in East Hampton. “It has been great action on the fly and spinning gear, if you can get away from other boats. Sometimes it’s a real zoo out there.”

Sebastian Gorgone at Mrs. Sam’s Bait and Tackle in East Hampton also reported an uptick on the action for fluke, with the Ruins at the northern tip of Gardiner’s Island being particularly productive. “The fishing has been good from the recent reports,” he confirmed. Gorgone also said that blowfish are large and running well inside Three Mile Harbor and that blue-claw crabs are on the prowl.

“Plum Gut remains hot for bass and blues, but those who fish from the ocean beaches have also caught some very nice striped bass from the surf,” he added.

Farther west, Ken Morse of Tight Lines Tackle in Sag Harbor said that fluke fishing has been picky in most locations. “It really has not been a great season so far,” he said. “The weakfish have also slacked off in Noyac Bay, but the Gut still has some excellent action on bluefish and bass.”

Mashashimuet Park's History and Future
A Conference for Young People to Create Solutions
Get Outside, Get Moving
END_OF_DOCUMENT_TOKEN_TO_BE_REPLACED