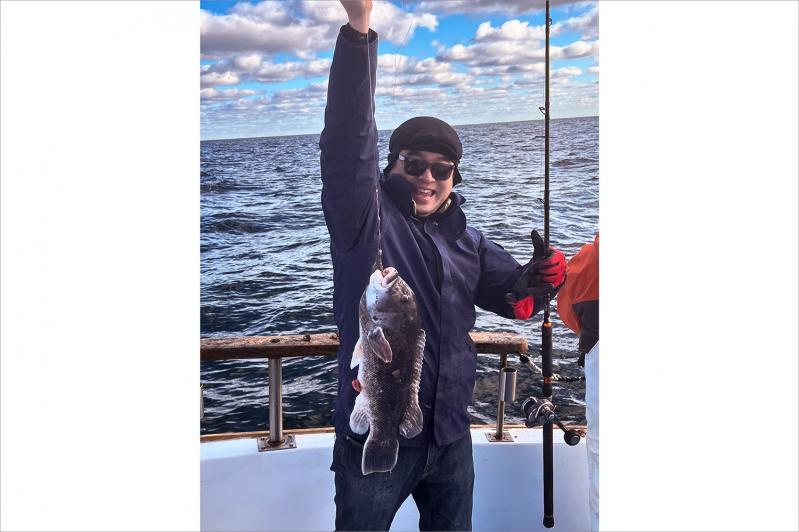 Rue Yamauchi caught this nice blackfish on Monday on the Simple Life out of Montauk.
Jon M. Diat
By Jon M. Diat

To borrow a phrase from the game of baseball, the fishing season is now in the bottom of the ninth inning. It’s the last licks for those in pursuit of fish with a rod and reel.

Striped bass season concludes next Thursday, Dec. 15, while blackfish season comes to an end seven days later on Dec. 22. To top it off, Dec. 31 is the final day to retain black sea bass.

After the beginning of the new year, codfish will be the only game in town for many months, but even then, new regulations enacted last summer limit anglers to keep only five fish between 22-28 inches in length in their cooler. Formerly, the less restrictive limit was 10 cod over 22 inches could be kept.

Rumors of a potential moratorium on cod are also circulating around the docks. It’s certainly looking pretty bleak for codfish aficionados, including yours truly.

As such, given the calendar, I’m trying to cram in as many fishing trips as the weather and my schedule allow before I settle in to my wintertime pursuit of clams and steamers from shore. There is nothing better than plump and sassy clams harvested and enjoyed during the winter months.

On Monday morning, I hopped aboard the Simple Life, a Montauk charter boat under the guidance of Capt. Tyler Quaresimo, one of the finest young captains in the port. The usual suspects of the latter days of the season — blackfish, cod, and sea bass — were on the menu. The weather forecast was favorable. That in itself was a blessing.

“The fishing was a challenge,” my friend Anthony Caputo, who fished with Quaresimo early Sunday, reported that evening. With a rather gusty north wind that lasted most of the morning, the crew caught a smattering of blackfish and sea bass.

Caputo, who lives in East Setauket, teaches high school students up west in the Oyster Bay School District. He loves to fish when not in the classroom. He said that Quaresimo had fished the Cartwright grounds, located about eight miles south of the Montauk Lighthouse.

I appreciated his advanced report. It gave me a better idea of what to expect and pack for the next day.

Arriving at around 5:30 a.m. of the Montauk Marine Basin on Monday, I was warmly welcomed by Quaresimo as I entered the main cabin of the 42-foot Bruno that was tied up not far from the fuel dock.

“Hey, great to see you again,” he said in the chilly darkness. “Glad you could make it.”

As I shook hands with him, I was reminded that he lost part of a finger about a month ago while minding the anchor when he was filling in on his father’s party boat, the Miss Montauk II. Such is the harsh life of a fisherman. It is a most dangerous career.

“I’m doing okay,” he said about the accident. “It’s healing up rather well, but it’s sometimes hard to sleep.” With the diesel engine warmed up, Quaresimo steered us to the east as we exited the jetties that guard Montauk Harbor.

“It’s going to be a 21-mile ride to the southeast of Block Island,” he said. “Hopefully the fishing will be better than yesterday.”

While the air temperature hovered around 32 degrees, Block Island Sound was practically flat calm on the ride out. As the sun broke over the horizon, we were greeted by an incoming Navy nuclear submarine on our starboard side, making its way back to port in Groton, Conn., about 15 miles to the north. Always a cool sight to see.

Anchored up not far from the Block Island wind farm, the action was consistent right from the start. In the first 10 minutes, I landed a hat trick of a keeper-size cod, blackfish, and a sea bass.

The rest of the day continued to provide a nice mixture of blackfish up to 10 pounds and sea bass nearing the four-pound mark. Sprinkled in were a few more codfish.

Finally, this column marks the last one for the year until early spring. By then, my lobster traps will be back on the soak. It will be the start again of a new beginning. Tight lines and best wishes to all this holiday season.