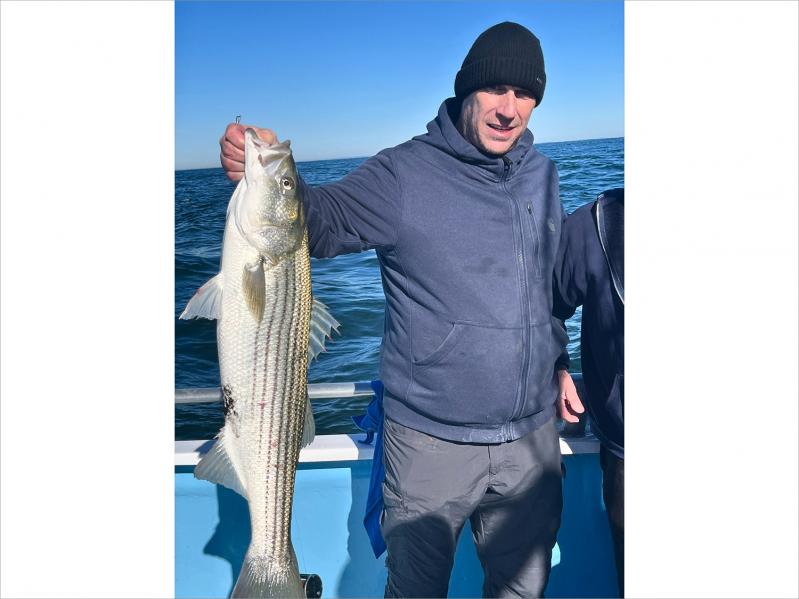 Pavel Roztocil from Prague in the Czech Republic caught this keeper-size striped bass aboard the Lazybones out of Montauk on Sunday morning.
Jon M. Diat
By Jon M. Diat

It has been three years since I last slung a diamond jig into the turbulent rips east of the Montauk Lighthouse for the fall run of striped bass. Frankly, the bass fishing the past few years has been poor and has ended prematurely by mid-October, with the fish bypassing Montauk on their migration south.

Nobody knows why the pattern changed, but at least so far this fall, the bass have hung around later and in greater quantities. How long they will stay is another point of speculation.

On Sunday morning, I decided it was time to hop aboard the Lazybones out of Montauk. The popular half-day party boat has been under the guidance of Capt. Michael Vegessi and his wife, Kathy, the longtime, shoreside support arm, going back to 1984.

I’ve lost count of how many trips I’ve fished upon her deck for flounder, fluke, sea bass, bluefish, and striped bass. The Vegessi family have been true friends for decades. Plus, Michael is a mighty fine captain.

“Slack tide is around 9 a.m., so we will need to be a bit patient until the incoming tide starts to pick up,” Vegessi said in the wheelhouse, as we made our way east on Block Island Sound toward the Montauk Lighthouse. “We had a decent trip yesterday morning with a few keepers. The afternoon trip we loaded up on large bluefish.”

Sure enough, by the time we reached the Lighthouse, the tide was negligible and the bass were not in a feeding mood. Nearby, a few charter boats were on the troll with umbrella rigs, but they too were having no luck. We needed to wait it out.

Vegessi then steered his 55-foot Bruno craft to the northeast to the Pollack Rip, about a mile away. The naming of the rip pays homage to days long gone by (we’re talking more than a half-century here) when pollack, the cousins of codfish, were regularly caught in great abundance. It’s been probably four decades since a pollack was last snatched out of those waters. Sad.

Looking over his shoulder, I could see small blobs of fish on the color fish finder. A good sign. The tide was picking up, and the 15 other fares that morning were anxious to latch into a bass.

Casting my six-ounce jig underhand ahead of the building rip, I quickly received a pickup from a fish, but the drag on my reel was set too lightly and I lost the fish. My bad. I neglected to check the drag before I started to fish. It was a rookie mistake I should not have made.

Vegessi made another drift and this time I connected with a feisty 27-inch striper. Unfortunately, it could not be retained as striped bass need to be between 28 and 35 inches in length. Meanwhile, other fares were also battling fish. The bite was on.

“Get a net in the bow!” Vegessi, standing topside, yelled to Joe McDonald, one of the two mates working the deck that morning. McDonald has worked on the Bones for 10 years and is a very savvy fisherman in his own right. He keeps his 22-foot Sisu boat at the Montauk Marine Basin and tries to fish as often as he can.

Looking forward from my corner spot on the port side of the stern deck, I could see that the now netted fish was large enough to be retained.

Over the next two hours, the bite was consistent. Each drift, which probably averaged only five minutes in length, afforded me a striped bass. Alas, of the 15 fish I caught, only one was large enough to be kept. But that’s just fine, as anglers can retain only one fish per day.

By the end of the trip, some zeppelin-size bluefish made their presence felt. The bruisers nearly reached the 20-pound mark. I caught one on the last drift of the morning before we headed back to port. I was worn out.

All aboard had a fine morning of action. About a dozen stripers and an equal number of blues were retained on the picture-perfect day.

Vegessi, who sails daily at 8 a.m. and 1 p.m., plans to continue fishing for at least the next two weeks or even longer.

“It all depends on the fish,” he said on the ride back. “If the fish are here and people want to come out, we will go.”

It was great to be back on the Bones again.

Before driving back home, I paid a visit to Chris Miller at Westlake Marina, a short jaunt from where the Bones is docked. Miller confirmed that the fishing has been good on several fronts.

“The bass fishing is holding up,” he said with a smile from behind his desk. “Sea bass too have been cooperating, but many are focused on blackfish, which has been very good since the season opened two weeks ago.”

Miller said that the best action for blackfish has been off to the east at Southwest Ledge and on rocky bottom south and east of Block Island. “The fishing will only get better as the waters continue to cool off too.”

Miller also relayed that he weighed in a 785-pound giant bluefin tuna on Oct. 24, the final day before the fishery was closed by federal regulators, as the quota of the highly-regulated fish was maxed out. “It was a really huge, beautiful fish,” added Miller.