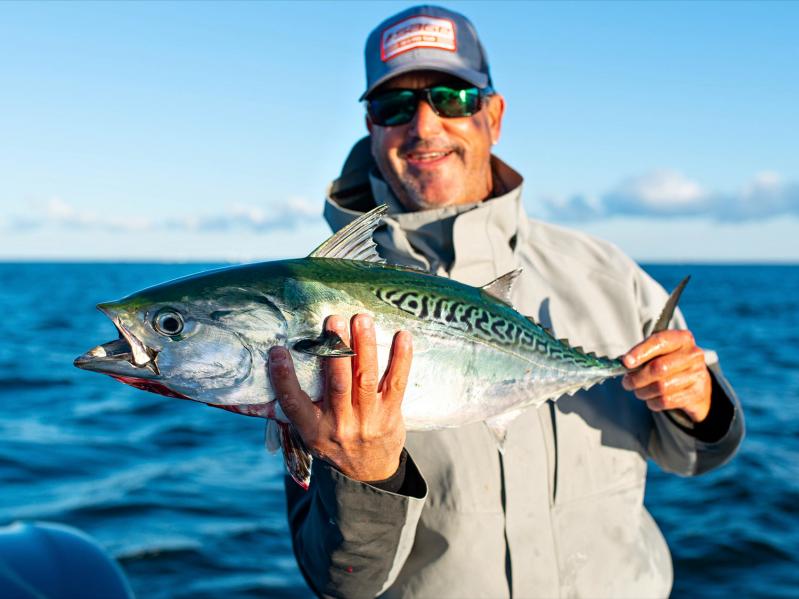 After contracting Covid-19 in Quebec City two weeks ago while on a much-needed vacation, I was frustrated that I continued to test positive for the virus for nearly 10 days after my return to North Haven.

No doubt that daily nasal swab tests for the virus are certainly an annoyance. Yet, as I’ve learned, Covid-19 is certainly a tough bird. My symptoms felt like a mild case of the flu or common cold. There were some body aches accompanied by a slight fever, combined with a lethargy that tired me after a few minutes of exertion. It was frustrating, but I knew my condition would ultimately improve given all the booster shots I had received. I needed to be patient.

That said, I was still chomping at the bit to get on my boat and do a bit of fishing. I had not dropped a baited hook in nearly a month.

While the fishing for striped bass has been strong in Montauk, it was out of my reach, so I decided to take advantage of the sunny and windless conditions on Saturday morning for the opening of blackfish season in waters outside Long Island Sound (blackfish season in the Sound opened four days earlier). Saturday was a perfect day to try.

Unfortunately, after two days of testing negative for Covid-19, I had re-tested positive on Friday morning. It was a sad setback. The two other guests I had invited smartly bowed out from fishing. My wife was still positive with the virus, so it was just the two of us — Team Covid — as we headed east to the blackfish grounds near Plum Island.

I settled upon a rocky piece of bottom in 18 feet of water, not far from where I dunk my lobster trap. With the anchor held tight on the incoming tide and a large bucket of green crabs on the stern deck, it was finally time to bait our hooks.

“Let’s see if they are home,” I said to Terie. “The conditions are prefect and we are right on the spot I want.”

We did not have to wait long for an answer. In a matter of seconds our crab baits were ferociously attacked by hungry blackfish, which were there big time.

Four hours later, we had totaled approximately 60 blackfish, but kept only a few for the dinner table (anglers can retain four fish over 16 inches per day). The largest of them was around five pounds. A few sea bass were also mixed in.

As the waters continue to cool, the fishing will continue to improve with larger specimens showing up in greater frequency. Hopefully, I will have more company on board to enjoy it with. By Sunday morning, I thankfully tested negative.

Other positive reports on blackfish were also noted.

“It was an awesome opening day for 2022 blackfish,” confirmed Capt. Mark Ryckman of the Montauk Star, a Montauk open boat. “We had a real nice boat limit of healthy, fat fish with four of them weighing over six pounds and two that were over eight. There were fish on every drop we did. It was great early-season fishing.” Ryckman sets sail every morning at 6 a.m. from the Star Island Marina.

On Sunday, Capt. Hugh Chancey of Chancey Charters out of Montauk took a two-person tandem out for an excellent time with the togs. “They caught 27 keepers, only keeping their limit and releasing the rest,” he said. “It was nonstop action all day, with tons of shorts and a few sea bass too. We even finished up two hours early.”

Capt. Tom Mikoleski of the charter boat Grand Slam also steamed out to the blackfish grounds on Sunday. “There was a lot of action and you had to pick through a ton of shorts, but we put together a very respectable catch,” he said.

The skipper added that striped bass fishing at night has been very good, and that the daytime action for bass has been better on the troll. “Diamond jigging has been lacking the last couple of days,” he added.

For those focused on light tackle action, Montauk continues to please many.

“Fishing has been good,” remarked Capt. Timothy O’Rourke of Montauk Point Fly Fishing charters. “There are plenty of larger-sized striped bass on flies and light tackle. False albacore are around, but you need to work at it to consistently catch. But the ones that are here are very large.”

The veteran guide noted that most bass are in the 30-to-38-inch range with bigger ones mixed in. “There are plenty of slot-sized fish to enjoy with the larger ones.” Anglers are allowed to keep one striper per day between 28 and 35 inches.