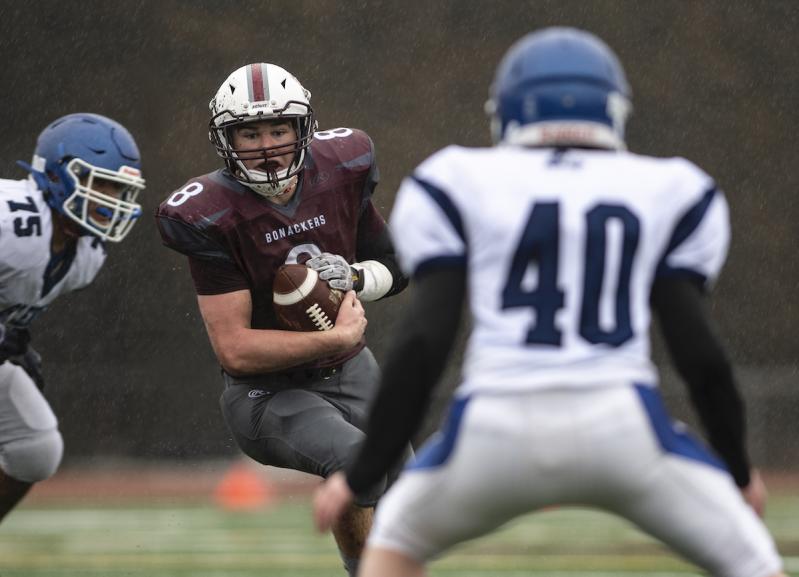 Kevin Bunce (8) scored East Hampton's first touchdown of the season by way of a 15-yard run in the second quarter of last Thursday's game here with Elwood-John Glenn, which prevailed 18-8.
Craig Macnaughton
By Jack Graves

East Hampton High's football coach, Joe McKee, rated Elwood-John Glenn as a team similar in skill to Babylon, which had blanked his Bonackers 37-0 in their league-opener.

That Glenn prevailed 18-8 in last Thursday's game here, a game played in the rain, augured well, the coach was to say afterward. The defense continued to play well, he said, and the offense, which barely made it across midfield in the game with Babylon, showed that it had improved greatly, thanks largely to "simplified blocking assignments."

Benefiting from early errors -- a fumble of the opening kickoff and, not long after, a safety caused by a bad fourth-down snap -- the visitors jumped out to a 9-0 lead in the first quarter and tacked on a field goal in the second.

But then it was East Hampton's turn. Santi Maya picked off a third-down pass at East Hampton's 38-yard line, and while the Bonackers were subsequently forced to punt, a fumble recovery at Glenn's 15 put the ball back in their hands.

This time, East Hampton did not disappoint. After Topher Cullen threw incomplete on first down, Kevin Bunce, the running back, went off left tackle for East Hampton's first touchdown of the season, and Cullen followed up with a carry into the end zone. And so the teams went into the halftime break with Glenn clinging to a 12-8 lead.

Another bad fourth-down snap resulted in the visitors scoring by way of a quarterback keeper early in the third quarter, putting them up 18-8. (Rene Criollo, East Hampton's starting tight end and long-snapper, had been quarantined, McKee said, because of a fellow BOCES student's positive coronavirus test.)

The point-after kick was blocked by Richard Barranco, East Hampton's leading tackler, who on the ensuing drive had to be carried off the field by Lorenzo Rodriguez, one of McKee's assistants, after he'd suffered an ankle bone break -- a loss that will hurt, McKee said.

That 11-play drive, East Hampton's most productive of the day, spanned 57 yards, to a fourth-and-five at Glenn's 19 as the fourth quarter began. A pass in the flat went for naught, however, ceding the ball to the visitors at their 18.

A subsequent illegal-procedure penalty put it back at the 13, at which point the Bonackers forced a fumble and recovered at the 15, a turnover they, unfortunately, could not turn to their advantage. Four downs later, Glenn took over at its 10.

A sack of the quarterback soon after, on third-and-seven at Glenn's 39-yard line, forced a punt, which went out of bounds at East Hampton's 29.

With time running out, Cullen took to the air. Maya dropped his first attempt, which sailed high, the next also went incomplete, and the third was intercepted at the 31.

East Hampton's defenders dropped ball-carriers for three and five-yard losses on the first two downs. The quarterback gained five on the third, and on fourth down he bulled his way through would-be tacklers for a first down at the 17 that effectively closed out the hard-fought game.

"We had our chances," said McKee, whose charges saluted their opponents with helmets raised at the end.

East Hampton was to have played at Wyandanch Monday, "but there will be no game," said the coach. "One of their players had a positive test."