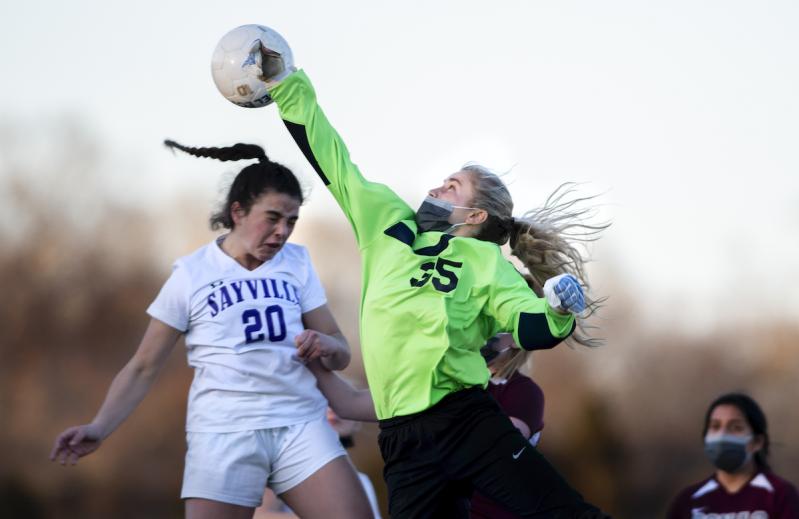 A 4-0 score in field hockey is pretty much of a rout, and East Hampton High's team, paired here with Babylon Monday, wound up on the high end of it, wonderful to tell.

Nicole Ficeto, Bonac's coach, could not find much fault with the way her charges played in the second half, during which her team tacked on three goals to the one Melina Sarlo had scored in the first quarter.

With Anna Hugo, a senior midfielder, back, often leading the way, with forays up the right side and with crisp free hits, East Hampton's attackers were constantly presented with scoring chances in the third and fourth quarters.

Hugo herself got on the scoreboard midway through the third, Rorey Murphy, a senior back, notched a corner-play goal early in the fourth, and Molly Cangiolosi's deflection of a shot by Hugo rounded out the rout with five and a half minutes left to play.

Ficeto's team had lost 3-2 at Sayville last Thursday, a game that wound up tied 2-2 at the end of regulation. Katie Bruno (who Ficeto said Monday had been lost for the season because of a broken thumb) scored the first of East Hampton's goals, assisted by Kuplins, and Medler scored the other, assisted by Cangiolosi.

In a seven-on-seven overtime period, the home team managed to eke out the win. Ficeto said afterward that Schaefer "had a great game, making nine saves, some key ones in one-on-one situations," and that Hugo too "had a phenomenal game, at midfield or left back, as needd."

The team needs to finish with at least a .500 record to make the playoffs, and it seems, based on Monday's performance, that that is likely.

Alex Choi, who coaches girls volleyball, a squad that has on it only three seniors, said this week that his team was looking good as well, despite the rebuilding year.

Choi's charges defeated Shoreham-Wading River in five sets here on March 10. "It was a bit of a slow start, but once they got going it looked good," said the coach. "They moved and talked on the court very well, and it was very entertaining to watch."

Mount Sinai shut out the Bonackers on Saturday, but, because of SAT testing, Choi had fewer players that day. Considering that he had to play some of his charges at positions they weren't used to, the team played well, the coach said.

As for girls soccer, "The season isn't going to be easy for our Bonackers -- we're facing some of the top Class A teams in the county," Cara Nelson, the coach, said in an email, "but they're ready to battle each game."

On Friday, her team lost 2-1 to Sayville, as the result of a late 30-yard shot that hit off the underside of the crossbar, a disappointing turn of events, especially for East Hampton's defenders, who had "battled hard against a skilled Sayville squad with a high-powered offense."

The boys cross-country team won its league opener with Islip last week, taking four of the top five places in the 2.5-mile race for a score of 20-37. It was the first meet in which a Kevin Barry-coached cross-country team has participated since Oct. 15, 2019.

Evan Masi, a junior, who was all-state two years ago, and Brayan Rivera, a freshman, crossed the Belmont Lake State Park finish line together, in 13 minutes and 38 seconds. Aidan Klarman, a junior, was fourth, in 13:54, and Mikey Gilbert, a freshman, was fifth, in 14:04. Another freshman, Liam Fowkes, was eighth, in 15:16, followed by Manny Vilar, a senior, in 15:18.

The boys were to have run against Miller Place Tuesday at Cathedral Pines in Middle Island. The girls meet scheduled to be held here that day has been postponed "because some of the Miller Place girls have been quarantined," Barry said in an email Tuesday morning.