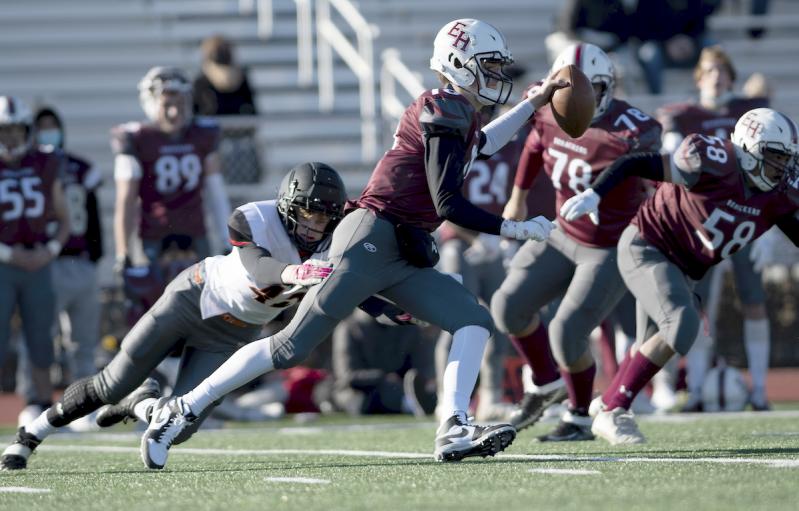 Topher Cullen, Bonac's quarterback, with the ball above, barely had time to breathe in Saturday's season-opening game with Babylon.
Craig Macnaughton
By Jack Graves

Joe McKee, who has been working hard to rebuild East Hampton High School's football program in recent years, was happy to take the field here Saturday afternoon with the first varsity team he's coached since the fall of 2016.

The untried Bonackers, who had only two weeks to get ready, were facing in Babylon one of the county's stronger teams. "They've made the playoffs for the last 10 or 15 years in a row, and have won championships," McKee was to say following the 37-0 loss.

"I thought our defense did a really nice job," he said, "despite the fact they were on the field a lot. Two of their touchdowns came on fourth-down plays, and, unfortunately, they were able to score just before the half" on a 22-yard pass into the end zone.

Richard Barranco, a Pierson senior who played against some of his present teammates in the East Hampton-Southampton jayvee game in 2019, led the team with 12 tackles. Melvin Molina had seven tackles, two of them for losses. Hudson Brindle, another Pierson senior, who last played for Southampton two and a half years ago, "was in on a lot of tackles," said McKee, adding that Nick Lombardo, a first-year defensive end, had also played well on defense, as had Kevin Bunce, East Hampton's running back, who as a linebacker was in on eight tackles.

(Bunce, Brindle, and Lombardo were teammates on an impressive youth rugby team, the Section XI Warriors, that Bunce's father, Kevin Sr., coached in the spring of 2019.)

With the Panthers blitzing frequently, East Hampton wasn't able to make much headway offensively. Bonac's quarterback, Topher Cullen, who led the 2019 junior varsity to a 5-1 record, barely had time to breathe. He was intercepted twice -- in the final minutes of the first quarter, a 32-yard pick-6, and again in the fourth, at the home team's 23-yard line, a fourth-quarter turnover that led seven plays later to Babylon's fifth touchdown of the day with seven and a half minutes left to play.

Babylon's playbook was varied, so much so that East Hampton's defenders, who indeed enjoyed periodic success, at times were caught flat-footed.

The visitors scored their first touchdown midway through the first quarter after Bunce, who lined up to punt, was smothered at East Hampton's 21 when he began to run with the ball. Five plays later, the Panthers, quarterbacked by Joe Young, were in Bonac's end zone as the result of a 1-yard plunge by Colin Winter, who, moments later, was to run the ball in for 2 extra points.

That pick-6, by Joseph Kelly, followed a little over two minutes later. Kelly's point-after kick was good, for a 15-0 lead.

Young was hit on third down by Bunce, and by Lombardo on fourth down early in the second quarter, but East Hampton then went three-and-out, as it was to for pretty much the entire afternoon. Soon after, it was Molina and Barranco's turn to stymie third and fourth-down Babylon plays, after which again the Bonackers were forced to punt.

East Hampton almost made it through the frame without a Babylon score, but, with 17 seconds left until the break, Elijah Kneeland hauled in Young's 32-yard pass into the end zone, after which another completed pass made it 23-0.

Another touchdown pass to Kneeland, on fourth-and-five from East Hampton's 9, upped the visitors' lead to 29-0 with about three minutes gone in the third quarter. Kelly's subsequent point-after kick was good, for 30-0.

Following the kickoff runback, a completed pass to Brindle, and a face mask call, on second-and-five from Bonac's 33 Cullen finally had enough time to take to the air, and a beautiful pass it was, a tight 40-yard spiral that landed just beyond the reach of the intended receiver, who had dashed down the left sideline.

Bunce dropped back to punt on fourth-and-four, taking off, as he had earlier, when the ball was hiked. This time he rushed for a first down at midfield, but three plays later Barranco was stopped one yard shy of another first down at the Babylon 44.

"Babylon was fundamentally a very good team," McKee acknowledged, and today's opponent, Elwood-John Glenn, he added, would be another. Still, it was good to be playing at the varsity level again, the coach said, and as far as the pandemic was concerned, "we're getting there."

One of East Hampton's fans said in an email Monday that he and a number of other fans were turned away from the game, as they did not have passes.

The emailer said further that he thought the school was being "way too cautious" given the bleachers' ample seating capacity and the fact that the game was being contested outdoors. There were about 75 in the stands that afternoon.

"If they are trying to revive interest in football, this is not a very smart move, I would think," the banned fan concluded.

"We're only allowed two spectators per athlete, and that's for all sports," Joe Vas, the East Hampton School District's athletic director, said, referring to Section XI, the governing body of Suffolk County sports. When packed, the bleachers could probably hold around 1,500 spectators, he said. "I have to follow the rules -- each athlete got two passes. Things may change, but for right now it's two spectators per athlete."