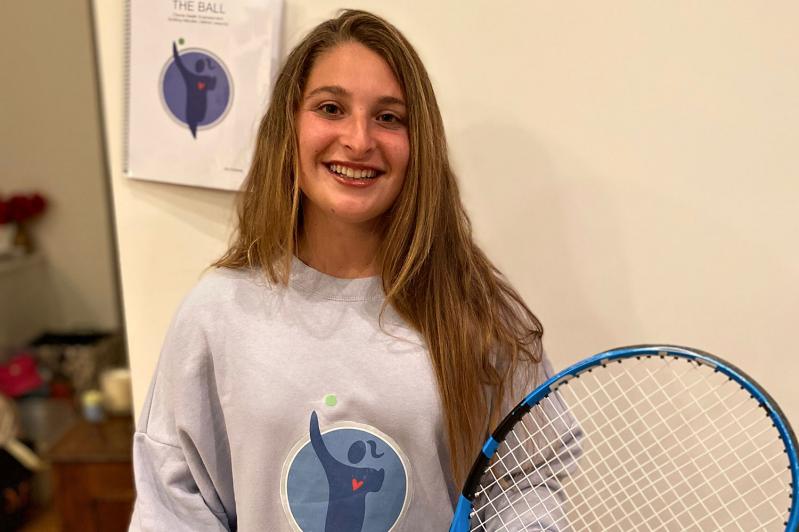 Ally Friedman, a Ross School senior, won a Billie Jean King Youth Leadership Award on ESPN Sunday night for her work in the empowerment of young girls.
By Jack Graves

Ally Friedman, who for the past three years at the Ross School in East Hampton has been using tennis as a vehicle through which to boost her 7 through 12-year-old female students' self-esteem, health, and resilience, is one of seven young people from across the country to have won a Billie Jean King Youth Leadership Award, which includes a $10,000 scholarship.

It was the second major award that Friedman, a Ross School Tennis Academy senior who's to attend Bates College in Maine in the fall, has won in the past few months. She was cited as the United States Tennis Association's junior volunteer of the year at the New York Open in February.

King was among Friedman's heroes while growing up, and while she won't meet her until July 2 in New York City, she was able to talk one on one with the tennis legend at some length before a Facetime session with all the winners began this past week, having joined it early.

"It was super, super cool," she said during a telephone conversation Monday. "For a while, it was just Billie Jean King and me and the ESPN woman. She began by saying, 'Ally, how's everything in East Hampton?' "

"The awards," Friedman said, "were for people who have used sports to change the lives of adolescents. . . . She said she was so proud of what we'd done, and that she wanted to be in our lives forever. It was incredible."

Friedman was inspired to create her own 12-week empowerment curriculum for girls by Theresa Roden, her former mentor in the internationally recognized I-Tri program for middle school girls, along with Mark Crandall's Zimbabwe and South Africa-based Hoops 4 Hope. It was Roden who suggested she apply for the scholarship, thinking she'd be "a perfect fit."

"At first, I didn't think it would be possible — I thought it was insane." Ten 750-word essays were required. In them, she had told Billie Jean King all about her program, her community, what she believed. . . . And the more she wrote, the more "super motivated" she became. "I really wanted to win."

Originally, she was to have gone to Los Angeles to receive the award, but the coronavirus pandemic caused a change in plans, just as it had in mid-March when she and her fellow Ross students learned as they were flying back with Crandall from Africa, where they'd worked with Zimbabwean youngsters, that all the schools here were to be shut down.

In a January interview that appeared in these pages, Friedman said the curriculum she'd honed was "built around three pillars — tennis, health, and empowerment. . . . In tennis, for instance, the first four weeks we'll work on our forehands, the second four on our backhands, and the third four on our volleying. All the pillars are intertwined. The second is health, maximizing our physical well-being through nutrition, and the third is empowerment, building belief in ourselves."

Mindfulness was "a big part of it," she said. "Concentrating on how your wrist feels when your racket contacts the ball, for instance . . . stepping outside of yourself, taking a moment to be aware of everything you feel, with no judgment. Looking at the big picture. Mindfulness is so important in daily life."