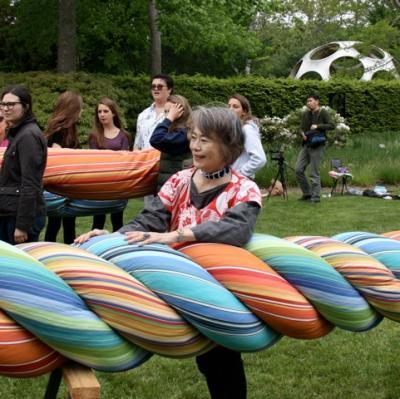 Mariyo Yagi, a longtime friend of Jack Larsen, brought the NAWA Axis for Peace project to LongHouse Reserve on May 31.
By Jennifer Landes

More than 50 participants helped create and erect a 30-foot column at LongHouse Reserve on May 31.The NAWA Axis for Peace was the vision of Mariyo Yagi, a Japanese environmental artist. She worked with the Textile Arts Center in Brooklyn to make the acres of fabric used to form tubes that were then twisted together by four groups of participants onsite at LongHouse.NAWA has multiple meanings. In ancient Japanese it is the union of NA, which means you, and WA, which means I. For the artist, it symbolizes the binding together of diverse people to yield group strength and world peace, which is why it is called the Axis for Peace. In contemporary Japanese, it has the more literal meaning of rope.When the 550-pound column was completed, the volunteers carried it to its site on the LongHouse grounds and erected it, where it will remain until 2017.