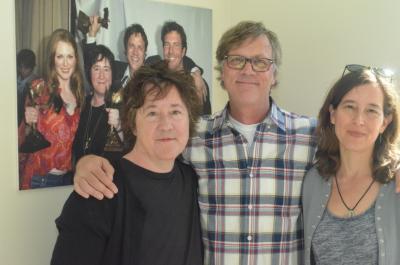 Christine Vachon, Todd Haynes, and Pam Koffler stood by a photo taken at the Independent Spirit Awards where the film "Far from Heaven" won awards for Ms. Vachon as producer, Mr. Haynes as director, Julianne Moore as best actress, and Dennis Quaid as best supporting actress. Ms. Vachon and Ms. Koffler are partners in the production company Killer Films.
By Jennifer Landes

Filmmakers participating in the Stony Brook Southampton’s summer shorts 20-day intensive production workshop were given a warm welcome on Monday with an opening discussion with Todd Haynes, the director of “Far from Heaven,” “Velvet Goldmine,” “I’m Not There,” “Mildred Pierce,” “Safe,” and many other original and provocative films.Leading the discussion was the school’s graduate program director Christine Vachon, who directs the film program in partnership with Killer Films, her production company she co-founded with Pam Koffler. Ms. Vachon, who went to school with Mr. Haynes, produced many of the films he directed, including those mentioned previously and the new film “Carol” coming out this year.His films, known for lush visuals and their adaptations and subversions of traditional narrative genres, could be rich fodder for the creative process of the aspiring directors.In the talk, Mr. Haynes spoke of his earliest inspirations, starting with the first film he saw as a child, “Mary Poppins,” through Franco Zeffirelli’s “Romeo and Juliet,” and “Midnight Cowboy,” as a young adult. Each impressed him with their cinematic style, whether it was the sets and costumes of “Mary Poppins,” the minimal approach of Zeffirelli, or the use of montage in “Midnight Cowboy.”He said his route to feature filmmaking was circuitous and his early approach to movie making followed his experiences with art. “When I drew pictures it was to copy the world as it is, then I rejected representation.” Similarly, “my first films were reactive. I wanted to take received forms and antagonize and interrupt them. It was my way of contending with my ambivalence about mainstream filmmaking.”In the short film, “Superstar: The Karen Carpenter Story” from 1987, he upended the biopic by casting it with dolls he pulled along with strings while under a table, taking eight hours to complete a shot. Yet, he said the directorial process he went through in that early film is the same as the later films with a  hundred-person set. “It’s almost harder when everything is available to you.”He told the filmmakers to “make your work. Put those scenes together. Do the same process every time.” He said that the relationships he developed with the actors and director of photography on set were the most important to each film and he listens to their ideas. And, he doesn’t look at dailies. “I want to keep that dreamlike state on the set” of what is still in his head, not what has been already committed to record. He said he feels that can wait for later.Nine directors  will make films during the next three or so weeks, shooting in locations in Southampton and Shelter Island. Melissa Bank, a Sag Harbor resident and author of “A Girls Guide to Hunting and Fishing,” will direct a scene based on her second book “The Wonder Spot” at the Islander diner on Shelter Island. Other filmmakers are from the metropolitan area or as far away as San Francisco and Iran.Films from last year's class were selected by or received recognition from the Sundance Screenwriters Lab, the Actors Studio Playwrights Lab, Black Film Festival, Atlanta Film Festival, Friars Club Comedy Film Festival, Boston LGBT Film Festival, Charlotte Black Film Festival, Jesse Thompkins III Foundation Emerging Storytellers Grant, the Henley Fringe Festival, and others.