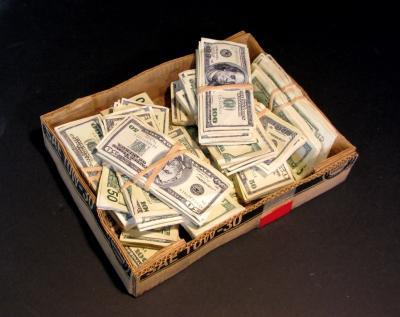 "Lunch Money" by Randall Rosenthal will be on view at the Louis Meisel Gallery booth at Art Miami this week.
By Jennifer Landes

While the actual Art Basel Miami Beach fair won’t open to the public until Thursday, many of the satellite fairs sprouting up all over Miami this week will open their doors to patrons today and tomorrow.Untitled, one of the fairs on the beach and the home of Eric Firestone Gallery and Halsey Mckay Gallery for the week, had its vernissage last night and will hold a VIP preview today before opening to the public tomorrow.Art Miami will hold its VIP preview tonight and open to the public tomorrow. Galleries based in or with associations to the South Fork will include Birnam Wood Gallery, Mark Borghi Fine Art, Keszler Gallery, Peter Marcelle Gallery, and Louis Meisel Gallery. Mr. Marcelle's gallery will show Peter Beard, Alfonso Ossorio, Larry Rivers, Dan Rizzie, and Donald Sultan in addition to some other artists not affiliated with the area. Jeff Muhs, an artist from Southampton will be at the Lyons Weir Gallery booth.Miami Project will host Berry Campbell Gallery, which is in New York City, but shows a number of South Fork artists such as Syd Solomon, Gertrude Greene, James Brooks, and Dan Christensen.Laurie Lambrecht's photography will be on view at the Rick Wester Fine Art booth at Pulse, which has its tent at Indian Beach Park.At NADA, located in the Deauville Hotel in North Beach, East Hampton Shed, an exhibition space founded in 2012 and headquartered in the shed behind the Vogel Bindery on Blue Jay Way, will show Brian Kokoska beginning Thursday.At the big fair, some of the East End artists slated to be displayed include Ross Bleckner, Robert Gober, Joe Zucker, Richard Prince, Barbara Kruger, Eric Fischl, and Mary Heilmann. Lynda Bengalis and Julian Schnabel are both scheduled to appear in the fair’s Conversations series, Ms. Benglis on Thursday at 10 a.m. and Mr. Schnabel on Saturday at 4 p.m.Most fairs will remain open through Sunday.