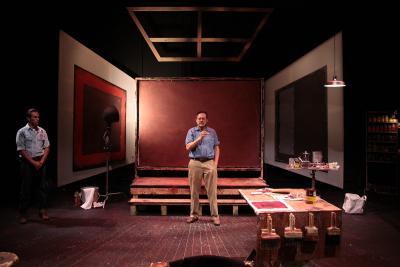 Victor Slezak as Rothko, center, discusses the function of black with his apprentice Ken, played by Christian Scheider.
By Jennifer Landes

The current production of "RED" at the John Drew Theater at Guild Hall in East Hampton is an intense 90 minutes of thought-provoking discussion and banter revolving around the life and work of Mark Rothko. Victor Slezak embodies the role of the artist, articulating it with hair-trigger intensity and bellowing a late-career cri de coeur that is as wrenching as it is sometimes purposefully grating.     Christian Scheider plays the role of Rothko’s studio assistant and subject to his insistent hectoring about the meaning and significance of art and artists. He is also a stand-in for the audience, who may feel like shouting back some of the things Mr. Scheider says at first tentatively and with greater assurance with time as he begins to see the cracks in the mortar of his mentor’s philosophy and related assertions.     Stephen Hamilton’s black box staging of the play in an intimate space on top of the stage only adds to the intensity and claustrophobia of the piece. An Adirondack chair that Rothko often sits in during the play, is a brilliant touch, echoing a famous photograph of the artist in a garage he used as a studio in East Hampton one summer in the 1960s. The chair is outfitted much like the photo with full ashtray and cigarettes at the ready and Slezak uses it as Rothko did, for quiet contemplation of his his canvases, working as much in his head as with the brushes and paint he uses only briefly in the play, but memorably.      Speaking of local, the memory of Jackson Pollock makes an appearance as another foil to the artist. In John Logan's text, he is cast as the true celebrity of the New York School and a sometimes bitter pill to Rothko, whose contemplative mode of working was often contrasted with the raw instinctual movement of his peer.    The play is articulate and dense with much to chew on and one that will stay with you long after you’ve left it. No doubt, it should be required viewing for anyone interested in the ideas and working practices of some of the most well known artists who practiced in this region. It will be performed through June 8 on Wednesdays through Sundays at 8 p.m. Tickets are $35, $33 for members, and $10 for students.A full review by Tom McMorrow will follow in next week's Star.