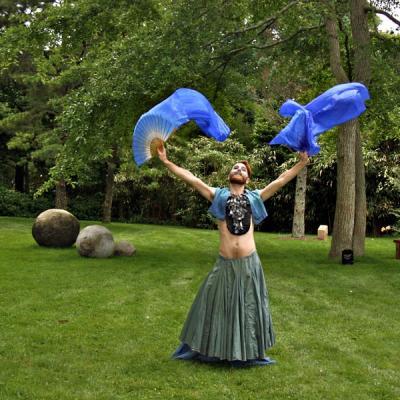 Dancers, such as Matt Knife, were stationed throughout the grounds and added drama to the cocktail party.

“White Hot + Blue” was the theme of this year’s LongHouse Reserve’s benefit in East Hampton on Saturday and the grounds and guests were done up just right.Blue drinks, blue tables, blue and white feathers, blue glassware, blue and white dresses, and blue suits on the synchronized swimmers, if not the men, made the evening festive and sporty, even for the mostly arty crowd, who walked down a blue carpet into the party. Even Bill Cunningham looked in theme in his blue coat as he snapped photos of the even more colorfully dressed.Many South Fork artists, known community-wide and worldwide, donated works to the auction and attended the event. Works in the auction from the evening’s honoree, Cindy Sherman, as well as Roy Lichtenstein, Robert Rauschenberg, and Eric Fischl, who submitted a print of “Tumbling Woman,” from the same series as a sculpture that is on view on the property, were just some of the highlights.