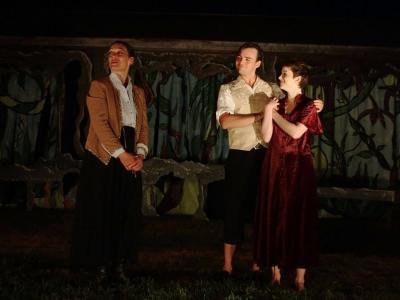 There are only three more performances of Shakespeare’s “The Tempest” at Mulford Farm, presented by the Hamptons Independent Theater Festival, known more familiarly as HITFest. If you can, see all three.The two-hour production is a delight from start to finish, harnessing a bit of Ariel’s magic to make the spare set and staging as engaging as the acting is polished and professional, rivaling Public Theater productions in Central Park I’ve seen over the years.This is a production that could. Whether it’s using a black plastic tarp and dance moves to make the storm or dressing up the performers with strings of colored lights as the dark of night takes hold, the magic of the staging is contagious and gives the audience just enough visual stimulation to make each scene palpable.The exuberance of the performers, some of them face-painted in Indian-inspired garb, transports viewers into a 1960s “Hair”-inspired revery that achieves balance in the staid demeanor and traditional costumes of the shipwrecked nobility and royalty on the island. For a moment or two, that island, as tropical and primeval as is suggested by the painted curtain, could have been here, 350 years ago, a brave new world discovered within the new world, cradled perfectly in the bosom of Mulford Farm.Bring a good bottle of wine, a comfy beach chair, a blanket, and a light meal to serve al fresco—some attendees even brought a low table and a bouquet of flowers—and enjoy one of the few true delights of an over-programmed summer.