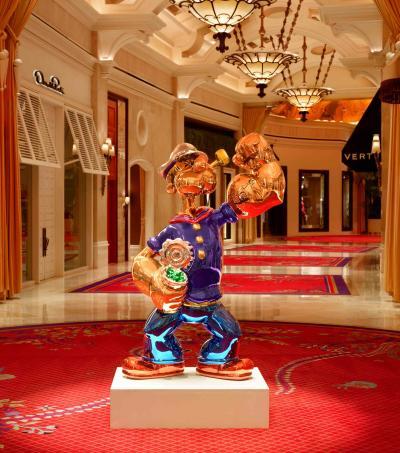 The Wynn Las Vegas resort has this stainless steel "Popeye" by Jeff Koons on display, which was purchased at auction in May for more than $28 million. A granite version of this sculpture, at issue in Ronald Perelman's suit, was valued at $4.25 million in 2011.
By Jennifer Landes

A battle between titans of the worlds of finance and art has gone to Larry Gagosian, who beat back a lawsuit from Ronald Perelman over a deal gone sour. Mr. Perelman's fraud lawsuit against Mr. Gagosian, filed in 2012, was dismissed by a New York State appeals court panel on Thursday.The court granted Mr. Gagosian's motion to dismiss Mr. Perelman's suit alleging fraud in two sales agreements he had with Mr. Gagosian's gallery. In one agreement, Mr. Perelman  was to purchase a Jeff Koons granite sculpture, "Popeye," with the intention of reselling the work. The other was for a Cy Twombly painting, "Leaving Paphos Ringed with Waves," the value of which Mr. Perelman said Mr. Gagosian had artificially inflated by having a third party buy the work prior to making it available to him. The works had a combined value of around $15 million at the time of the negotiations.In both situations, the court found that the Mr. Perelman's representatives did not provide adequate proof that fraud had occurred.Mr. Perelman in his complaint had called Mr. Gagosian a friend and adviser, whom he trusted. In the eyes of the court, however, the business transactions, done through the gallery and MAFG Art Fund, a separate company for Mr. Perelman's art investments, were "arms-length transactions" that involved no fiduciary obligations. The court also noted that Mr. Perelman and his associates "conducted no due diligence" in investigating Mr. Gagosian's claims about the market value of the works and that "statements about the value of art constitute 'non-actionable opinion that provide[s] no basis for a fraud claim,'" citing a decision in a previous, unrelated lawsuit.Mr. Perelman's attorneys suggested in court documents that they were making a larger point about how Mr. Gagosian controls the market for his artists, both through his gallery and in other sales outlets, but in the end, the suit apparently did not support its claims. Mr. Perelman’s company MacAndrews & Forbes Holdings said in a released statement that it was reviewing its options.