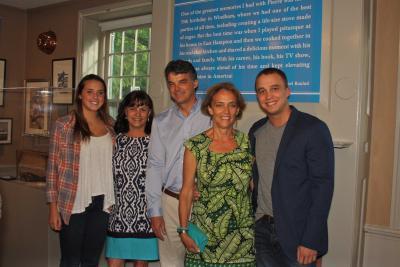 The Franey family provided the photographs and the stories behind them to the exhibition. They include, from left: Raphaelle Franey, Diane Franey, Jacques Franey, Claudia Franey Jensen, and Nick Jensen.

The South Fork and, more specifically, East Hampton have a long history of inspiring innovation in arts and letters. As artists and writers visited and then stayed for the light, scenery, and bucolic calm, culinary artists were also attracted to the same features as well as the fresh produce and seafood that defined the region’s cuisine.European chefs, accustomed to the  markets of their country’s cities and towns where farmers brought their meats, fish, breads, cheeses, and produce, fell in love with the South Fork’s own markets and roadside stands that offered similar enticements.Celebrating such a tradition, the East Hampton Historical Society has opted to focus on two such pioneers, Craig Claiborne and Pierre Franey, whose long friendship brought them together both here and in New York City where they wrote cookbooks and columns such as “The 60 Minute Gourmet” for the New York Times and celebrated years earlier what would come to be called the "farm to table" movement.In “Craig Claiborne & Pierre Franey: Cookbook Revolutionaries in East Hampton,” which opened on May 30, the historical society has brought together drawings, menus, photographs, cooking implements, cookbooks, and other ephemera to tell the story of two men whose friendship helped move America away from the can and back to the land and sea in its cooking.At the center of the show are the storied picnics the two produced on Gardiner’s Island in the summers of 1965 and 1966, which included such culinary luminaries as Jacques Pepin, who once cooked for Charles de Gaulle; Roger Fessaguet the chef from La Caravelle; Jean Vergnes from the Colony; and Rene Verdon, chef at the White House at the time. Robert David Lion Gardiner can be seen in the show’s photographs ferrying the group, which included Lauren Bacall, Burgess Meredith, Alfonso Ossorio, Danny Kaye, and Warner LeRoy, over to his family's ancestral island. Photos from the event document the journey and the food they enjoyed once there.The historical society, through the efforts of Richard Barons and Roseanne Barons, has done another bang-up job of installing the pieces so that they tell a compelling and visually interesting story. The wall labels reflect the work of Isabel Carmichael, who worked with the Franey family and their photographs to research their history and meaning.The exhibition is up through July 13.