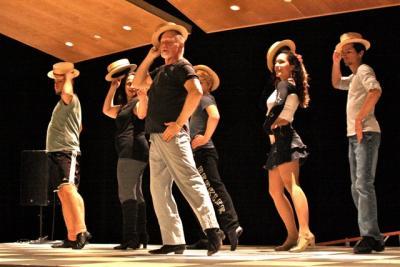 Some movement will be required of those auditioning, as captured in earlier try outs.
By Jennifer Landes

The Southampton Cultural Center has added an additional audition for “A Chorus Line” on Wednesday at 6:30 p.m. Michael Disher will direct the Pulitzer-prize winning play with music by Marvin Hamlisch, who was a long-time Sag Harbor and Westhampton resident, with lyrics by Edward Kleban, and a book by James Kirkwood, Jr. and Nicholas Dante.Although the starring roles of Zach and Cassie have been cast, there are still several roles, particularly male roles, that have not been filled.Performances are scheduled for Feb. 26 through March 21, but may have to be cancelled if a full cast cannot be found. The musical includes such iconic songs as “One,” “At the Ballet,” “What I Did for Love,” and “The Music and The Mirror.”Auditions and rehearsals will take place in the cultural center’s theater. They will require 16-24 measures of an upbeat pop song or musical theater ballad and comfortable clothing for the movement portion of the audition.Information about which roles are still available and other details can be obtained by contacting Michael Disher at [email protected].