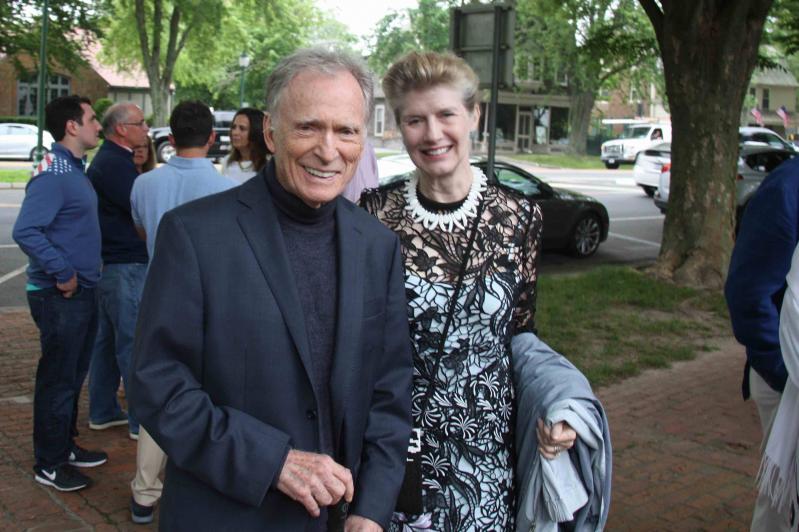 Dick Cavett, with Martha Rogers this summer at Guild Hall, will receive the first award named after him from the Hamptons International Film Festival on Oct. 5.
By Jennifer Landes

The Hamptons International Film Festival announced on Monday that it will inaugurate the Dick Cavett Artistic Champion Award at this year's festival, giving the first award to its namesake. In addition, Annette Bening will participate in the festival's A Conversation With series.Alec Baldwin, a co-chairman of the festival, will give Mr. Cavett the award on opening night, Oct. 5. It will celebrate someone who "has continued to support the arts and has made a significant impact and contribution within the industry" throughout his career. "Of course, when it came time to create an award on behalf of those in our industry who have supported artists and the arts in unique and indelible ways, we realized we not only had to name the award after Dick, but also give our first award to him," Mr. Baldwin said in a release.Mr. Cavett, a longtime resident of Montauk, was nominated for 10 Emmy Awards and won three of them during the years he hosted his own talk show. He has written several memoirs as well as articles for The New York Times, The New Yorker, and Vanity Fair.Ms. Bening, nominated for four Academy Awards and the winner of two Golden Globes and a Screen Actors Guild Award, will talk with Bob Balaban on Oct. 8 at 7:30 p.m. at the East Hampton Middle School. She stars with Jamie Bell in "Film Stars Don't Die in Liverpool," which will be screened on Oct. 8 and Oct. 9. It will open to the public on Dec. 15. Individual tickets go on sale today at noon at Obligato on Main Street in East Hampton, at the Bay Street Theater box office in Sag Harbor, and online. The festival takes place from next Thursday to Oct. 9, Columbus Day.