A commercial-scale pillaging of local waters 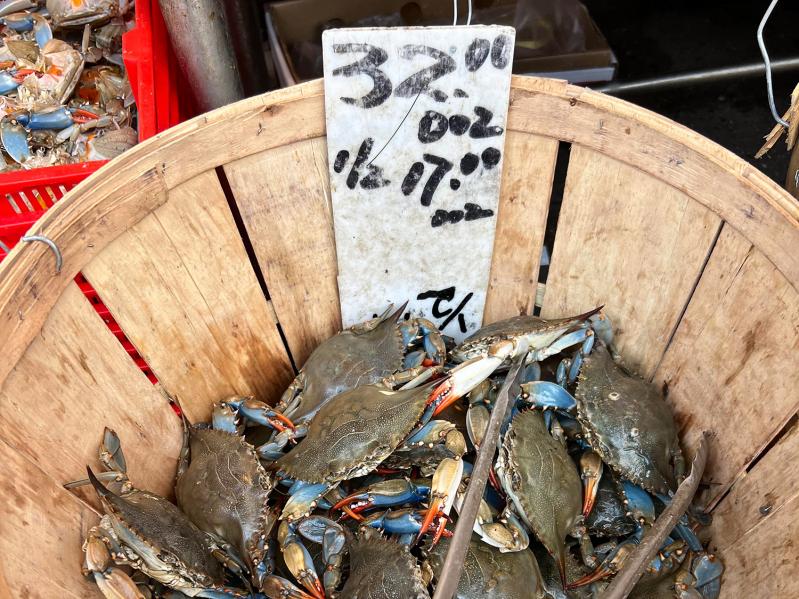 East Hampton Town trustees and Marine Patrol officers suspect that some of the blue-claw crabs taken illegally from town waters may end up at commercial markets west of here, like these undersize crabs photographed at a market in New York City’s Chinatown.
Tim Garneau
By Tom Gogola

It was a busy Saturday night on Georgica Pond for the East Hampton Town Marine Patrol as numerous people were ticketed last week for illegally harvesting blue-claw crabs — an ever-growing poaching problem, say town officials, and one that they are struggling to get the upper hand on.

The tickets were written to 16 poachers, all of whom hailed from UpIsland and New York City, and none of whom had a town shellfishing permit. The police log from that night noted that a vehicle was “dropping off dozens of people to the crabbing area of Georgica Pond” after midnight — highlighting that for every poacher who gets a ticket and loses their ill-gotten bounty, many others do not.

“They know where to go, when to go, and if there’s any police presence, they seem to have some awareness about it,” said East Hampton Town Trustee Jim Grimes.

It’s a phenomenon that ratcheted up during the depths of the Covid crisis and is reflected in the uptick in ticketing by the Marine Patrol. The agency wrote 66 shellfishing tickets in all of 2021, said Timothy Treadwell, commanding officer of the Marine Patrol, “and this year we’ve already written exactly 100, and the season is not over.”

Person power is a big impediment to a situation that resembles a game of whack-a-mole. “I wish we had enough marine officers to post someone exclusively at Georgica Pond this time of year,” said Mr. Treadwell. The Saturday night summonses were meted out by two harbormasters, Christopher Pennisi and Derek Paulsen.

The poaching problem extends to Lazy Point in Napeague Harbor, where, as Mr. Treadwell described it, poachers are “pillaging everything that’s on the bottom, versus the Georgica poachers who are just getting the blue-claws.”

And it extends to the illicit springtime harvesting of horseshoe crabs from Lazy Point, said Mr. Grimes, who broached the poaching issue at a recent trustees meeting. Horseshoe-crab blood is used to test the purity of medicine — and can fetch up to $15,000 a quart.

Mr. Grimes said he was surveying horseshoe crabs at Lazy Point earlier this year, when, as he was leaving around 2 a.m., he passed five or six cars headed to the harbor. He called Marine Patrol and said there were up to 15 people who scattered at the sight of the lawmen. “And those are the nights when you’re there and see what’s happening,” Mr. Grimes said. “It’s a different challenge than what the trustees had been used to in the past.”

The Marine Division and the trustees have considered several approaches to try and stem the tide of commercial-scale poaching in local waters, including placing signage at the hotspots in Spanish and Mandarin or another Chinese dialect. There are already English-language signs at Lazy Point and Georgica Pond that warn against harvesting shellfish without a town permit.

But as Mr. Treadwell observed, the poachers already know they’re not supposed to be taking crabs, so it’s not clear how a sign in their native language would act as a deterrent.

The penalties for poachers are reasonably stiff but clearly not deterrents, either. A shellfishing summons will set a poacher back $150, plus another $150 if they park illegally, but Mr. Treadwell said the Georgica Pond poachers have gotten around the latter problem by parking in areas where a town sticker is not required.

Mr. Grimes emphasized the well-organized aspect of the poaching operations. People will show up to hotspots with walkie-talkies, spotters, and driving in multiple batches of vehicles, and Mr. Grimes suspects there may be some app or other social-media activity afoot to keep ahead of the law. “You’re basically swimming in individuals,” he said. “This is being done on a commercial scale and I’m quite sure that all these crabs are finding their way into some commercial market and being sold.”

To that point, Trustee Tim Garneau sent The Star a photo he took on Aug. 11 of a basket of undersize blue-claw crabs on display at a Chinatown fish market. He echoed his colleagues in saying that a key to getting the poaching problem under control is public awareness.

“If we can deter them by reporting poachers . . . it would be a great help,” Mr. Garneau said in an email.

He said he spoke with Georgica Beach Association lifeguards and MBX surf-camp instructors last month and asked that they call Marine Patrol if they suspected someone was poaching.

In years past, Mr. Grimes said, the summonses were typically issued to a “guy without the permit taking a few crabs, and it had no significant impact on populations. But this has been much more on a commercial scale, when people are literally filling up commercial garbage cans, hiking back to their cars, and taking hundreds and hundreds of blue-claw crabs. It’s the same with the horseshoe crabs.”

This commercial-scale poaching, said Mr. Grimes, is taking away from efforts undertaken by baymen, who, for example, use horseshoe crabs for bait but are increasingly tuned in to the sustainability implications. “People have gotten pretty reasonable over the past couple of years insofar as sustainability,” Mr. Grimes said, “but everything that goes on out there flies in the face of this. Guys have commercial permits that allow them to use horseshoe crabs and conch for bait, and they’ve been proactive on their own in saying, ‘We’ll see how little bait we can get away with, we’ll use extenders, use fewer horseshoe crabs.’ So you have a facet of the local commercial industry that’s showing due diligence, but now finds direct competition with a non-commercial, non-resident issue. The attitude seems to be, ‘we’re going to exploit this for as long as we’re allowed to.’ “

The New York State Department of Environmental Conservation’s press office said it is aware of the mega-poaching at Georgica Pond and Lazy Point and is “collecting information and considering next steps regarding signage.” The agency said poaching is a big problem across Long Island and that it is committed to enforcement and outreach to limit the practice.

But as Mr. Grimes noted, the D.E.C. is just as strapped for enforcement officers as the Marine Patrol.