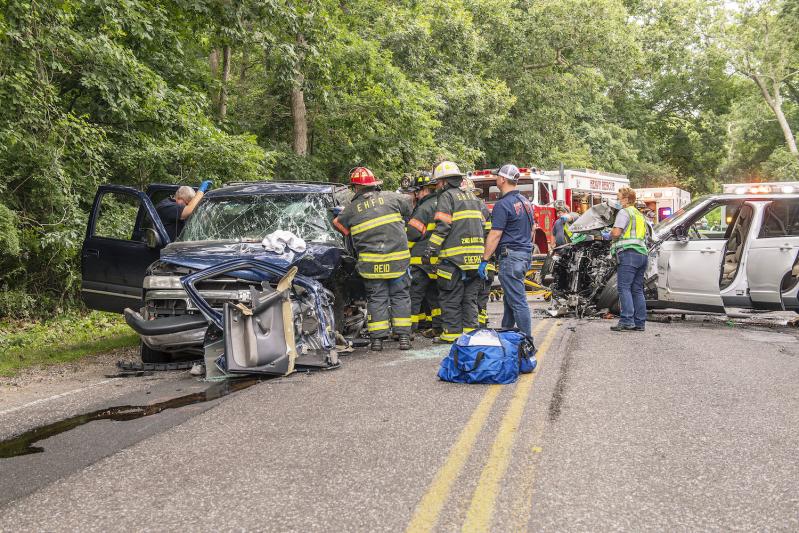 Both drivers involved in an Aug. 4 crash on Stephen Hand's Path in East Hampton were taken by ambulance to Stony Brook Southampton Hospital.
Michael Heller
By Bella Lewis

A few more details have emerged regarding an accident reported here last week, in which Paul Brennan of Sagaponack had to be extracted from his 2020 Land Rover after a near head-on collision on Stephen Hand's Path near Two Holes of Water Road, East Hampton.

Mr. Brennan, 68, told police he did not remember anything prior to hitting Douglas Jarvis of Huntington, also 68, who was driving a 2001 Chevrolet. Mr. Brennan was pinned inside the Land Rover until East Hampton firefighters cut him out of it.

Both men were taken by East Hampton ambulance to Stony Brook Southampton Hospital, Mr. Jarvis for hip pain and Mr. Brennan for elbow pain. Both cars were totaled and towed.

Police also noted that Andrea Lalvaysegovia, 29, of Washington State, had swerved her 2016 Nissan into a tree to avoid hitting the Chevrolet, but incurred neither injury nor serious car damage.

Thanh Tran of New York City, 43, hit an East Hampton Town equipment vehicle on Aug. 2 around 8:30 a.m. while turning her 2020 Tesla from Montauk Highway into South Essex Street in Montauk. She told police she'd looked both ways before making the turn, but Randolph Kendall of East Hampton, 48, who was driving the Tennant Litter Vacuum, said that from what he saw, Ms. Tran was on her cellphone and did not yield the right of way.

The litter vacuum truck overturned. Mr. Kendall was able to jump off in time, but sustained hip pain and was taken by Montauk ambulance to Stony Brook Southampton Hospital. A witness corroborated that Ms. Tran was on her phone, according to police.

Deer were caught in headlights in Sag Harbor on the evening of Aug. 3, at the cross of Jermain Avenue and Oakland Avenue, and again on Friday at around 7:30 a.m. in Montauk, at the intersection of Montauk Highway and Beech Street.