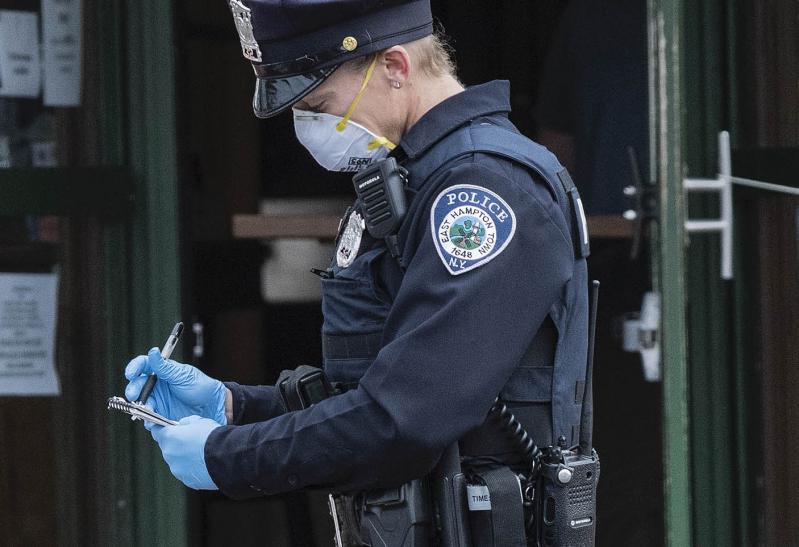 Despite the unprecedented challenges of policing during a pandemic and nationwide scrutiny in the wake of multiple civilian deaths while in police custody, Chief Michael Sarlo was upbeat in summarizing the East Hampton Town Police Department's annual report to the town board on Tuesday.

"The onset of the Covid-19 pandemic, ever-changing safety protocols, state business regulations, and increased demand on our resources throughout the year made for unprecedented challenges," the chief wrote in summarizing the report. "It was our goal to fairly work within the framework of executive orders and assist our business owners and residents in safely navigating this public health crisis."

The department, he said, has "worked tirelessly to build on our already existing positive community relations efforts" and embraced the New York State Reform and Reinvention Collaboration process and feedback from a committee formed as part of the program. "We are fortunate to have a supportive and respectful relationship with our citizens," the chief said, "and communicating department protocols, training efforts, and operational challenges while listening to community concerns and working toward greater mutual understanding will continue to lead us toward a true partnership between the Police Department and the residents."

Chief Sarlo noted a sharp reduction in motor vehicle accidents and overall enforcement efforts in 2020, as the pandemic kept residents at home and police contact with the public was reduced before safety protocols were established. "A large portion of the workload focused on emergency response and quality-of-life efforts, including with Covid restrictions."

"It is also important to note" very few interactions with federal Immigration and Customs Enforcement officials in the town, he said, "and minimal civilian complaints the department receives each year." There were no civilian complaints lodged against police in 2020, he said.

Goals in 2020 included an assessment of department procedures and protocols under the state's new Criminal Justice Reform Act. Given the steep reduction in enforcement activity, "the overall impacts of managing department procedures are difficult to evaluate," according to the report. "The department did see a dramatic increase in patrol time lost and overtime expended on completing arrest packages through the new process, despite the reduction in arrests."

Another goal, to continue improving and expanding training for response to individuals with mental health and related disabilities, went unrealized, as "almost all of our outside training was cancelled during 2020," the report states. "We will again make this an effort and goal for 2021 in hopes that training opens up again."

A third goal, to improve and increase translation services for non-English-speaking residents, was largely accomplished, with Spanish-speaking officers and civilians put on call to respond to situations requiring their services. The department reached an agreement with Organizacion Latino-Americana of Eastern Long Island to accept a donation of mobile phones for each vehicle for use of the AT&T language line (an over-the-phone translation service), streamlining what would otherwise be a time-consuming process.

Efforts toward another goal, to continue to evaluate impacts on department efficiency and officer development of the 12-hour-tour work chart, have fallen short, the report states, owing to a staffing shortage brought by line-of-duty injuries, resignations, retirements, and Suffolk County police not hosting a police academy in 2020. "The department is left in a difficult position and can no longer justify working the 12-hour tour patrol chart." Staffing and supervision fell, while overtime and patrol time spent on arrest processing continued to increase, the result being the pool of available off-duty personnel to fill in on 12-hour shifts shrinking to levels "where the department can no longer safely and adequately backfill staffing when needed."

The pandemic "obviously spread our officers across numerous ancillary duties relating to state restrictions and guideline enforcement, etc., during 2020; however, the overwhelming data and ultimately staffing crisis has led the department to return to the eight-hour tour patrol duty chart in 2021."

While arrests fell sharply last year, there was a small uptick in larceny. There were many more occupied residences in the town in 2020 versus a typical year, the chief said, with a commensurate reduction in residential burglaries and incidents of trespassing and emergency response to alarm systems.

Consequently, however, residential noise complaints nearly doubled, from 665 in 2019 to 1,116 last year. Most of the calls, the chief said, were about small gatherings with attendant noise, and "neighbors concerned as to whether gathering limits were being violated." Commercial noise complaints "bottomed out," from 87 to 31, with businesses reducing occupancy and closing earlier during the pandemic, "which also pushed people to residences."

Suicides and overdoses did not spike in the community, the chief said with evident relief, nor did incidents of domestic violence.

Twenty-one officers were injured in 2020, an increase of five over the previous year, which the chief attributed to exposure to the coronavirus or other communicable diseases.

The chief recognized Nicholas Lloyd, the department's police officer of the year for 2020. Mr. Lloyd "had a tremendous year," he said, having been involved in several in-depth felony investigations.