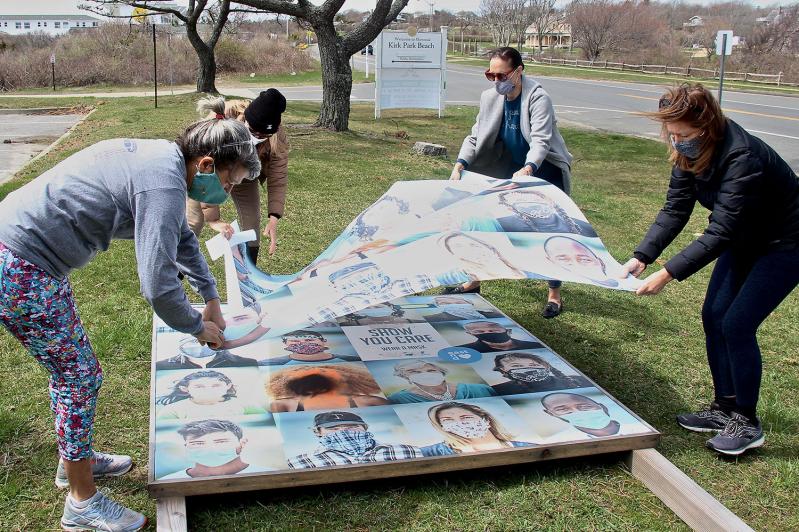 On Tuesday in Montauk, volunteers with East End Cares worked together to cover a vandalized sign with a fresh one.
Durell Godfrey
By Bella Lewis and Christine Sampson

Social justice advocates are hoping to turn a case of racist vandalism in Montauk into a conversation starter toward positive change.

For the last several months of the pandemic, a billboard encouraging people to “Show You Care — Wear a Mask” stood untouched by the side of Main Street in front of the Kirk Park parking lot, one of several such signs erected by the group East End Cares throughout the town. The billboards depict 15 faces, eyes smiling, masks over their noses and mouths.

But last week, many who drove past the Montauk billboard noticed that one of its faces had been covered with orange and black spray paint. It was the face of Tanish Lindsay, a Montauk resident who organized Black Lives Matter demonstrations in the hamlet in 2020 and is also active in other social justice initiatives as part of her organization, There’s Some Good News. Ms. Lindsay is one of two Black people pictured on the billboard; the other image was not defaced.

”It’s the first big sign you see entering Montauk, and it’s about diversity and safety — nothing to do with me personally,” said Ms. Lindsay, who wondered if the resistance she had encountered in the hamlet, when she encouraged local businesses to hire more diversely, had anything to do with it.

The sign, she said, was “just showing love,” and trashing it was “disrespectful to the other people on it and people who worked so hard putting that together.”

The incident scared Ms. Lindsay a little, considering that crimes of that nature often foreshadow others. “My family is telling me to move and go to Florida, where they are. I can’t really leave. It’s bigger than what I’m doing. So many people put so much effort into helping me get this far.”

While Ms. Lindsay is not going to leave Montauk, as “I’m sure that’s what they want,” she said, she is going to move to a more secluded street. “People wanted me to report it as a hate crime, but I feel like it’s more to do with my project than anything.” She would be happy to talk to whoever did it. “Maybe they’re not really understanding my whole project.”

On Tuesday, Katherine King, a new member of the East Hampton Town Anti-Bias Task Force who volunteers with East End Cares, gathered some friends to pitch in and replace the billboard with a new one.

”Some people will call it a hate crime. I call it an example of pain in our community,” Ms. King said just before the group of 10 volunteers erected the new sign. She said the vandalism should be the starting point for a “no shame, no blame conversation” about racism, bias, threats, true “allyship,” and love for fellow humans.

”We’re in a position to speak to the privileged community and say, some people don’t feel safe here,” she said. “People are afraid to speak up. That’s why we need more active allies.”

”Change is a process, not an event,” Ms. King later continued. It has been “decades, if not generations” in the making, she said. “We have to fight this with love, with compassion, and with the understanding that someone who did this is in pain.”

P. Claire Pertalion, who has lived in Montauk for 15 years, pulled a broom out of her sport utility vehicle and swept the dirt off the billboard. Next, she retrieved a staple gun and drill to attach the new sign to the billboard frame. Then she dug into the ground with her bare hands to deepen the postholes.

”I’m originally from the South. I grew up around so much racism that I don’t have any tolerance of it. That’s why I left,” Ms. Pertalion said. “We can’t escape racism. It’s everywhere. A lot of it is about education.”

While the original billboard was on the ground, the volunteers looked at it more closely and discovered it also had stickers on it expressing support for former President Donald Trump. When the new one was upright, the volunteers clapped and cheered.

Melissa Berman, a founder of East End Cares, called the vandalism appalling. Of the new sign, she said, “This signifies that this is a community that cares about each other.”