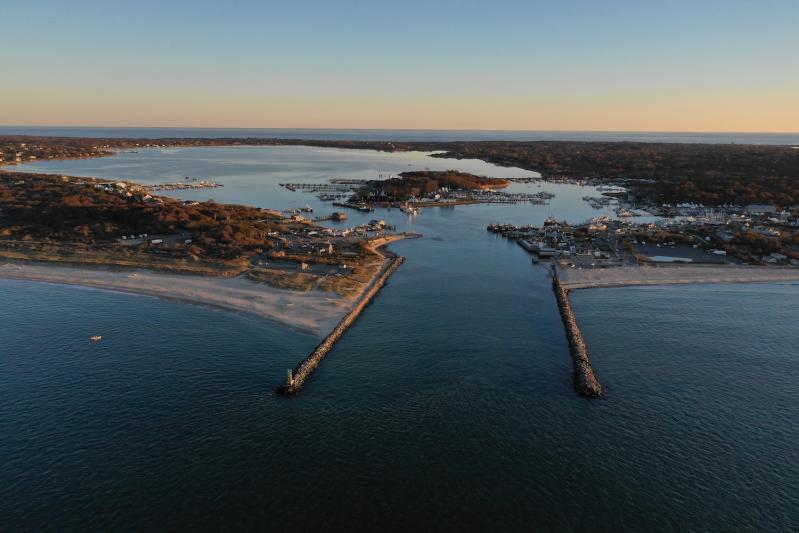 Some Montauk residents have complained for years about loud blasts they heard coming from a house in the West Lake Drive area.
Christopher Bustamante
By Christine Sampson

On the lookout for explosives, the Federal Bureau of Alcohol, Tobacco, Firearms, and Explosives aided the East Hampton Town Police Department in the search of a Montauk house on Sept. 16, for which they had a state-issued warrant.

The raid resulted in the arrest of Steven Washburn, 65, after officers said they found "a quantity of dangerous fireworks" in his garage on West Lake Drive. He was charged with unlawfully selling fireworks with a value of $500 or more, a misdemeanor. According to a police report, there were 69 mortars and shells of various sizes plus 15 crackling stars.

The report categorized them as "1.3 G1," meaning display fireworks, as opposed to 1.4 G1, which are consumer fireworks. Those that pack a much larger punch — such as M80 and M100 explosives — are illegal, according to the American Pyrotechnics Association. "Some members of the public and media incorrectly refer to these devices as fireworks," the association notes on its website.

Mr. Washburn was arraigned by East Hampton Town Justice Steven Tekulsky and is due back in court on Dec. 16. He is represented by Rita Bonicelli, who declined to comment on his behalf this week.

Mr. Washburn's arrest followed months of reports to The Star from Montauk residents who said they have been shaken numerous times by the blasts they heard coming from a house in the West Lake Drive area. They alleged that the explosions had been happening for years, but suggested they have been going on so long that calls to police have petered out — something admitted by even the most outraged people who spoke anonymously to The Star earlier this year.

Chris Bombardier, a spokesman for the federal A.T.F.E.'s New York department, said the agency hasn't received any formal, written complaints, and that it handed the case over to the town police after the initial raid on Sept. 16.

On Sept. 12 at 9:26 p.m., town police responded to a call from a North Greenwich Street resident about an explosion in the area. Detective Sgt. Daniel Toia said officers were "unable to locate any sign of fireworks or explosions." He said they did inquire about it of Mr. Washburn, who "denied any knowledge" of the incident.

Asked what signs there were that the defendant was selling the fireworks, Detective Toia said, "The sale is an assumption under the law when you possess so many types or a certain monetary amount of fireworks."

In a Sept. 16 statement to the police, Mr. Washburn's girlfriend of 15 years, Lorraine DeRose, who owns the West Lake Drive house where they live in the summers, said she has "never seen Steven with any type of firearms or other weapons," but confirmed that he stores fireworks in the garage. Ms. DeRose also wrote that he set up three PVC tubes in the back yard to light them up on the Fourth of July "and then randomly throughout the year on special occasions."

"I don't know where Steven gets his fireworks from," she wrote. "I just know there is a contact in his cellphone under the name 'Independence Guy,' or 'Man,' I can't remember exactly."

Mr. Washburn is the owner of a construction company, storing most of his equipment on a vacant lot at the Snug Harbor Motel that Ms. DeRose's family owns, she said.

In June, when contacted by The Star, Mr. Washburn was cordial and polite on the phone. He said he did not have any idea why he was being asked about explosions.