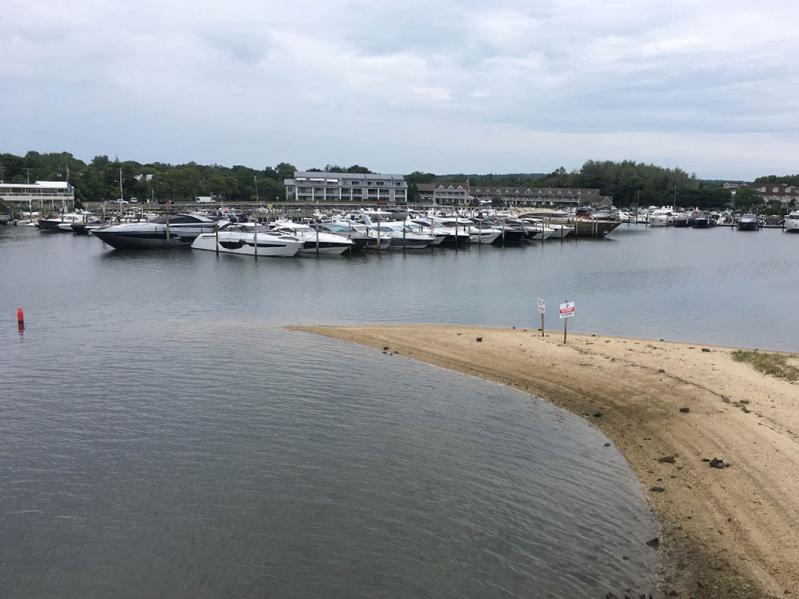 From the North Haven side, Sag Harbor Cove might look safe for swimming, but a strong current nearly pulled six people to their deaths there on July 26.
David E. Rattray
By Bella Lewis

The full extent of what happened in Sag Harbor Cove on July 26, a sunny Sunday when a Brooklyn family went fishing by the North Haven bridge and almost lost their lives in a fast-moving current, was not known until this week. Based on police reports, The Star reported last week that three people had been rescued, but it is now clear that as many as half a dozen had come close to drowning.

It had been a day of remarkable bravery and timing. "Things like that don't work like that. A 30-second, 40-second difference is a whole other chain of events," said Frederic Friedman, 56, one of the men who helped rescue the six people who might otherwise have lost their lives near the bridge that afternoon.

"Usually, you don't get them back."

Mr. Friedman is a commercial diver who knows very well how strong the current there is. "I spend my life underwater here at slack tide, that's where I make my living." He said he pulls people fighting the current out of the water on a daily basis.

What Sag Harbor Village police initially reported as three victims and three rescuers turned out to be a 12-person operation: six whose lives were at risk, and six more risking their lives to save them. Three of those in trouble were children between the ages of 10 and 13.

Nate Hochstedler, 27, an employee of the Sag Harbor Cove Yacht Club who responded to the emergency on a personal watercraft, gestured to Angel Mesa, 25, and Robert Anderson, 39. "These guys are the ones who created the moment for them to be above water."

Both Mr. Mesa and Mr. Anderson are boat captains. "The crazy thing is, they were all getting ready to leave. All the guests were on board, and they were the ones who saw. If no one saw them, we would have had bodies. Everyone jumping into panic mode created a little bit of time," said Mr. Hochstedler.

When Mr. Mesa and Mr. Anderson saw six bodies floating face down in the water, they dived in, along with Riccardo Pavoncalli, 60, a boat owner, and another man associated with the club whose identity was kept private.

"I don't know how, but we did it," said Mr. Mesa, who said he used all his energy just to swim over there. Though familiar with the water, Mr. Hochstedler made the point that it is not as though any of them have formal training or have done lifesaving exercises.

The responders did not believe any of the victims knew how to swim and commented on the rip in that part of the water. "Once you get in it and try to swim against it, you're done. It really was probably a chain reaction. The mom jumps in and she starts panicking, then the dad jumps in, everyone jumps in, and it's just... " Mr. Hochstedler groaned at the snowball effect.

"And then, here goes us! Let's go jump in with them too!" Mr. Mesa said sunnily, laughing.

The whole thing unfolded in about five minutes, the rescuers said. Mr. Hochstedler saw people running toward the dock and caught sight of Mr. Anderson trying to grab one of the victims with a life ring. "Anything you throw from the dock is just going to keep going downstream. That's why this life ring that I looked at, there's no way I can get this to them, and they're not swimming to it," he said.

Taking a moment to consider the current, which he estimated at three or four knots, Mr. Hochstedler knew a Jet Ski-type watercraft would be more efficient, since the rescuers were swimming upcurrent.

Meanwhile, Mr. Pavoncalli and Mr. Anderson, who threw up a lot of water, were already on the beach resuscitating one victim. Mr. Friedman, also E.M.T.-certified, took over from them after speeding over in his dinghy. "I got to the first guy. He had agonal breathing, so I rolled him onto his side, and basically his upper lung dumped out a lot of pink froth, and he restarted breathing a little bit and then a little more." He then did the same for one of the two girls.

Everyone was conscious by the time ambulance personnel arrived, but moments before they had been pale white, with their eyes rolled back in their heads. "These people were under, pulling them up. It was, like, 30 seconds away from them having too much water in their lungs," said Mr. Friedman.

The six victims threw up everything they ate that day, Mr. Mesa said.

"Right after, I was like, wow, I should have done this, this, this, and this," reflected Mr. Mesa. "All those thoughts come after, like, what could we have had with us to be safer? A life jacket? Which Robert was waiting for, but then a girl was yelling at him to jump in the water, so by the time someone came out the door with a life jacket and a life ring for him, he was already in the water. Because that second of difference. If I was one minute, not even, if I was 10 seconds late, they were dead. If we didn't do what we did, they were dead."

Mr. Mesa tried to float to conserve energy, but when one woman regained consciousness she started panicking and pushing him down. "That's the climbing-the-stairs effect; everyone does that. It's scary," said Mr. Hochstedler.

"I'm telling her, 'Relax. I already got you.' She couldn't relax," said Mr. Mesa, who explained his goal was to just keep everyone's head above the water. "I'm staring at her daughter floating in front of me like, damn, I can't go, if I use this energy that I have I'm gonna drown with you. So it was very hard. I haven't stopped thinking about it," he said. "The sad part is, I had to let her go two or three times, I had to push her away from me, because I was gonna die myself. Then when I saw Nate on the Jet Ski!"

"There was definitely some adrenaline pumping for three hours after that," said Mr. Hochstedler, who, along with Mr. Mesa and Mr. Anderson, went to work straight afterward.

"If you can add, in the paper, have people be cautious of the current, because if people actually are reading that and they're swimmers and they're boaters, the current is not a joke," said Mr. Mesa. Mr. Hochstedler agreed. "It's real, and it will take your life. I think they put a sign up over there now about dangerous currents. It's under this bridge. When the tide changes and there are moon tides and stuff, it rages through."

Mr. Mesa chimed in. "Oh, I forgot to tell you guys, the day after, I saved eight people. They jumped off the boat and the current takes them and they think they can swim back and it's, like, 'you're not swimming back.'"

And as to how worried their families must have been? "Oh, I haven't even told my mom." Mr. Hochstedler said.