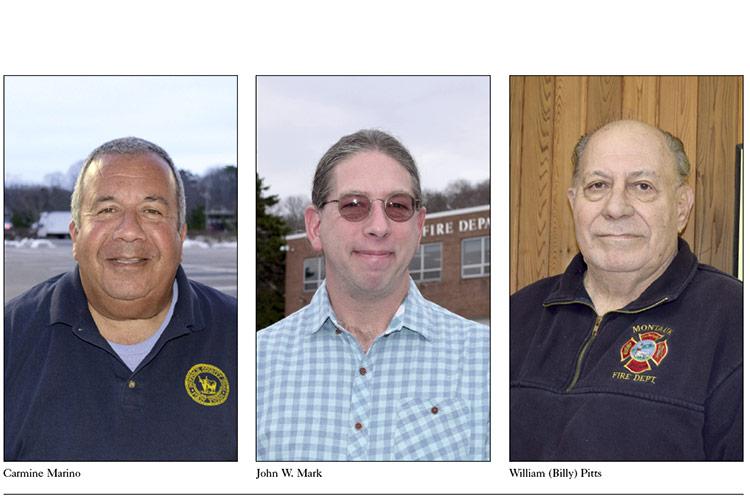 Voters will go to the polls on Tuesday to elect fire district commissioners, whose job it is to oversee tax dollars spent on fire services, emergency medical care, and other duties. In East Hampton Town, the only race is in the Montauk Fire District, where three people, Carmine Marino, William Pitts, and John W. Mark, are running for one open seat. Richard Monahan is not seeking re-election.

Anyone registered can cast a vote in fire district elections; they need not be a member of the fire department.

Mr. Marino, 64, served two terms as a fire commissioner from 2008 to 2017; he chose not to seek re-election in 2017. However, he missed the position and is ready to rejoin the board. He would be its only member who is not also in the fire department, a rarity, he said. His wife and son are both members of the department, she as an emergency medical technician and he as a firefighter.

One reason he wanted to get back to his responsibilities with the district, he said, is that he sees some challenges ahead. Montauk’s contract with East Hampton Village for dispatching services is almost ready for renewal, and during the last negotiations, he worked with commissioners from other districts to avoid what had been a standard 4 percent increase. The board is always tasked with setting taxes while also providing necessary services.

Mr. Marino is semiretired. He was an assistant civil engineer with Suffolk County’s Department of Public Works, Sanitation, and Industrial Waste, and  works two days a week for the county mentoring new employees in that department.

Mr. Pitts is a 57-year member of the fire department and a former chief who served in the early 1990s. He served 18 years in the ambulance company and is a former advanced E.M.T. He helped to start the dive team and the junior firefighting program for 13 to 18-year-olds, and is now a member of the fire police company.

At 79 years old, Mr. Pitts said he has plenty of time to devote to the board. He likes to stay busy, he said; he tried to retire three times but is still working part time, driving a bus of high schoolers from Montauk to and from East Hampton.

Mr. Pitts said he decided to run because Mr. Monahan had decided to retire. Mr. Monahan, he noted, was instrumental in starting Montauk’s paid-paramedic program, the first in East Hampton Town. Mr. Pitts believes in the program and wants it to continue success fully. While he has not attended board meetings of the fire commissioners, he said that “there is always room for improvement.”

Mr. Mark, 54, said he decided to run for several reasons, among them that he thought he would fit well into Mr. Monahan’s role on the board. Mr. Monahan is in charge of overseeing the maintenance of the fire department’s fleet, and Mr. Mark said he has experience in that area. He is a property manager for a private residence and owned a landscaping business for several decades.

He also brings some experience with finances, having served on the department’s budget committee for two years; he has an accounting degree from the State University at Geneseo. A past president of St. Michael’s Lutheran Church in Amagansett, he was on the board of the senior housing complex there.

Mr. Mark, who moved to Montauk in 1984, joined the fire department about three years ago and quickly became an E.M.T. “We have such a great department. We are so blessed out here. It would be an honor to continue that” as a commissioner, he said.

Voting takes place at the firehouse on Flamingo Avenue on Tuesday between 2 and 9 p.m. There are no propositions on the ballot.

In other fire districts, the candidates are running unopposed for another five-year term. They are John M. (Jack) Emptage in Amagansett, John O’Brien in Bridgehampton, and Leander Arnold in Springs. The East Hampton and Sag Harbor Fire Departments are overseen by their respective village boards.

Mr. Emptage has served as a commissioner in Amagansett for the last decade. He is the president of Billing Services Inc. in East Hampton Village.

In Amagansett, there is also a proposition on the ballot to establish a capital reserve fund for the purchase and acquisition of Firematic and emergency equipment, separate from its current fund to purchase vehicles. Jessica Cantwell, the district’s secretary-treasurer, said the new fund would be used to buy equipment such as air packs and an air compressor, a machine used to fill air bottles.

In Springs, Leander Arnold, the vice chairman of the board and a retired masonry contractor, is running for a second term. He was first elected in 2015.

The Springs Fire District needs voters permission to use $225,000 from its equipment reserve fund to purchase a new rescue truck from Hendrickson Fire Rescue. The truck, a 6500 Chevrolet Silverado Rescue 1, will cost $425,000, the balance of which will be borrowed. The truck would replace a 1991 GMC that lacks updated safety features and is said to be no longer cost effective.

In Bridgehampton, John O’Brien is running for re-election after one term on the board. He first began serving as a commissioner in 2015.

There is a referendum on the ballot similar to one that taxpayers voted down in 2013, to shift the job of district treasurer from an elected position to an appointed one. There is currently no elected treasurer. When no one ran for the position last year, the board appointed its secretary to fill it.

Voting in Amagansett, Bridgehampton, and Springs is from 6 to 9 p.m. at the respective firehouses.