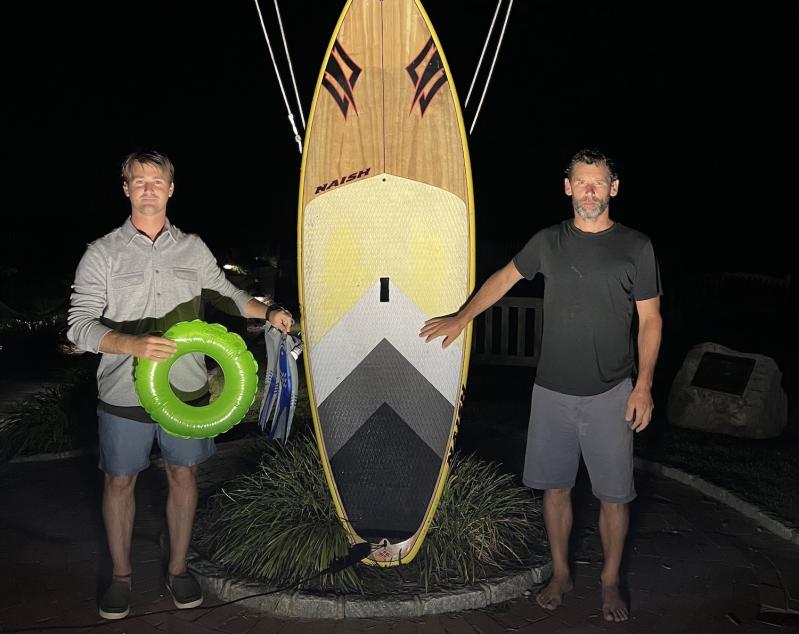 On Saturday night well after the hours when most lifeguards are home and dry, Thomas Casse was at a dinner party at the Montauk Shores Condominiums just east of Ditch Plain when another attendee, Sophie Walton, first heard a faint cry for help.

"It was a still night, zero wind, the moon was coming out," said Mr. Casse, 31, a surf instructor with Corey's Wave and an assistant teacher in the Sag Harbor School District. "We were on the deck overlooking the ocean when a shooting star went by, and everyone got quiet for a second. In that quiet, I also heard a cry in the distance," he said.

Mr. Casse and his friends ran down to the beach, where there was a bunch of kids. "I thought maybe they were playing a prank," he said. He spotted a fisherman close to the water walking toward him and heard a very clear call for help coming from the ocean. "The way the sound was echoing, bouncing off the cliffs and cove, it sounded like it was coming from everywhere," he said. One thing became clear, however: This was no prank; a person was calling for help from the water.

As a surf instructor, Mr. Casse is a certified lifeguard. He was also an emergency medical technician in New York City. Without thinking too much about it, he jumped in the water "with all my clothes on," and started swimming toward the sound. "I couldn't see her, but I kept hearing her," he said. Then for a couple of minutes, she stopped calling, and Mr. Casse was out there alone in the darkness.

Along the shore, Ms. Walton and another friend, Sarah Africk, were helping to guide efforts. Meanwhile, Dave Watson, whose dinner party was quickly turning into something more, started out after Mr. Casse on a paddleboard that someone had borrowed from Jimmy Buffett's trailer.

"I was 100 yards off the beach in the pitch black and I started to think, 'I'm going to get attacked by a shark out here,' " said Mr. Casse. Just when he feared the distant swimmer had drowned, she started calling again and, remarkably, had drifted directly into the light of the moon, allowing him to spot her, but she was still a football field away.

His clothes now soaking wet and heavy –  "It wasn't the most efficient paddle out" said Mr. Casse – he was nonetheless able to reach the 32-year-old woman, Mon G-Thao Vu of the Bronx, who was wearing a child's "inflatable inner tube around her neck, goggles on her head, and swim fins," said Mr. Casse.

According to the police report, Mr. Casse had swum for hald an hour before finding Ms. Vu.

"I wasn't sure what was going on," he said. When Ms. Vu told him she had a cramp in her leg and couldn't swim, the thought crossed his mind that he was somehow being set up. He wrapped his arm around her, and began to swim toward the shore.

Two hundred yards from the beach, and in the light of the moon, Ms. Vu told him that she had gone out snorkeling west of the Ditch jetty some time earlier. Mr. Casse surmised she was caught in a rip current, and with the incoming tide had been pulled out much farther than intended. Mr. Casse swam her halfway to the beach before Mr. Watson showed up. "I paddle pretty fast and it took me 10 to 12 minutes to get out there," said Mr. Watson, who also goes by Big Air Dave. He believes Mr. Casse was much farther out than 200 yards.

"He had her in a cross-chest carry, bringing her in," said Mr. Watson. Together, they brought her onto the beach with the paddleboard, where Ms. Vu coughed up salt water.

Ms. Vu was coherent enough to tell them her name, but she was confused and in shock. "She was very hypothermic," said Mr. Casse. The group of dinner party saviors helped Ms. Vu to the police and E.M.T.s, who transported her to Stony Brook Southampton Hospital.

"The guys in Marine Patrol were amazing," said Mr. Watson.

Mr. Casse credited the East Hampton Town lifeguard program for the save. "Those are the guys who trained me," he said.

"When the ocean is flat and winds are offshore, we worry about people on inflatables getting pushed out further than they're expecting," said John Ryan Jr., head lifeguard for East Hampton Town.

Last week it was "Lake Atlantic out on the ocean," so the lifeguards haven't been too busy. "We're keeping an eye on the marine life though, there's been lots of that."

On Aug. 10, lifeguards temporarily closed beaches to swimming in Amagansett and East Hampton Village after a surfcaster hooked a six-foot spinner shark in Amagansett. The shark was attracted by a huge ball of baitfish that was also drawing bluefish and striped bass.

Drew Smith, head lifeguard for East Hampton Village confirmed the abundance of marine life, as well. "There's a lot of bait out there. We had six or seven humpback whales through the day Sunday." Mr. Smith reported one save from each of the three lifeguard towers at Main Beach in the last week, but no injuries.