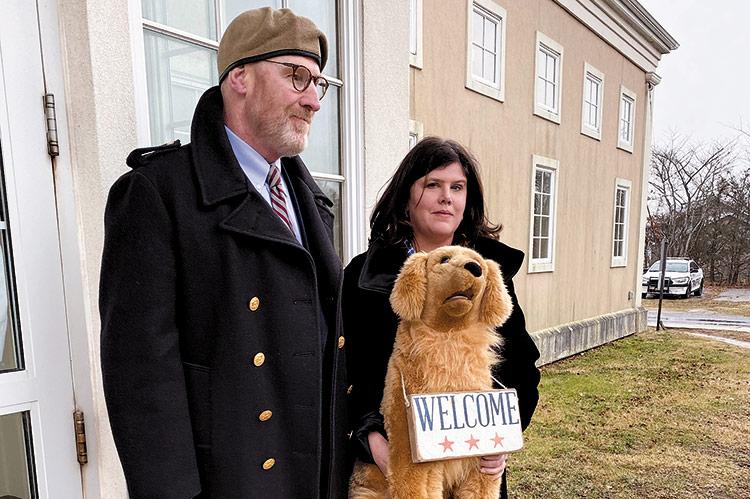 The trial of the owner of the Petit Bleu children’s store in East Hampton Village, who was cited by code enforcement for placing two stuffed golden retrievers, one adorned with a WELCOME sign, at the entrance to her shop, was held Monday in East Hampton Town Justice Court, Justice Lisa Rana presiding.

Colleen Moeller, the storeowner, was charged in November with two code violations, illegally displaying merchandise outdoors and having an illegal sign. Village code states that the “display and sale of all goods or merchandise [must be] confined to the interior of the building,” and “no signs . . . used to advertise or attract the attention of the public shall be displayed out of doors.” Ms. Moeller could be fined up to $1,000 or be sentenced to up to 15 days in jail if found guilty, said Daniel Rodgers, her attorney.

Mr. Rodgers argued that since the stuffed animals were Ms. Moeller’s personal property and not for sale, she should not have been cited for illegally displaying merchandise. He asked Robert Jahoda, the code enforcement officer who cited her, whether he had checked to see if the items were for sale. Mr. Jahoda replied on the witness stand that the code says “for sale or display.”

On the charge of having an illegal sign, Mr. Rodgers said the code was “overly broad, and so confusing, that anything would qualify.” The code defines a sign as any object or device used to “advertise . . . by means of letters, words, figures or colors.”

To emphasize his point, Mr. Rodgers placed a bright green welcome mat on the floor of the court, saying that given the color and writing on the mat, it would be considered a code violation. Mr. Jahoda, however, said the village would not consider it one.

Justice Rana said she would issue a written decision in the coming days.

“We made a very good case that it wasn’t merchandise for sale,” said Mr. Rodgers after the trial, sounding optimistic that the court would rule in Ms. Moeller’s favor on that count. “He is a nice young man,” the lawyer said of Mr. Jahoda, “but he didn’t do his job, because he didn’t check to see if any of the items were for sale.”

As for the sign violation, “I think we have a reasonable argument,” Mr. Rodgers said, but he wasn’t quite sure whether Justice Rana had been convinced.