‘You want to run in and help . . . but you have to step back and take a deep breath' 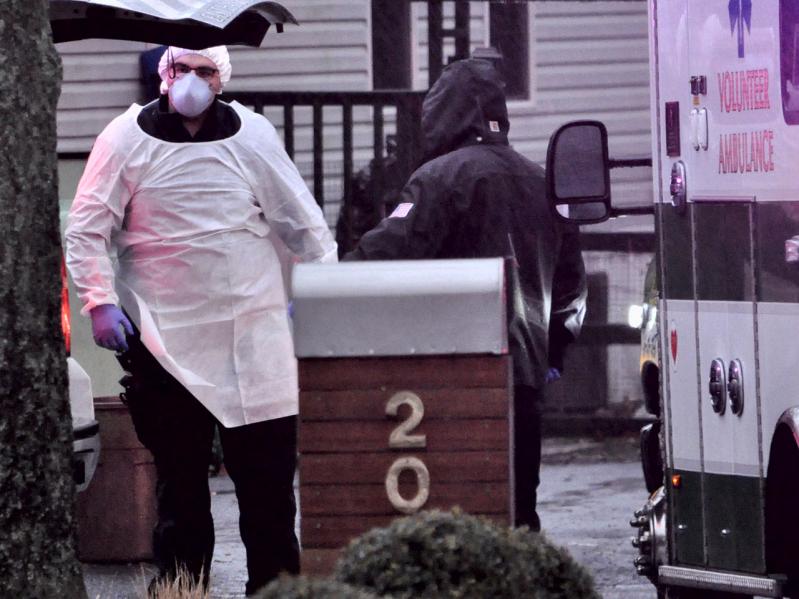 As COVID-19 continues to spread, first responders on the South Fork are continuing to work, albeit while taking extra precautions.

“We’re all hanging in tight here. Keeping it as normal as we can,” Sag Harbor Village Police Officer Kelly Anderson said on Monday.

Ms. Anderson said 911 dispatchers are asking callers about potential symptoms before sending officers to respond. People are being asked, even those in need of emergency medical assistance, to meet the police and E.M.S. responders outside, rather than in a house or place of business. Officers are keeping a safe distance when they can.

“Sometimes you have to pause and step back,” Ms. Anderson said. “The first thing you want to do is run in and help somebody . . . but you have to step back and take a deep breath, make sure you’re not only taking care of yourself but your co-workers too.”

Risk is something officers always live with, she said. “You always want to take those standard precautions.”

Now, though, police are even more attuned to their surroundings.

“The main thing is, we’re a small department. If one person is affected by it, it’s going to be all of us,” Ms. Anderson said.

Sag Harbor Village has always been a tight-knit community, and the community support and cooperation has been nice to see, she said, even if people were walking around the village together during the sunny weekend. She said the nuns at Cormaria Retreat House called to check in on the officers.

Some officers are taking extra care not to take the coronavirus home. “My uniform stays here. My boots stay here. It’s definitely more of a concern — my in-laws are older; my mom’s older. It’s not even the fact of getting it, it’s giving it to someone else. There are some guys that are showering here before they go home.”

East Hampton Town Police Chief Michael Sarlo said his officers understand the risk well, and are concerned about taking it home to their families as well. Many proactive steps have been taken, however, and by now, he said, there is as much risk of exposure as if they were going about daily routines during normal times.

Lisa Charde, the chief of the East Hampton Village Ambulance Association, said the personnel in her department have “a pretty healthy fear,” but everyone is taking proper precautions and wearing personal protective equipment to stay safe. “We are safer with our P.P.E. than we are shopping,” she said. “I feel safer on a call than I do at the I.G.A. I’ve been trained how to take care of myself and protect myself, but at the I.G.A., I don’t know.”

“Scene safety” is something that is drilled into emergency medical service providers when they take an E.M.T. class, she noted.

There are 43 volunteer members in the village ambulance association and many are older. “So right off the bat, if ­you’re over 70, we’re asking you not to go on calls where patients are showing signs of COVID-19,” Ms. Charde said. “Then there are those who have a husband who is sick, or a wife who is sick, or they take care of their mom.”

At last count, the agency had 8 volunteer drivers and 10 emergency medical technicians willing to go on those types of calls. That figure does not include a paid paramedic staff who work daily.

She is not worried — yet — about the statewide shortage in protective equipment. “I am comfortable with it right now, in the moment. Am I worried about what will happen? I am. If we got pretty crazy busy in the next week or two, we’d be okay. The thing is the unknown, is how this is going to play out.”

On Tuesday, Suffolk County implemented the state’s E.M.S. Viral Pandemic Triage Protocol, which enables emergency medical personnel to quickly differentiate among patients who may have ordinary influenza-like illness from those with more serious conditions. Those not displaying overly concerning symptoms will not be taken to a hospital. The protocol is intended to decrease the impact of unnecessarily burdening emergency medical providers and hospitals.

New Dog Agility Park, Community Garden Sale in Montauk
HarborFest Is Canceled
Few Fireworks on South Fork This Year
Easing Stress on the Environment, One Flush at a Time
END_OF_DOCUMENT_TOKEN_TO_BE_REPLACED