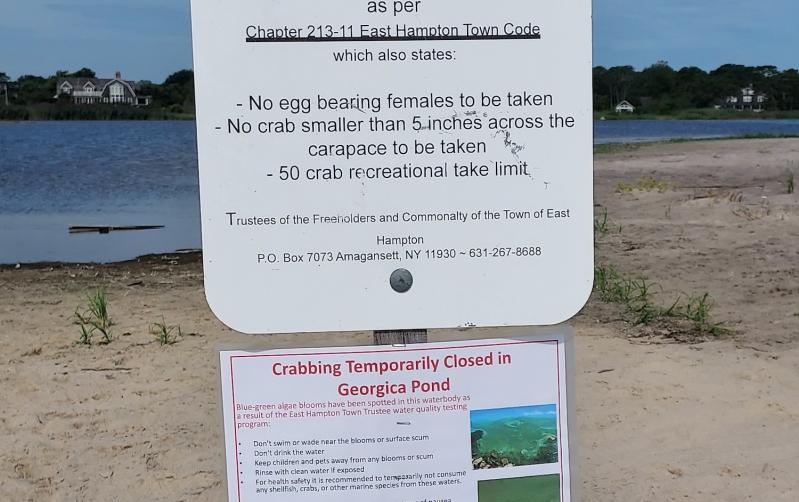 Signs warn people that Georgica Pond is closed to crabbing and the taking of other shellfish and marine life.
John Aldred
By Christopher Walsh

Illegally harvesting blue crabs is "wiping out the population of a food source," Francis Bock, the trustees' clerk, said on Tuesday, "but the health issue is bigger," he added, referring to the risk of consuming shellfish taken from waters experiencing a toxic algal bloom.

On Aug. 18 and 20, harbormasters issued summonses to five men found crabbing in the pond, which is also closed to fishing because of the blue-green algal, or cyanobacteria, bloom.

In the early hours of Aug. 18, the harbormaster Thomas Cullen observed three men crabbing in the pond, according to a police report. Jishun Wang, 51, Jibo Chi, 52, and Dao Yue Lin, 56, all of Queens, had three tubs, each half-filled with blue crabs. All three were issued appearance tickets for two violations each: for not holding a required town shellfish permit and for crabbing in violation of the temporary prohibition.

"They're taking them out by the ton," Mr. Bock said of the Queens men when the trustees briefly discussed the Aug. 18 incident at their meeting on Aug. 23. He said he suspected the crabs were "going to restaurants in the city."

"I don't think they read signs," he said of the Queens men. "Or, they just don't care."

On Aug. 20, while on patrol in the early evening, the harbormaster Vincent Forlenza spotted Darnell Walker, 35, and Tai Van Truong, 40, both of Springs, crabbing with nets in hand. The officer explained that the pond was closed and crabbing prohibited, and issued a summons to Mr. Walker for crabbing without a shellfish permit and for crabbing in closed waters. Mr. Truong, who does hold a shellfish permit, was issued a summons for crabbing in closed waters. Mr. Walker and Mr. Truong had been given a return date on Monday.

At their Aug. 23 meeting, the trustees suggested that signs informing the public of the pond's closure be posted in multiple languages.

"It's been very busy," Ed Michels, the town's chief harbormaster, said of the recent activity at the pond. "There have been a lot of out-of-town folks. . . . They've been coming and leaving with hands full of paper," he said, referring to the summonses issued, "and the crabs go back in the pond."

Mr. Michels spoke of people wearing waders, lying on the ground to evade detection when Marine Patrol officers arrive. "I'm telling you," he said, "sometimes there are a lot of people down there."

It is not a new phenomenon, Mr. Michels said, and Mr. Bock said that people without permits harvesting crabs from the pond noticeably increased last year. Regardless, Mr. Michels said, "the word is out somewhere UpIsland that the crabs are good."