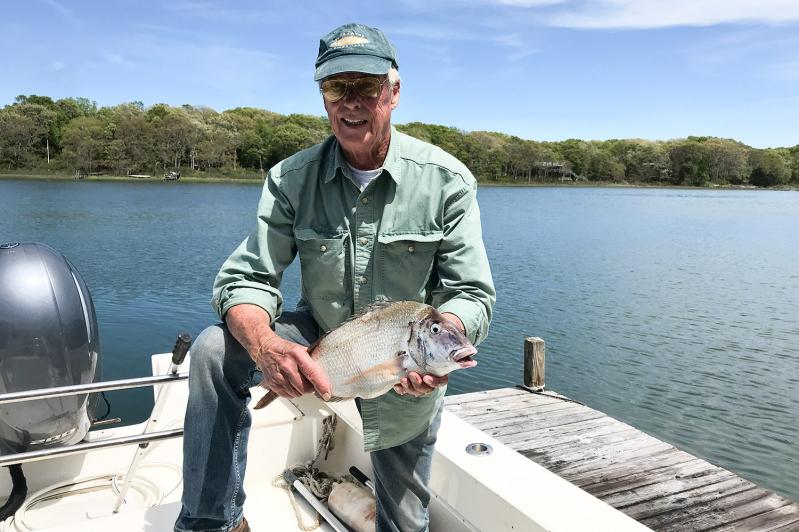 On the morning of May 27 a heavy sigh of relief was palpable along the well-worn docks of Montauk Harbor. Despite a dense blanket of fog that blended into the placid, dark water, there was a buzz and banter that had not been heard for many months.

People with rods, tackle boxes, and coolers in hand made a steady stream to their favorite party or charter boats for a day of fishing. With the sound of car doors slamming and with nary a breath of wind, the early morning stillness brought about conversations, interspersed with bursts of laughter, that could be heard across the entire harbor. It brought a warm and welcome feeling of better days of yore. Times that we easily took for granted.

For many, last week was a time to rejoice. Those boats, which had been silently tied to the dock since the pandemic broke out, were finally allowed to set sail as Long Island had officially entered phase one of reopening its economy. While many precautions and mandates remain in place, it was an early morning to celebrate. With an abundance of hand sanitizer, antibacterial wipes, and face masks, the boats were readied for eager patrons anxious to get away, at least for a few hours, for peace, relaxation, and perhaps some fish to take home.

In the days since the reopening, business has been brisk. Fishing has also been good, depending on the species, and people are happy.

“It was about time we were allowed to go back fishing,” said Capt. Mark Ryckman of the party boat Montauk Star, who saw a large turnout of anglers anxious to wet a line for fluke. “We are following all of the C.D.C. protocols and everyone who boards has been very understanding of the rules that need to be followed. People are just happy to be back on the water. Many missed that freedom.”

Capt. Michael Vegessi, the owner of the Lazybones, a half-day party boat, agreed with Ryckman’s observations. “People have had the pandemic blues,” he said. “Most everyone who comes aboard tells me that they are so happy to leave the house and be on the water. I think it’s been therapeutic for a lot of people.”

“I had no hesitation or concerns in going fishing,” said Anthony Caputo, who went for fluke on Saturday on the Simple Life, a charter boat run by Capt. Tyler Quaresimo. Caputo, a schoolteacher who hails from Miller Place, said, “It felt great and normal to be on a charter boat again. Over the past few weeks, I’ve slowly come out from the house and have become more comfortable in this new normal we are in.”

Caputo is gearing up for his next fishing outing in Rhode Island in two weeks. “I can’t wait to do it again.”

As for the fluke fishing itself, the action has been a bit slow to develop. “Fishing is no ball of fire, that’s for sure,” said Ryckman. “The waters are still chilly, but we are seeing more short fish in the catches, so it looks like it’s a harbinger of a new body of fish moving in.” Ryckman also noted that some huge sea bass have hit the deck of late, but alas, the season for the popular fish does not open until June 23.

As a side note, the Montauk Marine Basin is moving forward with its 50th annual shark tournament that’s scheduled from June 25 to 27, albeit with a few modifications. There will be no welcome dinner or awards ceremony, and the captains’ meeting will be held virtually. In addition, there will be no blue shark category and the entry fee has been reduced to $1,000.

Not to be outdone, the Montauk Surfmasters Spring Shootout tournament is also underway. Ending at the end of June, positions are up for grabs for men, women, and youth fishing in either waders or wetsuits. Brandon Sausele has taken the early lead in the men’s wetsuit division with a 17.3-pound striper.

“Other than fluke, fishing has been really good of late,” said Harvey Bennett at the Tackle Shop in Amagansett on Monday. Bennett said that striped bass can be had at just about every ocean beach from Montauk to Southampton, while porgies, blowfish, and bluefish are thick on the bay side.

“The big run of bluefish has thinned out a bit at Gerard Drive,” he said. “They are more spread out with spots to the east being better, like Napeague and out at Montauk, and the porgy action gets better every day locally. Freshwater should also not be forgotten.”

“Blowfish are around big time,” exclaimed Sebastian Gorgone at Mrs. Sam’s Bait and Tackle in East Hampton. “Three Mile Harbor has been a hot spot, but lots of local beaches have them.” The veteran tackle dealer and part-time garage band rocker also said that bluefish are still roaming around, with Cherry Harbor holding an inordinate number of the large-size, yellow-eyed choppers of late.

“Porgy fishing is also excellent, with a lot of big fish in the mix,” he said. “And there are a lot of small stripers on both the bay and ocean side for casters.”

All may not be well with the world, but fishing seems to be doing just fine.