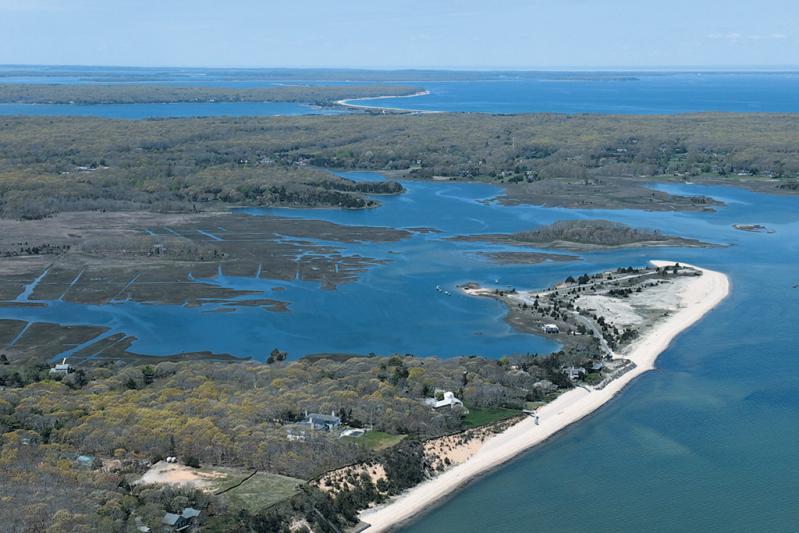 Concerned Citizens of Montauk has added Accabonac Harbor in Springs to the locations where it takes water samples weekly between May and the end of September to test for enterococcus bacteria.

Accabonac Harbor in Springs and Northwest Creek in East Hampton will receive a new degree of scrutiny after an expansion of a water testing program run by Concerned Citizens of Montauk.Concerned Citizens, in cooperation with the Eastern Long Island Chapter of the Surfrider Foundation, began the water quality monitoring in 2013, testing for enterococcus bacteria at sites mostly around Lake Montauk.Since then the number of sampling locations has grown to 30, reaching to East Hampton Village. Surfrider picks up a regular sample collection at Georgica Pond and covers sites west to Quogue.The eastern samples are processed in the Concerned Citizens Montauk office and the rest in a lab at Stony Brook Southampton. In a separate program, water taken from Fort Pond is also analyzed at Stony Brook Southampton for the presence of harmful algae blooms.The bacteria, Enterococcus faecalis, live in the guts of mammals. Finding it at elevated levels in water is an indicator of fecal contamination. Sometimes further tests suggest pets or wildlife are the source, in others human waste is the dominant source.A volunteer’s several-thousand-dollar donation for a larger incubator made the additions of Accabonac and Northwest Harbor possible, Kate Rossi-Snook, who directs the program for Concerned Citizens of Montauk, said. Requests from a number of residents had come in for the expansion, she said.A conversation with Kim Shaw, the di-rector of the Town Department of Natural Resources, led to the selection of the Accabonac sample location, Ms. Rossi-Snook said. The town has also joined with Cornell Cooperative Extension to find ways to control stormwater and groundwater contamination of the harbor. Another town project is a study of removing excess nutrients through the collection of macroalgae.Christine Ganitsch, a board member of the Accabonac Protection Commit-tee, made a commitment to take the samples in Accabonac.A C.C.O.M. staff member who lives near Northwest Harbor will collect water there. Shellfishing there reopened only recently after having been made off limits by the State Department of Environmental Conservation for many years.From May through September water is collected weekly. The initial process is simple; the sampler walks out into the water to about knee depth and sweeps up a quantity of water into a sterile plastic bag, which is sealed and rushed to the lab. The samples incubate for 24 hours before being examined under ultraviolet light to determine the presence and density of bacteria, Ms. Rossi-Snook said.With standardized practices, the results can help guide remediation priori-ties and identify areas for further study, she said.For example, at Surfside Place in Montauk, where test results are consistently in the “high” range, the town is installing a filter to catch contaminants before they spill onto the ocean beach and form a small stream draining to the ocean. The shallow stream, between two resorts, is tempting to children. “Sometimes when I collected samples there, I saw little footprints in the sand,” Ms. Rossi-Snook said.Other routinely high locations are on the west side of Lake Montauk, Pussy’s Pond in Springs, and Hook Pond in East Hampton.The most highly contaminated site in East Hampton is a stream behind the Methodist Church and Hook Mill. In results from water samples taken on Mon-day, the Surfside Place sample showed 262 “colony-forming units,” or viable cells, and the Methodist Lane site more than 24,196 units. Anything more than 104 units is considered unsafe by federal regulators.As on the Village Green near Town Pond, village officials have overseen the creation of streamlike “bioswales” planted with vegetation to slow water flow and take up nutrients. The bioswale there showed 836 units in Monday’s sample, but the pond itself only 86 units. Ms. Rossi-Snook said that there was not enough information about the recently installed bioswales to say conclusively how much they were helping.Colleen Henn, the clean water coordination for the Surfrider chapter, has been involved with the bioswales since they were in the planning stages. She is scheduled to speak about the project at the East Hampton Library as part of the Tom Twomey Series on May 18 at 6 p.m.In recent tests for the western portion of the study area, bacteria exceeding the 104 colony-forming units level were found at Havens Beach in Sag Harbor and at the foot of Long Wharf, Meschutt Beach in Hampton Bays, and at the Stony Brook University boat ramp on a Shinnecock Bay tributary.The C.C.O.M.-Surfrider data is not in and of itself a source of official results on which major public initiatives are based. What it does do, Ms. Rossi-Snook said, is direct attention to where work may be needed. Based on the study, the United States Geological Service agreed to a major effort to learn more about contamination in Lake Montauk, including identifying specific sources of pollution.Town and county rebate programs for replacing failed and outdated cesspools or septic systems in watershed areas will probably help reduce bacteria, Ms. Rossi-Snook said. New technology can remove the nitrogen in wastewater thought to be the cause of algae blooms that can choke waterways.In addition, the test results could help officials make recommendations for community preservation fund purchases. Among the recent deals have been a number of parcels around Lake Montauk, several at Fort Pond, and in East Hampton Village, a parcel on one of the Hook Pond headwaters where the existing house will be removed at the seller’s expense. “This can inform decisions,” Ms. Rossi-Snook said.All the science does not come cheap. In addition to staff members’ time and the costly hardware, supplies for a single sample cost C.C.O.M. around $10. Last year, Ms. Rossi-Snook said, more than 800 tests were done by Concerned Citizens alone.

Watching for bacteria at Accabonac Harbor and Northwest Creek