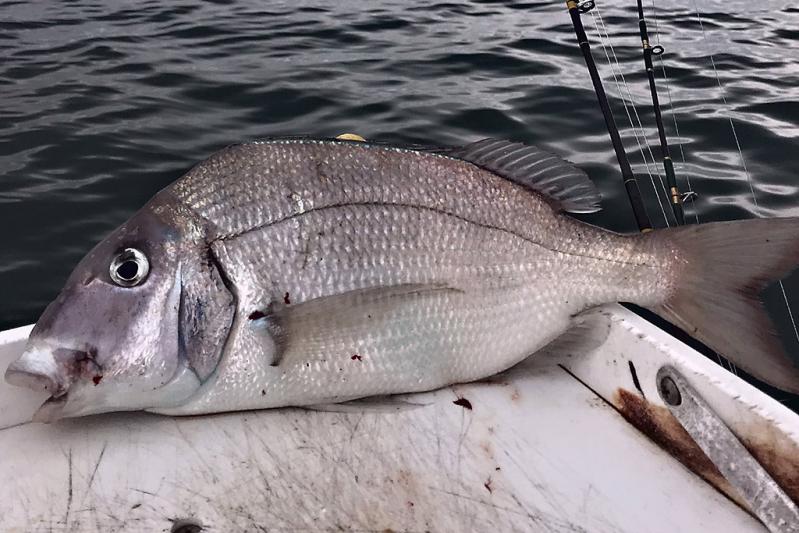 Porgy, also known as scup or sea bream, sometimes gets an unfortunate bum rap. I’m not clear why that’s the case. Most prominent are the complaints that it’s a very bony fish to eat. That’s just hogwash, plain and simple.

The skeletal structure of a porgy is no different from that of any other similar-size pan fish. Porgy and the highly regarded yet overpriced red snapper are very similar fish with perhaps some personal taste differences. Joe Realmuto, the longtime executive chef at Nick and Toni’s restaurant in East Hampton, is a huge fan of the flesh of the populous local porgy. That in itself should prompt more people to try it when offered. Realmuto knows his fish.

Its flesh, when not overcooked to oblivion, is moist, sweet, and tender. Grilling a whole porgy on a hot charcoal grill, drizzled with olive oil, lemon, sea salt, and fresh garden herbs, results in one of the finest seafood meals you could ever imagine. I have a hard time thinking of another dish I’d rather consume.

It was with this thought in mind that I went out on the morning of May 1, when the season for catching a porgy opened. Heading to the west, I did a few drifts at Jessup’s Neck first to see how thick the newly arrived striped bass population was stacked up.

Rigged with a gold two-ounce diamond jig, I got a striper with each drift on the stiff, incoming tide. Alas, all were under the 28-inch-minimum requirement. The three other boats that shared the rip with me also caught and released a number of bass. It was nice to see a good number of fish in residence. Bigger fish should be on the scene shortly in the warming waters, along with bluefish.

Heading to the southwest in my boat, I noticed a few craft on the drift and at anchor, trying their luck for porgy. Despite the gray skies and intermittent drizzle, others also seemed eager to cash in on the humble porgy.

As the winds were light, I decided to drift and quickly baited up with some fresh skimmer clams. It only took a few seconds before the telltale tug of a porgy inhaling the bait. The fight was on. A slow lift of the rod tip and a plucky, two-pound porgy flopped on the deck. It was an instant good start to the season.

I fished for only an hour, but I retained a few more of only the largest fish. Many caught that morning were small, under the nine-inch size limit, but I threw plenty of keepers back. No need to be greedy, as most of the fish are females laden with eggs and about to spawn.

For me personally, the urge for porgy was successfully scratched that day.

The season for summer flounder, also known as fluke, opened on Saturday, and from all accounts, the early results were positive.

“I have to say, it was one of the best openers I’ve seen,” said Capt. Mark Ryckman of the party boat Montauk Star. “There was a great showing of shorts that could have sunk the boat, and we had 20 keepers for the day.” Anglers are allowed to retain four flatfish over 19 inches per day.

“It was an awesome start to the fluke season,” agreed Kathy Vegessi, the shoreside support arm of the Lazy Bones, a half-day Montauk party boat. “There were tons of shorts and enough keepers in the mix. The sea conditions were perfect for drifting.” Sadly, stiff northeast winds and heavy rain deterred fishing activity on Sunday for just about any species of fish.

“A good showing of striped bass in the surf for casters,” observed Paul Apostolides of Paulie’s Tackle Shop in downtown Montauk. “It’s been a nice showing so far. It’s a good sign.”

Looking westward, over the sandy, well-weathered dunes of Napeague, Harvey Bennett, the proprietor of the Tackle Shop in Amagansett, was enthused about the influx of a variety of fish over the past week. “You name the species, and you can most probably catch it,” he smiled from behind the counter of his shop on a rainy Sunday.

“Striped bass are good along the ocean beaches and bays, with larger fish showing up. Plus, you have porgy, fluke, bluefish, squid, kingfish, and others to choose from.” Bennett said that Fort Pond Bay holds a good amount of squid and that some fluke were landed at Cartwright at the southern tip of Gardiner’s Island.

“And don’t forget that the fishing in fresh water has been excellent as well,” he proclaimed. “There has been some big walleye taken in Fort Pond. Spring has certainly sprung on the fishing scene.”

Sebastian Gorgone of Mrs. Sam’s Bait and Tackle on Three Mile Harbor Road was grinning broadly when reciting his latest fishing news. “The weather has not been great, but fishing is much better,” he said. “Bass are moving in heavy now and a good number of keepers are here. Porgy fishing was very good in the bays and the box trap guys are catching a lot of squid nearby.”

Looking for prime fluke bait? Gorgone has secured a large supply of local squid. Fluke have a distinct sweet tooth for calamari.

Looking even farther to the west, Ken Morse, the longtime owner of the Tight Lines Tackle shop in Sag Harbor, was enthused about the solid action occurring in his local waters.

“Porgy started very well and is getting better every day,” he exclaimed. “The area near Jessup’s Neck has been the hot spot and I’ve weighed a few fish that nearly tipped the scales at four pounds. Weakfish are mixed in too. As per fluke, a few were landed on Saturday, but folks had to contend with lots of sea robins interfering with their baits.”

For those seeking striped bass, you are in luck as stripers have arrived en masse. “They are just about everywhere from South Ferry to Jessup’s, with a good number of keeper bass,” added Morse. “And the action from the ocean has been good with fish up to 17 pounds landed, but it’s been strictly a night bite of late.”

Whether it’s by day or night, it’s a welcome sight to finally see an upswing in fishing on so many fronts.