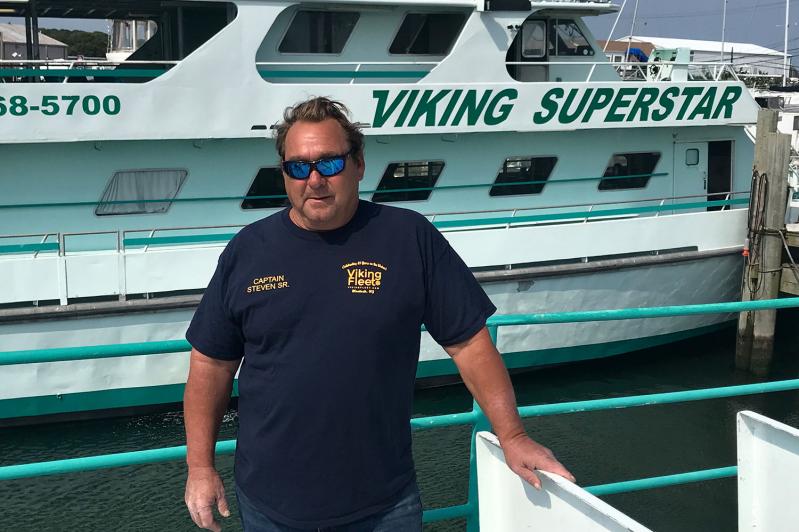 Capt. Steven Forsberg Sr. of the Viking Fleet will be honored as the Fishing Legend of the Year on Sunday at the Montauk Mercury Grand Slam tournament.
Jon M. Diat
By Jon M. Diat

"I'm not sure what I would have done if I were not a fisherman," reflected Capt. Steven Forsberg Sr. of the Viking Fleet in Montauk, the largest privately owned fishing fleet in the Northeast. "I can't see doing anything else. I think I was born with it in my blood." There's probably a good bit of salt water mixed in that blood, too.

Forsberg will be honored as the Fishing Legend of the Year on Sunday evening at the 21st annual Montauk Mercury Grand Slam fishing tournament for his many decades of involvement in the community and a lifetime of working on the water.

"The recognition is certainly nice, but I was really surprised when I was notified of the award," he said modestly while sitting on a bench alongside where the 140-foot Viking Starship was docked in Montauk Harbor last week. "I'm honored by it, but there are so many other fishermen here in this town who also deserved the recognition."

The story of the Viking Fleet began in 1936 in Freeport, when Forsberg's grandfather Carl got the business underway by taking paying fares from New York City out for a day of fishing. Codfish were the main quarry, as they were plentiful off the South Shore at that time. The family-owned business relocated to its present home in Montauk in 1951.

Today, the Viking Fleet, which is a year-round operation, consists of three party fishing boats, a high-speed ferry that does daily runs to Block Island, a commercial fishing vessel, one cruise vessel, and the Viking Fivestar, which is operated by his son Steven Jr. and is available for private charter and offshore open trips.

While Forsberg, 60, still takes the Viking Starship out for extended offshore excursions, his main responsibility these days is keeping a close eye on the daily operations from land. That includes overseeing more than 40 employees during the busy summer season. While he claims he is semiretired, it's clear that Forsberg is not about to put his fishing rod away anytime soon.

"I'm my happiest when I'm either 50 miles or 50 fathoms offshore," he admitted. "While a lot of my time is now on shore, I'd still rather be out fishing."

Forsberg credits his father, Paul, with building the business into what it is today, and with instilling in him a strong work ethic. "I started working on the boats when I was 5 years old, and since I was so small, he would also make me go into the engine room to help with repairs," he smiled. "By the age of 13, I already had my first double hernia lugging oil cans. He was very hands-on and he taught me everything about boats and fishing."

Even after decades of running his fleet of boats from the wheelhouse, Forsberg still feels the pressure to catch fish for his customers. "No matter the trip, I always want to give the best fishing experience possible for those who come aboard," he said. "Even till this day, I always feel pressure on every trip to produce fish."

"The Forsberg name in Montauk is legendary," said Henry Uihlein, the owner of Uihlein's Marina located on Montauk Harbor, where the Mercury Grand Slam tournament will be headquartered. "Steven has been a fixture in Montauk and has followed in his father's footsteps. That's not an easy thing to do. He most wholeheartedly deserves to receive this award."

As with previous award winners, the plaque Forsberg will receive on Sunday will be inscribed with the following: "In dedication for their knowledge of the sea, their love of the sport of fishing, and making Montauk the fishing capital of the world." The words perfectly capture who Forsberg is.