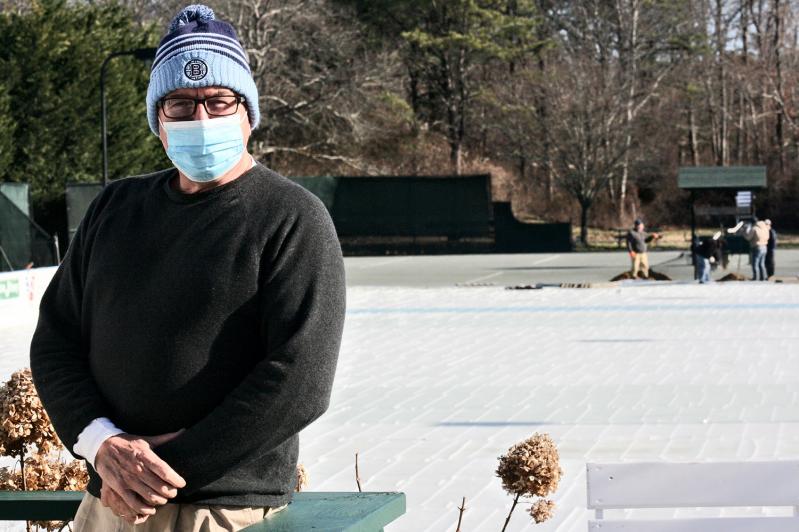 Doug De Groot was ready last weekend for the annual conversion of part of his Buckskill Tennis Club into the Buckskill Winter Club.
Jack Graves
By Jack Graves

As was the case with many tennis players here, Doug De Groot played the sport outdoors Sunday at the Buckskill Club in East Hampton that he and his wife, Kathryn, own, but as of Saturday, assuming all goes as planned, four of the club's Har-Tru courts will be under an outdoor 85-by-200-foot National Hockey League-size ice rink and open for business.

It will be the Buckskill Winter Club's 16th season, and, despite the coronavirus pandemic, De Groot is hoping for a good one.

Enumerating some of the safety-oriented changes, he said during a conversation Tuesday that there will be minimal seating in the traditionally teeming clubhouse this winter, that the clubhouse doors will be open, that skates will be put on outside, that the locker rooms will be closed, and that socially distanced figure skating instructors and their students will be masked.

The winter club's new skating director, Sarah France, an ice dance coach and choreographer since 1998 who is on the staff of the high-powered Shattuck-St. Mary's figure skating program in Faribault, Minn., and who is a choreographer and performer with the Chelsea Piers-based Ice Theatre of New York, will have Milly Wasserman, Brittni Svanberg, and Emma Dahl as her assistants.

Cory Lillie, Tim Luzadre, and Frank LoPinto, as they have in the past, are to oversee the club's youth hockey program. De Groot added that there will be two youth hockey teams using Buckskill's ice this winter -- the Buckskill Club's Sharks and the Peconic Hockey Foundation's Wildcats Pee Wee team.

These teams would practice and scrimmage, he said, "though we don't know yet if there will be any games." Schedules on buckskillwinterclub.com ought to be up soon.