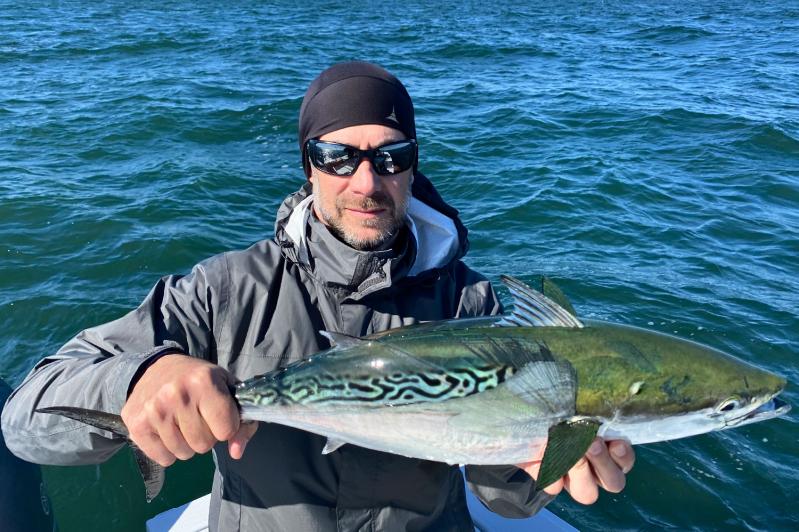 Jack Guerin landed and released this false albacore on a recent trip with Gunkholin Charters out of Montauk.
Capt. Merritt White
By Jon M. Diat

It’s been way too long since I held a fishing rod. This wasn’t intentional; there were many issues that had come up, some very unexpectedly.

For one, my aging Nova Scotia-built lobster boat was high and dry for several weeks receiving some much needed and expensive repairs. Also, there were various doctor and dental visits to attend to, including a trip to the emergency room in Southampton, to deal with a painful kidney stone. Such minuscule grains of calcium oxalate (nasty hard matter in layman’s terms), bring forth a level of pain that extends well beyond the scale of zero to 10. To top it off, the weather of late has also been exceedingly windy, making any thoughts of fishing an afterthought. Frustrating on many levels.

But Saturday’s marine forecast looked promising for a change. The bushel of green crabs that I bought two weeks ago would finally be put to good use for a few hours of blackfishing in and around the Plum Island area. The reports, however, told of a plethora of small fish in many East End waters, with very few keepers finding their way to the dinner table.

Departure time would be 6:30 a.m., and my two companions that morning were already aboard when I showed up at the dock. The diesel engine too was warmed up. My guests seemed even more anxious than me to go fishing.

The hourlong ride to Plum was pleasant going into a slight chop from a northerly breeze that hovered around 10 knots. Sipping cups of coffee, making small talk and catching up on the latest rumors and gossip around town made the trip feel much shorter in the heated cabin.

As we approached the government-owned island, I was happy to see there were no other boats in sight, as most of the craft we saw continued motoring east in the direction of Gull and Fishers Islands, or to the north side of Plum, where an armada of boats was anchored up, side by side.

After dropping the anchor on one of my favorite rock piles in 20 feet of water, we lowered our baited hooks. It did not take more than a few minutes before the first blackfish was landed, a fish no bigger than six inches.

Over the next 90 minutes, the action was sporadic, with nary a fish approaching the minimum 16-inch size limit. The dour reports I heard were seemingly correct. The fish were also biting lightly and just didn’t seem hungry. It was clear that despite being on prime real estate, it was prudent to move to another location.

Looking at my GPS, I focused on a spot 100 yards to the east, where my lobster traps had always been productive. The rocky peak was in about 22 feet of water and the fish finder showed that there was some life near the bottom. A good sign.

With the anchor set, we once again dropped down our baits. It took a few minutes for the first bite, but the action came on strong as a solid mixture of keepers and throwbacks were landed until the tide slacked off around noon. The bite was intense at times and the fish attacked the crab baits with reckless abandon.

“That was some great fishing,” said one of my companions as we stowed our rods. “It was amazing to see how much better the fishing was on that last spot, even though we were not far from where we started.”

On Sunday morning, I stopped by Tight Lines Tackle in Sag Harbor to pick up another bushel of green crabs from Ken Morse, the owner of the shop. He commended me on my success and said he had gotten many good reports from Saturday aside from mine.

Morse said that the fall migration of striped bass along the ocean beaches has begun, but he still characterized the fishing as “off and on.” Montauk had some good shots of bass, especially at night and just before sunrise. “Some big fish were landed too,” he added.

Like calamari? Then you are in luck, as a strong run of squid has turned up in Fort Pond Bay and in Three Mile Harbor. “People have been buying squid jigs like crazy,” said Sebastian Gorgone at Mrs. Sam’s Bait and Tackle in East Hampton. “Get down to the docks while they’re here.”

Gorgone agreed that fishing for blackfish has been frustrating for many. “I’ve had guys go out and catch 50 or 60 blackfish and get only one keeper, if that. Gorgone added that the local ocean beach fishing has been rather lackluster, but that the bass fishing has been very good for both boaters and casters out at Montauk. “Surfcasters have had their best luck while fishing at night. Also, the action on false albacore has been good out there too.”

“Squid is the word,” said Harvey Bennett at the Tackle Shop in Amagansett. “It’s a really nice run of them.” Bennett said that surfcasters have had periodic success with striped bass along the sand beaches of Amagansett, while schools of false albacore have kept light-tackle anglers content in Block Island Sound and near Montauk. Bennett continues to run his end-of-business sale at his shop on Montauk Highway.

“There’s been some decent bass fishing, especially on the north side,” said Paul Apostolides of Paulie’s Tackle Shop in downtown Montauk. “The outgoing tide is still the best and there have been a few daytime blitzes, but the nighttime has seen bigger fish.” Apostolides added that boaters are scoring well on bass and false albacore in the rips in and near the Lighthouse.

“The weather has been a real struggle out here,” said Capt. Merritt White of Gunkholin Charters, a light-tackle guide. “But the fishing for bass and albies has taken a noticeable uptick since just before the Columbus Day weekend.”