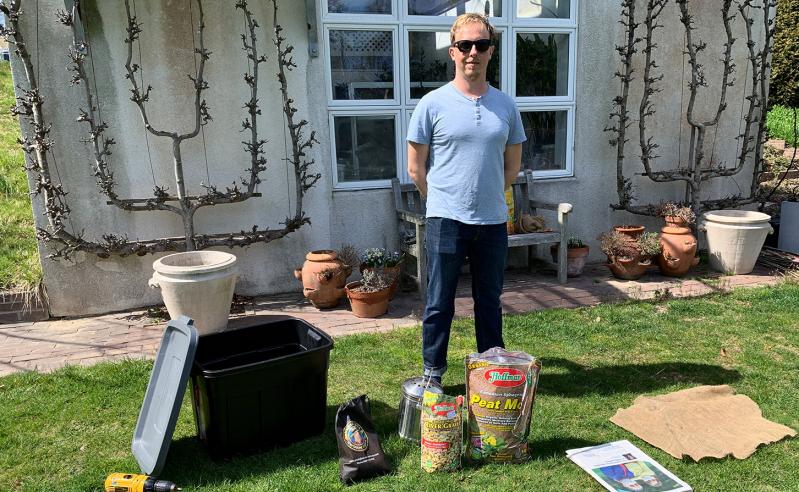 Scott Bluedorn is an artist and activist living in Sag Harbor. He is also an aficionado of vermiculture — a contained composting system in which earthworms break down food scraps to quickly create a mineral-rich soil amendment. Mr. Bluedorn explains that it’s easy to do at home with a plastic bin, some readily available ingredients, and red wiggler worms.

Were you an earthworm-digging kid?

I wouldn’t say I was earthworm-obsessed; I was more into ant farms. It was cool to see their burrows and the way they lived. When I mixed the ant farm ants with wild ones, I found they didn’t get along — it was quite a battle. Worms tunnel the way ants do. You can’t totally see it in a worm bin, but you can get a bird’s-eye view of what they do and how they live.

How did you discover your interest in vermiculture?

About 10 years ago, I was just getting into gardening and was looking for a faster way to compost. With vermiculture, you can turn compost into soil in as little as two weeks. Conventional composting takes longer — several months or up to a year. I still have my original setup and what’s cool about that is that I have descendants of the first generation.

What do you need to set up a worm bin?

It’s an easy setup: essentially a plastic bin with drainage and ventilation holes. A 20-gallon pail can work, as well as professional vermiculture models. Red wiggler worms that I use are smaller than common earthworms. They’re ravenous, which helps convert compost to soil faster. European night crawlers — the kind used for fishing — are the other worm typically used in vermiculture. Worms don’t like too acidic an environment, so too many citrus peels aren’t great. Coffee grounds are perfect with other, less acidic food scraps — they’re already partly broken down and the caffeine provides a boost of energy for the worms.

What do you tell people who think worms are gross?

Worms aren’t for everyone. It’s a common misconception that worms are smelly. If a worm bin smells, it indicates an imbalance: too much moisture or maybe someone added meat or oily food that the worms won’t eat. A working worm farm will smell like good, healthy soil. Healthy soil helps retain moisture for plant health. It will also provide nitrogen, minerals, and microbes. Healthy soil is like a healthy gut; it needs good microbes to stay balanced. Kids are especially fascinated by worms. Some adults think worms are odd, but they’re not gardeners. Gardeners get it on a certain level because they appreciate the healthier soil. Vermiculture is not very involved; you don’t have to do anything but feed the worms. Removing the castings can be a process, but you can buy worm farms that have graduated bins, so the soil filters to the bottom.

What’s the most interesting thing you’ve noticed since keeping worms?

I’m surprised by how resilient worms are. I’ll go away for two weeks and the colony adjusts food-wise. They’ll go dormant and eat less to adjust to conditions. Plants really love the worm castings. Tomatoes especially benefit, but all plants show healthier foliage and growth. You can make a worm tea with castings and water as a sort of liquid fertilizer for plants. It’s just the best.

How much food waste do you think you’ve composted instead of adding to a landfill?

That’s the other great part about it — you can avoid food waste at the same time. It’s probably about 100 pounds per year, and so half a ton of food waste diverted from a landfill, so far, in 10 years. All my vegetable scraps go into the worm bin. Food waste in a landfill creates methane, because that’s how rotting food breaks down if it’s not eaten by worms. So this sequestration is a great way to reduce both methane released into the atmosphere as well as space in a landfill.

You’re a talented artist — have you drawn worms?

Actually, my most recent painting depicts animals morphing into each other, to represent how everything in nature is connected in a complex network. Worms are a keystone species, not only contributing to soil health, but they’re also food for other animals, including birds and small mammals.