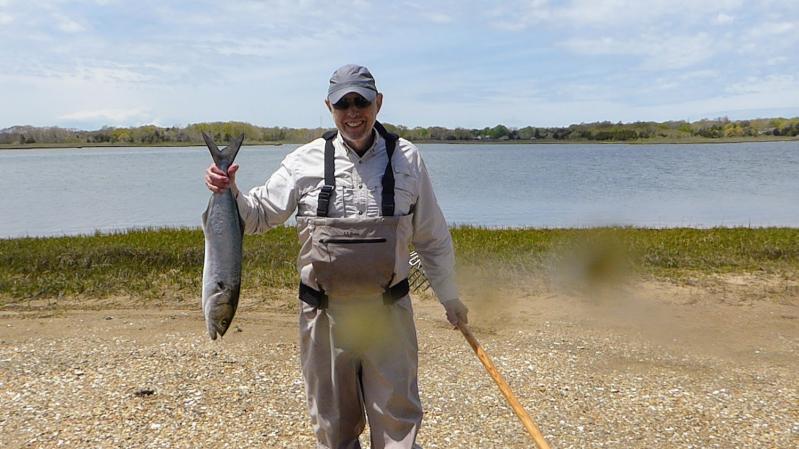 Bluefish have shown up in large quantities, as illustrated by this fish landed by Frank Riina in Accabonac Harbor.
Noreen Bradley
By Jon M. Diat

I was a little concerned. The three-day Memorial Day weekend northeaster that brought about rough seas and winds up to 40 miles per hour was nasty on many fronts.

Unfortunately, the storm imperiled 10 people bobbing about in two inflatable rafts in three-foot seas on the west side of Shelter Island (wrongly, nobody wore life vests), as well two kite boarders who needed to be rescued during the maelstrom off Gerard Drive in East Hampton. Thankfully, no lives were lost.

On a much less serious note, the gale also probably displaced my lobster traps, which were exposed to the rough seas. After the passing of the storm two days later, I finally got out to check on them. While I did lose one trap, the others were recovered but not exactly where I had placed them the week before.

In fact, the tide and wind pulled one of them nearly a quarter-mile from its original position. Another one was wedged solidly into the rocks 30 feet below, which meant I had to tie the rope of the trap to my stern cleat to extrude it while under power.

Unfortunately, it was also loaded with about 75 pounds of sand, seaweed, rocks, and other debris. Hauling it hand over hand was a chore I'd rather forget, but it also illustrated just how strong that northeaster was to churn the bottom at such a depth. Mother Nature suffers no fools.

As for fishing, the recent stretch of warm weather brought about good catches of a number of different fish in a wide variety of locales. It feels like summer is almost here.

"Oh, man, it's really getting warm now and the fishing is good," said Sebastian Gorgone at Mrs. Sam's Bait and Tackle in East Hampton. "Weakfish and porgies are being very cooperative, and small bass continue to run along the ocean shoreline."

Gorgone is still hearing sour reports on fluke, but has noticed an uptick in the number of blue-claw crabs in the various inner coves and harbors. I can personally attest to this fact, as I recovered 10 jumbo-size ones in my trap on Monday morning. Crab cakes, here we come.

"Plenty of porgies around and the bluefish continue to be had off of Gerard Drive," reports Harvey Bennett at the Tackle Shop in Amagansett. "Bigger bluefish are off to the east near Montauk and Gin Beach." Bennett was also happy to see that the action on schoolie-size striped bass along the oceanfront continues to please anglers utilizing small diamond jigs adorned with a teaser above. "The only thing disappointing has been fluke. For some reason, the fishing has been poor so far this season."

While fishing for bluefish and striped bass remains solid out in Montauk, fluke fishing has struggled there too since the season opened in early May. That is until Sunday, when the fishing finally came to life, with excellent catches reported by a number of open boats, including the Montauk Star, Miss Montauk II (where an 11.8-pound doormat was landed), Ebb Tide II, and the Lazybones. A huge sigh of relief could be heard up and down the docks at the end of the day.

"Finally, we had some major action on Sunday," said Capt. Michael Vegessi of the Bones. "Fingers crossed that this is a good indication of better days ahead."

Over at the Viking Dock on Montauk Harbor, Capt. Steven Forsberg Sr. returned on the Viking Starship last weekend from a three-day excursion far off to the east, where various denizens of the deep were on the menu. The veteran captain, who will be honored as the Fishing Legend of the Year at the Montauk Mercury Grand Slam fishing tournament in July, reported "a tremendous offshore trip."

Knowing that bad weather was coming at the end of the excursion, the skipper took a long ride to the far and deep to get into some solid action right off the bat. It was a wise move, as the anglers aboard caught a variety of fish, including tilefish, pollack, hake, and cusk. After the brisk start and with coolers beginning to fill up, Forsberg decided to check out some new grounds, where barrelfish, hake, and wreckfish, were brought to gaff, as was a gigantic silver eel that was over six feet long.

"You could have put a football in its mouth and not even noticed," the captain said of the serpent-like monster that was landed by George Spath. On all accounts, it was a banner first day before the weather moved in.

Dennis Leahy landed the largest tilefish on the trip, which tipped the scales at an even 43 pounds, while Paul Ryan's wreckfish came in at 34 pounds. No doubt that plenty of sore arms came ashore. More such trips are scheduled on the Viking calendar.

On a sad note, Montauk lost one of its finest skippers. Capt. Bill Urvalek died on Saturday. I had the pleasure of fishing with him many times on one of the Viking open boats he operated before he owned the Karen Sue, a stout 41-foot Hatteras charter boat that hailed out of the Montauk Marine Basin.

Quick with a smile and known for his great sense of humor, he also loved golf at Montauk Downs and playing cards with his friends. Urvalek was blessed with an uncanny sixth sense for searching down a wide variety of fish in East End waters. May you always have fair winds and following seas, Captain.