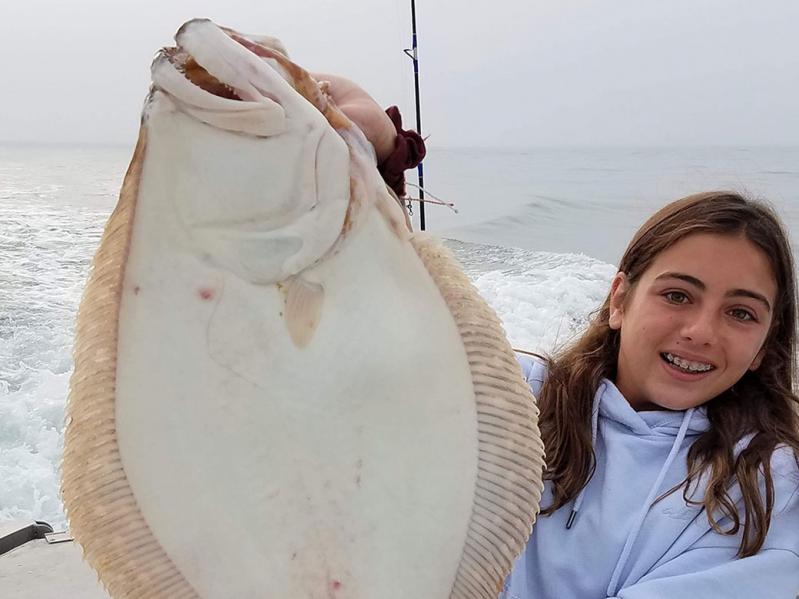 Emily Bruno of Montauk is the new leader in the Montauk Youth Fluke Tournament with her 10.88-pound fish.
Capt. Paul Bruno
By Jon M. Diat

As I started to type this column last week at my kitchen counter, I could not help being sidetracked by the gleaming white hull of the megayacht over my right shoulder. It was very distracting.

Named the MadSummer, the mammoth steel ship was at anchor in front of our house on the Shelter Island Sound, enjoying the last few precious days of exactly that -- summer. It was impossible to miss in the day or when illuminated at night against the serene backdrop of the Mashomack Preserve on Shelter Island.

Coming in at a mammoth 320 feet, the ship was launched only last year and can comfortably accommodate 12 guests and a crew of 30. Not a bad ratio of service. Miss the boat after it departs the dock? No problem, as it comes equipped with a helicopter pad on the bow deck. A movie theater, 12-meter pool, and a fleet of boats, Jet Skis, and other toys are standard.

Best of all, you can actually rent it. But you may need a few credit cards as it will set you back about $1.5 million a week, plus expenses. A good credit score is also helpful when filling up the 75,000-gallon fuel tank. Rumors that BeyoncŽ and Jay-Z were its occupants when it was here three weeks ago were making the rounds dockside in Sag Harbor. My invitation to join them must have been lost in the mail.

As I was coming off the court the other day, one of my tennis buddies quipped that the yacht was double the size of the ship he sailed on when he served in the Navy. “It’s unbelievable to see something that big,” he said, noting that a World War II Navy destroyer was about the same size as the MadSummer. “These yachts keep getting bigger and more outlandish every year.”

It’s hard to disagree. At times, the local waters this summer looked more like Cannes or Monte Carlo, with yachts that are seemingly larger than ever and more elaborate. David Geffen’s ship, which anchored up in Gardiner’s Bay back in July, was 450 feet long.

About 25 years ago, we used to gawk when a ship around 100 feet would pass by. Now we give nary a glance. Alas, the MadSummer weighed anchor a few days ago and plotted a course to the warmer waters of the Caribbean, where she will no doubt turn some heads too. That is, until the next larger yacht comes into view.

Addressing the theory that bigger is better, Emily Bruno of Montauk would certainly attest to that fact, as she landed a whopper of a fluke weighing in at 10.88 pounds on Sept. 8. Fishing on her father’s charter boat, Elizabeth II, the 13-year-old with a never-ending smile is the new leader in the Montauk Youth Fluke Tournament. If her name sounds familiar, it’s because she won the event last year. Step aside, this young lady is a real sharpie.

“Emily made me stay out even though her sister, Katie, and myself wanted to go home,” recalled her father, Capt. Paul Bruno. “She was the only one left fishing. She said she wanted a big fluke and she got it. I give her all the credit in the world. If she didn’t make me stay, she would never have caught that beauty.” Note that the season for fluke closes at the end of September.

Besides the continued nice catches of sea bass, porgies, and striped bass, fishing for false albacore has moved into gear from Gardiner’s Island all the way to the south side of Montauk. Also known as little tunny, the speedsters of the tuna family are a popular catch-and-release gamefish for fly and light-tackle aficionados. With a plethora of bait in our local waters, many feel that the fishing over the next month should be excellent.

“There are albies roaming around, but it’s been best out near Montauk,” observed Harvey Bennett at the Tackle Shop in Amagansett. “The run has just started and it should get even better over the next few weeks as the waters start to cool down.”

Bennett was also excited about the porgy and sea bass fishing, which remains strong, while snappers are keeping both adults and kids happy dockside. “The snappers are getting larger every day,” he said. “Plus, there are still blowfish and kingfish around, and there are plenty of small stripers in the surf for casters, too.”

“There’s a lot of life around for sure,” said Sebastian Gorgone at Mrs. Sam’s Bait and Tackle in East Hampton. “The snapper fishing has been off the charts as have the blue-claw crabs. It’s the best season I’ve seen for crabs in a very long time.”

Gorgone added that blowfish and porgies remain in good supply, while some large kingfish were landed from the ocean beaches. “It’s still summer by the calendar, but the fall is shaping up to be really good from all signs.”