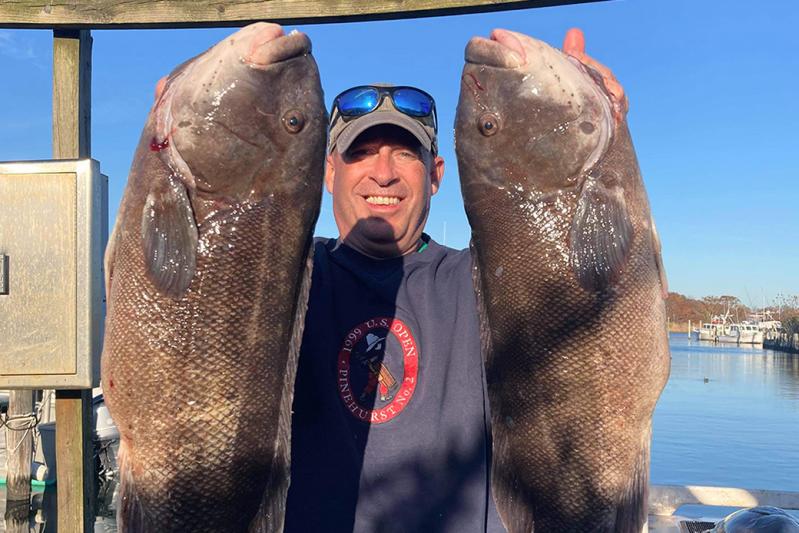 John Kedman landed this brace of large blackfish on a recent trip with Chancey Charters out of Montauk.
Capt. Hugh Chancey
By Jon M. Diat

By the time this column is published, my boat — a 30-foot Nova Scotia-built craft — will likely be out of the water, encased tightly in white plastic shrink wrap, mummified for its winter-long slumber. She deserved some rest.

It was an unusual season on the water by all accounts. When the boat was first launched in mid-March, the pandemic was already beginning to have a firm grip on New York and Long Island. It was a scary and uncertain time. In many ways, it still is.

Looking back, I was fortunate that my boat entered the water early, as marinas were mandated to close down only a few days after it went in. As a result, many boaters remained high and dry until the restrictions were eased a few weeks later. But while I was thankful to be tied up to my slip, I had other questions and concerns.

Was fishing safe in the company of others? I was low on diesel fuel. When would the gas dock reopen? With my local tackle shop closed, where could I buy bait and marine supplies? On terra firma, the list of concerns was much longer and obviously more pressing.

Our lives have changed dramatically, possibly forever in some cases. In many ways, despite the recent positive news that a vaccine is on the way, it's still going to be a long time before we return to any sense of normalcy. Last week, we even put up our Christmas tree in a much-needed effort to bring a little extra cheer and hope into the household. I wouldn't be surprised if it remains up for several months.

Saturday also was the last fishing trip on my boat. I was a bit on the fence about whether to go. I did a thorough cleaning of the craft a few days earlier and wondered if it made sense to get it dirty again. Plus, the winds have been howling into the night the past two weeks and I was concerned that the seas could be a bit more nautical than I'd like that day. But with the sun shining brilliantly in the east, off we went.

We anchored up on the north side of the Race Rock Lighthouse at the entrance to Long Island Sound. The blackfish were hungry. We retained our limit of keepers and threw back dozens upon dozens of undersize fish. The bite was strong on both tides of the 56-degree water, and it was rare to go more than 30 seconds without a bite. Smiles abounded aboard. It was a nice way to finish up the season in what turned out to be calm seas within the maelstrom of the pandemic.

The long ride back to port was quiet and serene as flocks of scoters and gannets flew about. While we did not observe any humpback whales on the feed, the slick calm waters and darkening sky to the west made all of us aboard appreciate how fortunate we were to take in the surroundings. It was peace in its simplest form, a time to appreciate what we still have in these trying times.

With the Thanksgiving holiday upon us, I am reminded of what John F. Kennedy once said, that "we must find time to stop and thank the people who make a difference in our lives." I have many to express my gratitude to, including a multitude who I don't even know, especially first responders and essential services personnel. There are many more, too.

The year 2020 is one that most of us would like to forget, but at Thanksgiving we can still pause to appreciate what we do have. In these darker times, being thankful has never felt better.

On the local fishing scene, Montauk continues to offer excellent mixed-bag fishing with sea bass and blackfish headlining the list. Cod and porgies are also making their way into the bucket, along with a few bluefish. Not to be outdone, striped bass are still around. While most are small, a few slot-size keepers are out there.

"Stripers are still being caught off the beach," said Harvey Bennett at the Tackle Shop in Amagansett, who was unsuccessful on Saturday, the opening day of turkey season, in securing his holiday dinner (note that the season closes on Dec. 4). Bennett will try again this week to bag his bird.

As a reminder, all the items in Bennett's shop are on sale this holiday season. He will be open starting on Friday.

"There are still some small bass off the ocean beaches, but reports in general have been few and far between," said Ken Morse at Tight Lines Tackle in Sag Harbor. Starting on Saturday, Morse will once again commence his annual holiday sale. Among the many deals: $100 gift certificates going for $80. In December, Morse will be open Thursday through Monday.

"It's been a long and busy season and I'm pretty beat up," he said. "Still, I look forward to saying thanks at Thanksgiving."