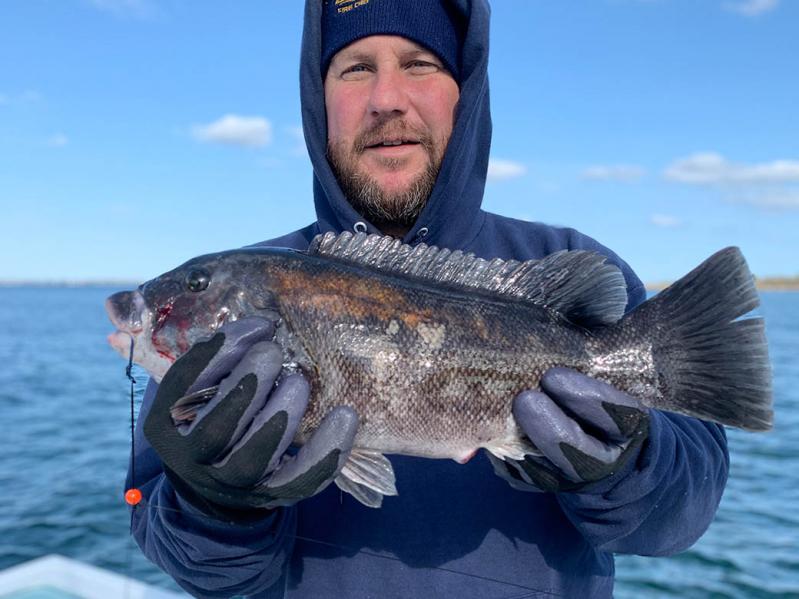 Blackfish catches have been strong this fall, as illustrated by this large one caught by James Acquista while on the charter boat Trophy Hunter.
Capt. Michael Larson
By Jon M. Diat

After about an hour steaming off in my boat to the northeast on Gardiner's Bay, the fish finder machine in my cabin painted a perfect picture of the bottom I was looking for. With the anchor set on the incoming tide, I was positioned on top of a tight cluster of broken rubble and small boulders in about 40 feet of water. It looked fishy.

To borrow a well-worn real estate phrase, when seeking blackfish, it's all about location. A matter of being even just a few feet off prime real estate can be the difference between looking at an empty bucket or arms weary from catching fish. We were on Constellation reef, a rocky plateau in Block Island Sound, about a mile south of Great Gull Island. It was Friday morning and we had the spot to ourselves.

"That's some real good-looking bottom," one of my companions nodded as he looked at the color screen. "Let's see if anybody is home."

The water temperature gauge said it was 60 degrees, almost the same as the air temperature. Balmy by both standards given the time of year. With the warming morning sun, a simple light sweatshirt was all that was needed for comfort on the stern deck. The rubber gloves, heavy boots, and rainproof outerwear would thankfully remain unused in the forward cabin.

After rigging up a two-hook rig with a six-ounce sinker, I cut a few green crabs — the bait of choice — in half. With our lines now in the water, the wait was on. And on, and. . . .

Despite the alleged good real estate below, there were no tenants in residence. I'm not sure where the eviction notice came from, but it was clear that the blackfish had moved out. Or at least relocated to another part of the plateau.

Anchors aweigh, we continued on to the east. Valiant Rock, located in the Race, a turbulent stretch of water where currents can exceed five knots, was our next spot. With a slackening tide, positioning on a good piece of bottom was easy. And the fish cooperated, but a majority were on the small side (blackfish must be at least 16 inches in length to be retained). We had a few keepers in the boat, but we felt the need to find some larger fish.

About 20 minutes later, some old numbers in my logbook came to good use as we settled on some property that had produced in the past off the northwest corner of Fishers Island. Once settled on our anchor, like a knock on the door, the blackfish greeted us with a strong desire for our green crabs. We had finally found the right neighborhood. The bite was on.

The action for the next two hours was consistent, with several fish in the four-to-six-pound range landed. The bites were frequent and the fish bit through both tides. By 1 p.m., it was time to call it quits. We left the fish biting.

We tried the same spot again on Saturday, but the action was not nearly as intense, as more boats appeared on the weekend scene. Still, it was another productive day in the unusually warm November sun. Even if the fish did not cooperate, the day was a winner by any standard.

Ken Morse at Tight Lines Tackle in Sag Harbor also confirmed the solid blackfish action that is presently occurring. "The fishing has been excellent from Plum Island all the way to Fishers Island," he said. "The weather has been great and folks are taking advantage because you know it can't last forever."

Morse was also enthused about the continuing solid run of striped bass on the ocean beaches. "The fishing during the day and at night has been exceptional. There have been fish up to 30 pounds taken of late." Morse suggests small diamond jigs when the sun is up, while plugs have been best for the nocturnal crowd.

"Bass and blackfish have been outstanding," agreed Harvey Bennett at the Tackle Shop in Amagansett. "The action on blackfish is the best it's been in many years. As for stripers, the ocean beaches, especially Napeague, have been hot. But there are also schools of them on the bay side off Barnes Landing and other areas."

Bennett also noted the massive amount of bunker that now populate Gardiner's Bay. "I've never seen so much in my life," he said. "The bay is just loaded with them. The warm waters have kept them around longer it seems."

The action at Montauk hasn't missed a beat either. Blackfish catches remain strong when anchored on the right rocks (again, it's all about location), with large sea bass and porgies close behind. A few cod are also around. The wonderful weekend weather brought out crowds of anglers as the Viking Fleet had all four of its boats sold out, and the catches were excellent for all species targeted. The smiles of those disembarking were very noticeable.

As for striped bass, large schools of small stripers, with a few keepers mixed in with some bluefish, continue to make their presence known on both the north and south side of Montauk. Let the good times roll.