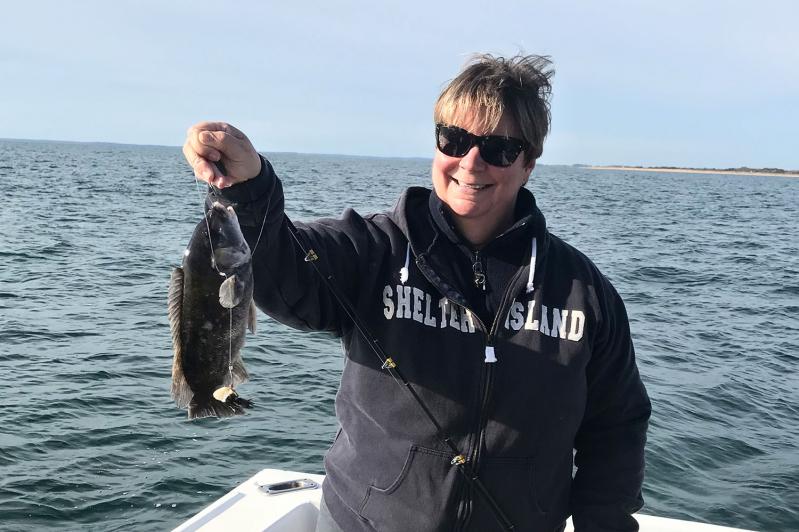 But if blackfish were the only fish in the sea, then all bets are off. Blackfish, also known as tautog, are perhaps the most challenging of fish to catch in our local waters. I know a few good fishermen who are not ashamed to admit that they have never mastered the knack of catching the elusive, bait-stealing fish. Blackfish have humbled many who brandish a rod and reel, and always will.

"No doubt, blackfish certainly provide a great challenge," said Harvey Bennett at the Tackle Shop in Amagansett. Bennett, who has been in business for four decades, has seen many an angler over the years return to his establishment with tales of frustration and empty buckets.

"First off, you need to be anchored on good, rocky bottom," he said. "A matter of a foot or two is huge. Plus, you just can't strike back on your rod on the first bite or nibble. You need to wait after the first few light bites for that larger tug on the line. Patience is a virtue, especially when it comes to catching blackfish."

Alas, heeding Bennett's words, it was time to test my own patience on Sunday morning for my first blackfish excursion of the season. At first light, the dock lines on my boat were thrown and a beautiful sunrise on the placid waters of Shelter Island Sound was before us as we headed northeast toward Plum Island.

However, as we neared the island, the winds unexpectedly picked up, making the ride lumpy and increasingly wet from the spray bouncing off the starboard bow. The marine forecast of light southeast winds was clearly in error, as gusts over 20 knots made for a challenge in setting the anchor over some prime real estate. I normally am a staunch defender of those who predict the weather, but Sunday's forecast will not go down as one of their finest efforts.

A few small fish were boated in our first spot, but the building seas made the decision to try the north side of Plum, in the lee of the wind, an easy one. A 15-minute ride was next.

Rounding past the Plum Island lighthouse on the west side, we were immediately greeted by an armada of boats of all sizes anchored up on the brisk incoming tide. Clearly, lots of people had the same idea we did.

"Wow, it looks like a jam-up on the Long Island Expressway," said one of my guests. "I can't count how many there are."

Navigating through the first parking lot of boats on anchor showed that many were on good pieces of bottom. Anchoring up to get near some good terrain would be a difficult challenge. While some have no qualms, I've never been one to mug another boat to catch a fish. Besides, bumping into another craft or getting an anchor line crossed over your neighbor's is just poor etiquette at its highest and lousy seamanship at a minimum. I decided to continue north along the boulder-strewn shoreline to find our own little piece of bottom away from the crowds and drama.

About 20 minutes later, we finally anchored up and dropped our green crab baits into the 35 feet of water where a decent amount of rocks and rubble appeared on the fish finder. The tide was still ripping and some of us reverted to 10 ounces of lead in order to stay on the bottom. The bites, however, were few and far between.

After about 30 minutes, the action increased noticeably as the tide finally began to yield a bit. Lots of small blackfish found their way to our baited hooks, but an occasional keeper would hit the deck (blackfish need to be over 16 inches to be retained). The action continued to pick up and it was rare to go more than a minute without landing a fish or losing a bait from a failed hook set. It was good action by any standard. By noon, we called it quits for the long, wet ride back to the dock.

Our group of four ended up with six keeper-size fish. Not exactly an excellent haul, but not bad either given the conditions. Unfortunately, I seemed to be fishing where the nursery school was located, as I was unable to land a fish over the minimum size limit, much to the amusement of those who shared my deck that morning.

Back at the dock, I thought of the Chinese proverb as my guests offered me a fish to take home for dinner. Thanking them for the offer, I politely declined their generous gesture. I still had some fresh swordfish in the fridge that we had bought the previous day from our local fish market. The ancient proverb was probably written before such stores existed.

Besides blackfish, anglers, especially those who fish out of Montauk, continue to enjoy what has shaped up to be an excellent run of striped bass this fall. Mixed in with the stripers are some bluefish, while light-tackle anglers continue to chase schools of false albacore with abandon and great success. Sea bass and porgies too are also putting on the feed bag as they prepare for their migration offshore for the winter. The fall run is on.