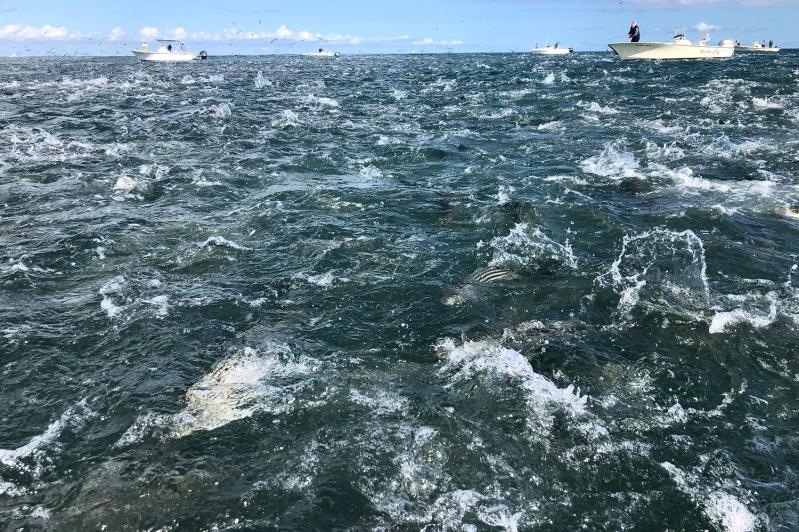 Schools of striped bass have been feasting on small baitfish off Montauk as they prepare for their fall migration.
Edward Shugrue III
By Jon M. Diat

"When the winds allow us to get out, the fishing has been like the old times," observed Capt. Michael Vegessi, the longtime owner of the Lazybones, a Montauk party boat. Vegessi was specifically addressing the influx of migrating striped bass mixed in with bluefish and false albacore that has brought back pleasurable memories of the productive fall run of years past.

"It's insane action at times, with fish of different sizes blitzing on a large amount of small bait," added Vegessi, who has operated the Bones for nearly 40 years and has seen it all. "I hope this run lasts."

Alas, that's the question on the minds of many. For whatever reason, the fall run of stripers for the past five years or so, which would start well in September, inexplicably would fall apart by the time the Columbus Day weekend came around. It has baffled many.

The abrupt drop in action was as if someone had installed an underwater detour sign for fish anchored just east of the Montauk Lighthouse. And without hesitation, the fish seemingly paid heed to the signage, much to the chagrin of party and charter boat operators, surfcasters, tackle shops, as well as those who own motels, restaurants, and marinas, to name a few. Sadly, the fall run fell flat.

Today, however, those standing dockside optimistically have their fingers crossed that the bass bite will last through November or even December, when the season formally closes on the 15th.

"The fishing off the ocean beaches for striped bass of all sizes has been exceptional," agreed Ken Morse, the proprietor of Tight Lines Tackle in Sag Harbor. "Everywhere from Southampton to Montauk has seen good fishing on small diamond jigs and a variety of plugs. I just hope the fishing lasts longer than it has the past few years. Right now, the signs look good, but time will tell."

While the ocean beaches were too tough to fish on Saturday in the stiff 40-mile-per-hour southwest gusts, those who cast a line and lure in the lee of the windswept sand dunes on the north side of Montauk and Shagwong were rewarded with solid action.

"It's been very good on the ocean or on the bay side, so the weather has not really stopped people from fishing and catching," said Harvey Bennett, the owner of the Tackle Shop in Amagansett. Much like Vegessi, Bennett is cautiously optimistic that the current run of fish will last well into the fall.

"That's the challenge with fishing," he said. "It's totally unpredictable at times. For the past few years, the fall run ended prematurely. But this string of short seasons can't go on forever. Perhaps this fall it will change to times like we experienced in the past. It has happened before, and no doubt it will happen again. Things change all the time."

Bennett added that false albacore and large bluefish can be found on the east side of Gardiner's Island roaming throughout Block Island Sound, and that porgies and snappers can still be had at the Navy dock in Montauk, where some squid have also shown up at night.

"Good bass fishing for sure," said Sebastian Gorgone of Mrs. Sam's Bait and Tackle in East Hampton. "Diamond jigs were the hot lure, but now stripers are taking bucktails and poppers. For those that like to sling live eels, they too are working well."

Over at Paulie's Tackle in downtown Montauk, Nick Apostolides commented that the bass fishing from the shore has "been pretty much gangbusters on the north side of the Point, as well as the south side, when conditions allow." Apostolides added that the bite has been solid during the day or night, with fish ranging from schoolies up to 20 pounds.

The Montauk Surfmasters Fall Classic is underway, and Brandon Sausele has taken over the lead in the adult wetsuit division with a 27-pound striped bass. Sausele, who is one of the top surfcasters around these parts, captured the title in the spring event. To enter the catch-and-release tournament, you can fill out an application at Paulie's Tackle or go to montauksurfmasters.com.

Blackfish aficionados can finally rejoice. The season in Long Island Sound opened on Sunday, and the action was excellent by all accounts.

"It was epic fishing," said Rick Pickering of Sag Harbor, who took out his 28-foot Bertram with George Pharoah on Sunday morning to the north side of Plum Island. "The action was nonstop and it was probably the best opener I've ever witnessed. We left the fish biting, too."

The blackfish season for the rest of Long Island waters opens today, with a daily creel limit of four fish per person over 16 inches. In Long Island Sound, anglers can retain only three fish. The season for both areas comes to a close on Dec. 15.