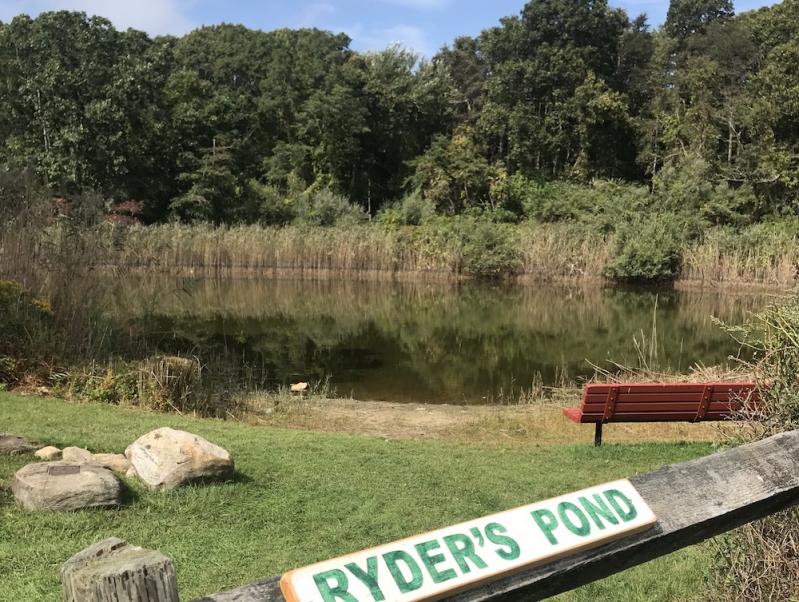 The freshwater pond down the street from our house on North Haven is small and rather round in shape. Because of the proliferation of phragmites, a tall and invasive reed, it's now tough to know its exact dimensions, but in my guesstimate, it's probably around 150 feet across in any direction. A bit smaller than a professional ice hockey rink.

Last weekend, I found some pictures I had taken about 40 years ago with my old Pentax camera in the middle of prime foliage season, and it was amazing to see the pond unobstructed by the reeds. In addition, the hues of red, amber, mahogany, and yellow of the oak trees in the background sparkled in the early afternoon sunshine. The water was placid and peaceful. Despite my minimal photographic skills, each picture could have made for a perfect postcard.

The images brought a smile to my face and warm memories of that simple pool of water and its depth of meaning to so many people. Located just off the west side of Sunset Road, the pond has served as an informal gathering spot for generations of just about everyone in our small community. It has brought people together, especially kids, in good times or bad.

Whether it was riding our bikes with stale bread in our pockets to feed the hungry horde of carp that lived there, catching frogs, tightening our hockey skates to play a game of shinny in the middle of winter, or doing a bit of ice fishing, the pond drew us to it much like a magnet to steel. Growing up, it was our home away from home.

Since 1921, the Ryder family lived in the white farmhouse next to the pond. As such, it has been known in local lore as Ryder's Pond, yet there was no documentation on any maps of the pond's having a formal name. That is until Sunday, when the Village of North Haven held a name dedication ceremony to officially designate the pond as Ryder's Pond. Many members of the Ryder clan were in attendance.

The family was very giving as well. Stanley Ryder, who served as mayor of North Haven from 1956 to 1964, for many years would check on the thickness of the ice during winter to determine if it was safe for us to skate on. He would call in his daily updates to WLNG, the local radio station across the bridge in Sag Harbor. Needless to say, the pond would be loaded with kids that afternoon after school if he gave the green light. He also installed flood lights atop a nearby telephone pole so that we could skate at night. Hot cocoa was also a daily treat for us, courtesy of the Ryders.

While the family recently sold the old farmhouse, it's nice to know that the legacy of this special place will live on and be recognized by those most closely associated with it for almost a century. No doubt future generations of kids and adults will continue to enjoy this simple slice of small-town life.

Out on the larger bodies of water, including Block Island Sound, the fishing action took off in many areas just before the weekend. In local fish parlance, the fall run is officially on for many species.

"There are plenty of bass and blues around in the rips all the way to Block Island," said Chris Miller at Westlake Marina in Montauk. "Diamond jigging has been the lure of choice for many." Miller said that sea bass fishing remains strong, and that those baiting up with clams are doing well with porgies.

Miller also said that the action farther offshore has been good of late. "I had one customer head off on Saturday and they returned the next day with a 140-pound swordfish and two albacore. They also released a small swordfish and broke off a larger one during the night." Miller himself went out a few days prior and had four swords on the line.

"Fishing has been very good, even some spectacular days in Montauk, on surface feeding bass," said the light-tackle guide Capt. Tim O'Rourke of Montauk Point Fly Fishing. "The false albacore have also arrived."

"I'm looking forward to a very good fall for striped bass and blues," said Capt. Michael Vegessi of the Lazybones, a Montauk party boat. The Bones finished up fishing for fluke yesterday and has those diamond jigs shined up for the fall run. The boat departs at 8 a.m. and 1 p.m. and reservations are strongly suggested. "There is a ton of bait around, and we should be doing well from the get-go."

After the northeast winds for nearly a week, "the fishing scene has improved significantly," concurred Harvey Bennett at the Tackle Shop in Amagansett. "Montauk and Napeague are loaded with blues and bass. The sand beaches off of Amagansett have also been hot."

Over at Mrs. Sam's Bait and Tackle in East Hampton, the proprietor Sebastian Gorgone was smiling as he recited the common refrain of good fishing. "Fluke fishing was good up until the end, and the porgy and sea bass bite remains strong in all of the usual locations," he said. Gorgone added that blowfish can still be had in Northwest and Three Mile Harbor, and that the action from the ocean surf is starting to perk up.

And if you want to catch and release a carp, give Ryder's Pond a shot.