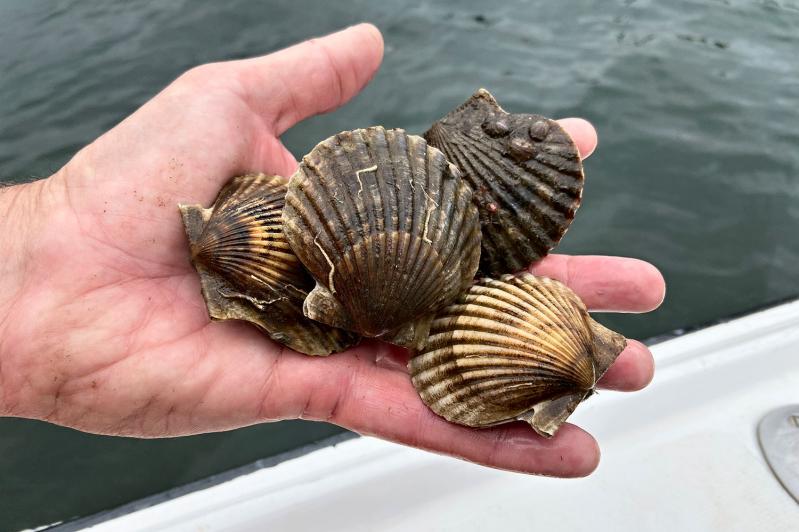 On a normal opening day of scallop season in state waters, local seafood markets would have a good supply of freshly shucked scallops, but that was not to be on Monday.
Jon M. Diat
By Jon M. Diat

Monday morning dawned bright with a stiff, northwesterly wind on the bay as I lifted the bedroom shades. I squinted as I tried to focus on my surroundings from the second floor. It was a little after 7, and not a single boat was in view. It was a sad sight to see but not a total surprise.

It was the opening of bay scallop season in state waters. Normally, upward of several dozen skiffs and workboats, including my own, would have been on Shelter Island Sound and Northwest Harbor slowly dragging their heavy iron dredges in pursuit of the highly coveted shellfish. But the scene in front of me, while beautiful in its fall splendor, felt eerily vacant, much like an empty shell.

It was clear that the dour predictions of a poor season had made the rounds. My preseason exploration the week before had resulted in three scallops. For me, it made no sense to even try again. It was not worth the time and effort, especially in the cold wind that stirred up building clouds that squeezed out some of the first snow of the fall by midmorning.

While one boat finally appeared in front of our house around 10 a.m., the two baymen in their orange slickers did not stay long. Other than perhaps a few hermit crabs or a conch or two, there was nothing in the end bags of the eight dredges they towed, judging by what I saw with my binoculars.

In a more normal season opener, local seafood markets would have a good supply of freshly shucked scallops by Monday afternoon in their heavily iced display cases, but that was not to be. The gusty gale-force winds likely dissuaded some from venturing out, and some are still hopeful that a few scallops will make it for sale as the winds lay down later this week.

"We had nothing come in today," said Alex Fausto, the longtime manager of the Seafood Shop in Wainscott late Monday afternoon. "It was really windy, but perhaps we may get some later in the week when it calms down. Stay tuned." A call to the Southold Fish Market on the North Fork brought the same response.

While I historically side with a good deal of optimism in many things in life, I have taken my dredges off the boat. Back to the basement they went. It was an end to the season before it even started. Perhaps next November will be a different story.

While scallops are scarce, the same cannot be said about the amount of fish being caught here. In short, it has been one of the best fall seasons in several years.

"Bass fishing off of the beach has been the best in at least five years," proclaimed Sebastian Gorgone at Mrs. Sam's Bait and Tackle in East Hampton. "It just does not get much better." Gorgone said that small diamond jigs adorned with a small teaser tied about a foot above remains the hot ticket to success. The fish are feeding on large schools of sand eels, a pencil-thin baitfish. As such, the shiny, slender jigs are the perfect foil to tempt bass to bite.

Gorgone added that the blackfish bite remains strong at both Plum and Fishers Islands when winds lay down and that fish up to 10 pounds have been landed of late. "When the winds allow, the fishing has been excellent," he said.

Ken Morse at Tight Lines Tackle in Sag Harbor had a similar report. "The striped bass fishing has been phenomenal off the ocean beaches. I had one customer on Saturday catch and release 15 keeper-sized bass." As a reminder, anglers can retain only one bass between 28 and 35 inches per day. "And blackfish remains strong to the east, and some nice sea bass and porgies remain in the mix too."

Out at Montauk, Paul Apostolides at Paulie's Tackle Shop in downtown Montauk, also reports solid action with striped bass. "The fishing has been excellent, but the main body of fish has moved a bit west down the beach of late," he noted. "There are still some bass on the north side, but the action in deeper water for the boaters has been excellent, with bluefish also in the mix."

Apostolides also confirmed that catches of blackfish remain strong for those dunking green crabs. "The bite has been phenomenal when the conditions are good," he added. "And sea bass remain plentiful too."

On Sunday afternoon, Capt. Rob Aaronson of the Oh Brother!, a Montauk charter boat, posted a video on social media of a massive school of striped bass feeding on the surface on the north side of Montauk. It was a frenzy of epic proportions.

"The stripers were blitzing for miles," he said. "It was incredible diamond jigging with action the whole trip. There were also plenty of blues and some sea bass, too."