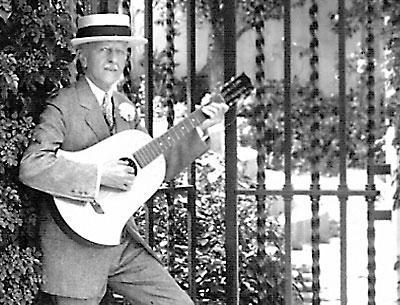 William H. Woodin in Cuba on railroad business. Antony Blinken, the new secretary of state, shares with Woodin a Lily Pond Lane background and a fondness for the guitar.
Courtesy of Anne Harvey Gerli, Woodin’s granddaughter
By John Tepper Marlin

What is the magic of Lily Pond Lane? This rural two-mile stretch of road between two ponds has a remarkably deep pool of talent. It provided a treasury secretary for President Franklin Delano Roosevelt and now it has produced a secretary of state for President Joseph Biden. Four Republican presidents in the 20th century also recruited their treasury secretaries from among East Hampton summer residents.

When Roosevelt began his presidency in 1933, he argued that he needed “broad executive power to wage war against the emergency,” and he invoked a World War I law. Similarly, President Biden at his inauguration called for a “full-scale, wartime” approach to the Covid-19 pandemic.

The U.S. unemployment rate was 25 percent and the banks were closed by a nationwide panic. To fix this, Roosevelt picked a Republican as his treasury secretary, William H. Woodin. He was the longtime C.E.O. of a railcar company included in the Dow Jones Industrial Average and for several decades was a seasonal resident of Lily Pond Lane.

President Biden is now facing a closely comparable challenge as the Covid-19 disease has attacked 103 million people worldwide, snuffing out 2.2 million lives so far. To repair connections with other countries in the fight against the virus, President Biden appointed Antony Blinken, who had been deputy secretary of state under President Obama and Biden’s top staffer on the Senate Committee on Foreign Relations. Blinken’s father, Donald Blinken, formerly U.S. ambassador to Hungary under President Bill Clinton, has for half a century lived seasonally on Lily Pond Lane, across the road from Woodin’s onetime home.

Roosevelt addressed the American people directly in his Fireside Chats, inspiring broad support for his New Deal programs. He delegated to his treasury secretary the details of assuring depositors that their money was safe. Banks had been closed because they didn’t have the cash to pay off jittery depositors. Dollar bills required gold reserves, and there wasn’t enough of either. Foreign creditors were cashing in their paper dollars for gold, and U.S. reserves were dropping fast. The orthodox solution was to raise interest rates to attract foreign investors. But higher interest rates, to keep the gold standard, burdened borrowers and discouraged investment. Here’s what Woodin did:

Day One: He prepared the presidential proclamation for a national weeklong bank “holiday,” formally closing all banks under the Trading With the Enemy Act of 1917 and convening Congress three days later.

Day Three: Woodin considered the views of outgoing Treasury staff and prepared an Emergency Banking Act. It ended private convertibility into gold or silver. U.S. currency was thereafter identified as a “Federal Reserve Note: This note is legal tender. . . .”

Day Four: The Emergency Banking Act outlined a system for examining all banks, reopening solvent ones and providing government assistance to shore up weaker ones. Hopelessly insolvent banks remained shut. The bill was passed superfast on Thursday in the House. The Senate passed it later the same day.

Day Five: Woodin ran the Treasury’s printing presses round the clock. To save time, he even started with a leftover partly printed 1928 series of notes. A few days later, he brilliantly orchestrated a Universal Newsreel clip of trucks loaded with dollars peeling off from the Treasury to the big-city banks. The newsreel clip was shown in cinemas and the word got out — cash was coming! Marvelously, in a few days the lines of depositors clamoring for withdrawals melted away.

Raymond Moley, leader of Roosevelt’s Brains Trust, said, “Capitalism was saved in eight days.” Depositors even returned gold they had withdrawn. Biden’s equivalent is the proposed package to speed vaccines into at least 100 million American arms within 100 days. This is a reasonable goal with multiple paths to achievement.

Roosevelt made clear he was serving all Americans. He appointed to the cabinet the first woman ever, Frances Perkins, the first labor secretary. Woodin made friends for Roosevelt across the country. California bank regulators wanted Woodin to close A.P. Giannini’s Bank of America, whose 400 branches primarily served Italian immigrants. Woodin said no, and the bank reopened. A grateful Giannini switched his allegiance from the G.O.P. to Roosevelt, although Woodin’s empathy for small depositors drove his decision, not politics.

Building common ground across class, educational level, gender, race, religion, and ethnicity paid off for Roosevelt. It will for Biden as well. Nearly half of his 24 cabinet-level nominees are women, and he has set a higher bar for cabinet diversity. Biden is assembling coalitions for new laws in health care, financial markets, energy investment, education, and transportation.

The Covid-19 virus is arguably more urgent than the bank panics. It has killed 441,000 Americans, more than all U.S. military and civilian casualties in World War II. Medical and other front-line workers are especially at risk. Interruption of years of education will affect our children’s future and our own.

President Biden has started well but will need the support of the country to fight Covid-19 — by social distancing, wearing masks, minimizing travel, and getting vaccinated soon. We must hold our representatives in Congress accountable for ensuring the president has the resources to provide relief while we successfully fight the virus.

John Tepper Marlin, Ph.D., a Springs resident since 1981, was chief economist for the City of New York from 1992 to 2006 and served as senior economist for the congressional Joint Economic Committee until 2020. He is writing a biography of Roosevelt’s first Treasury secretary.