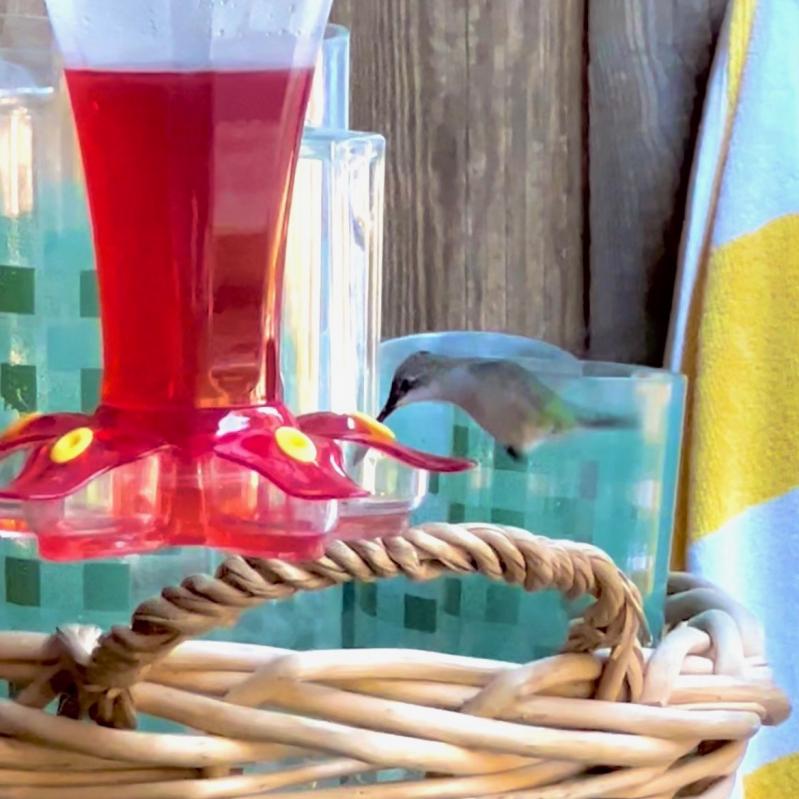 This red nectar from a mix was later swapped out for homemade sugar water.
Griffin Greene
By Baylis Greene

The woman I’m married to can do something I’ve never seen another human being do — an impression of a hummingbird. Hands held in close and flapping rapidly, nose first pointed in the air, then head dipped down as if sipping from the feeder-supplied nectar, then backing up for a look-see before dipping again. It’s disturbingly good.

Hummingbirds have been a real highlight of the summer here in Noyac. That statement may make me sound like an old person, but “shut-in” might be the operative term, what with the high season’s sclerotic traffic, the inability to go for a bike ride, pretty much anywhere, without taking your life in your hands, and the impossibility of entering the woods for fear of tick nymphs attaching to your feet and ankles with such density it looks like you just trekked through a potato field without shoes on.

Granted, the post-crowd sunset trips to the ocean were nice.

The hummingbirds first arrived when we gussied up the back patio with some catnip plants. Soon after, we were prowling the aisles of an Agway in its death throes for a plastic hanging feeder decorated with little yellow flowers, and then the packets of powdered mix for the sweet stuff they can’t resist. Don’t give them red, it’s said, but they preferred it to clear sugar water, signaling so with their happy chirps.

One became two became four, diving, darting, suddenly rising vertically, insect-like. At first they seemed to be competing, as one would dive-bomb another, ushering it away from the feeder, then back again. But I noticed that two would fly off together to a nearby tree, sometimes disappearing into the leaves, other times alighting on a branch within eyesight.

But really, since when has any bird other than a raven, that brainy trickster, been so playful? The hummingbirds, one iridescent green, will blatantly check on us — hovering near the screen door to look in, or stock-still in midair above the patio sofa as I recline with a book, staring down in an assessing or taunting way.

They’ve come to be comfortable enough for a communal meal, dipping into the feeder just feet away as we dine at the outdoor table, always announcing themselves with the alarming buzz of their wings.

Now, fall is in the air, unmistakably felt on those early-evening beach outings. The kids are back at school. The daylight steadily lessens. The outdoor shower will be shut off before long.

Melancholy transitions all. Taking down the hummingbird feeder will be another one.