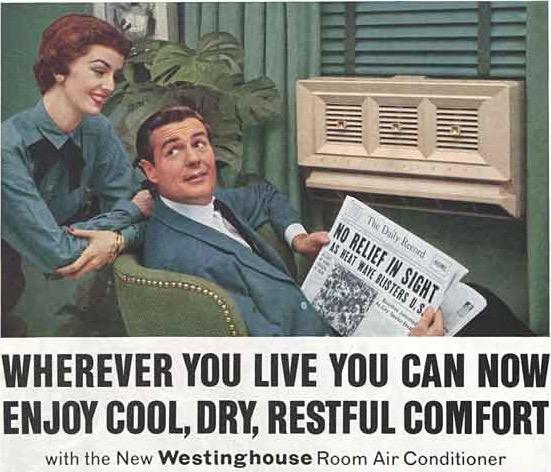 From an advertisement in a 1954 issue of The Saturday Evening Post.
By Baylis Greene

You can count me in with Aretha Franklin and the Germans. The air-conditioning wars, that is, can make for strange bedfellows.

The Queen of Soul was apparently an A.C. skeptic — in a car, for instance, preferring the fresh blast of an open window. It may have had something to do with being real, in sympathy with all those making do without processed air, a “Natural Woman” in touch with the natural world.

In Germany, I read the other day, air-conditioning is seen as artificial and unnecessary, speaking broadly, a weird product of the New World. Instead, just sweat it out and take the pain. Now more than ever.

I simply never expected the air-conditioning wars to reach my own home. Actually, that’s a bit of a stretch. There was no war. What really happened was I kept quiet about it for as long as I could, hoping against hope it wouldn’t come up, and then, after a short, ineffectual protest of delay, on my son’s second request I schlepped a window unit up from the basement for installation in what we call “the family room” (a converted garage — carpeting, couches, big-screen TV).

Hey, I was happy to lose. With all the unrelenting heat we’ve been having lately, even the family dog, a rescue mutt with major separation anxiety, will gladly separate himself and lie in there alone all damn day.

At the office, I was once collateral damage to an A.C. skirmish over another window unit, as I favored pulling the chain on the vintage ceiling fan and opening the windows wide for cross-ventilation. The problem was the unit in question didn’t truly cool anything; it only blew stale air. Tempers, though, flared over fresh air versus conditioned, and the direction the canned breeze was blowing.

The unit that worked — nay, roared — back in the day was back in the production department, a badass of American manufacturing, stripped down to essentials like a hot rod without its hood. I called it the Legionnaires’ machine, though not out loud.

One day I got my revenge. Helping remove a unit from a second-floor window at The Star, I was caught unawares, surprised that a flimsy metal flange could be all that held the weighty mass in place, and it slipped from my grasp, smashing onto the walkway below. No one was maimed, as far as I could tell.

But now that I think about it, what would an editorial staffer have been doing handling an air-conditioner by himself like that? It’s not very likely to have actually happened. More like a fever dream, something born of sustained high heat and humidity.