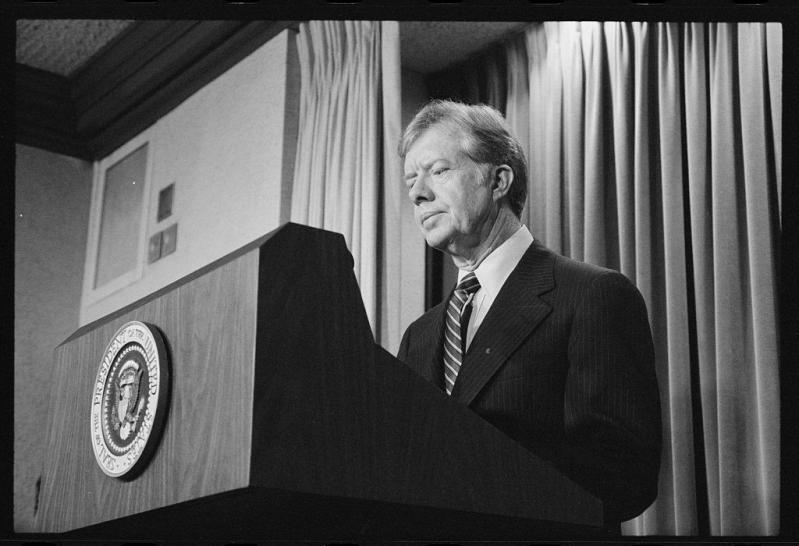 President Carter in 1980, after his change of hair.
Marion S. Trikosko / Library of Congress, Prints & Photographs Division
By Baylis Greene

I trust there are people out there who remember the to-do over Jimmy Carter's hair, how his part one day suddenly switched sides. Early 1979 it was, halfway through his term, and the president's part went from right to left.

It was about imparting competence, maybe even masculinity, was that it? As supposedly the part aligns with right-side or left-side brain activity? Hard to believe a Naval Academy graduate who worked on the nuclear submarine program would buy in, but there you have it.

Recent experience made me wonder, because I walked into a barbershop the other day and walked out with an entirely inadvertently migrated scalp crease.

Okay, so I've lost a few feathers, as my uncle Bob would say. (Sorry, Carter, he was an Army man.) I told the barber I didn't want anything that looked like a combover, which I'd clearly brought down upon my own head through months of coiffure neglect and by using ocean dips and Long Beach swims as baths, producing a straw-like effect. Just break out the electric shears and have at it, I said.

I really wanted to ask for a flat top, but those days and follicles have passed me by. This was as close as I would get. Then, near cut's end, with the last few strokes of a brush my hair was suddenly sloping in the opposite direction. He'd simply forgotten how another faceless customer's mop had been sitting on a dime-a-dozen head.

I left it that way.

It feels fresh, my scalp invigorated, the look pleasingly different. It's surprising how little you need in the way of hair, by the way, to affect other-than-baldness. Just a tuft will do.

My only worry is that if the changeover went from left to right, the opposite of Carter's, do my politics have to follow? I once read that Ronald Reagan was the only successful president with a right-side part. So give the peanut farmer credit for trying.

Speaking of one-term presidents, I've come to more closely resemble another one, George Bush the First, as my part is now on the side with the more deeply receded hairline, as his was — to say nothing of the slightly elongated, misshapen head and crooked smile.

I believe what those features impart is called earnestness.