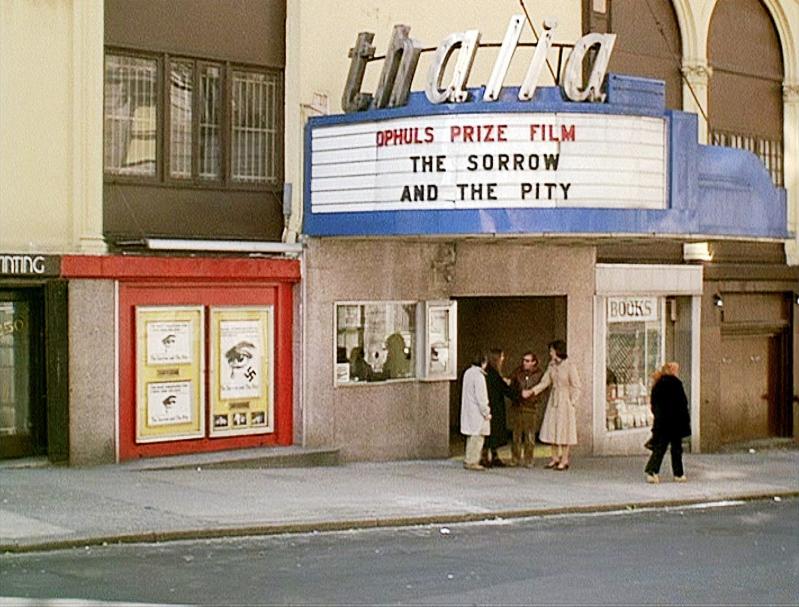 The long-lost Thalis Theater on the Upper West Side, as seen in"Annie Hall," 1977.
By Bess Rattray

When I was a college student in Manhattan, I lived on East Ninth Street, a block from Theater 80 St. Mark’s. Theater 80 was one of the many art-house cinemas of old New York that are now lost to time — one of the smaller and darker ones. The black awning and black sign of Theater 80 still hang over the sidewalk of St. Mark’s Place, but movies haven’t been shown there in decades; it was being used for Off Broadway plays when the Covid-19  pandemic shut it down. The owners declared bankruptcy in January.

It was at Theater 80 that I received my education in Barbara Stanwyck and Greer Garson. This was the 1980s, when the girls of Alphabet City all dressed in black, black, black like Miss Mary Mack. I remember well the brownies they sold at the Theater 80 concession: thin, homemade, and very sweet. Theater 80 was never crowded, and the screen was set back above a platform stage. I liked to make myself comfortable in the front row, rest my retro-1970s Frye boots on the edge of the stage, and eat my brownie while “The Bitter Tea of General Yen” unspooled in the dark, dark, dark.

I’m one of these nonsense-talkers who believes that the 20th-century cinema-going experience enlarged the spirit and inspired poetic dreams. Why Netflix doesn’t cut the mustard, in terms of enlarging the soul, I can’t tell you. (Can it really just be a matter of scale? The difference between an uplifting dip in the ocean and a dip in the bathtub? Or is it because true moviegoing alchemy requires that you enter a magic, darkened chamber in which you eat Jujubes and Dots?) It didn’t seem odd to me at all to go to the movies all by myself when I was young, even in the middle of the day.

My apartment on Ninth was a second-floor floor-through — large enough to have windows at the front looking across to a bodega where crack cocaine was sold and windows at the back looking at P.S. 122. The décor featured a colorfully painted, seven-foot-tall sculptural pâpier-maché head of Nefertiti, salvaged by an ex-boyfriend from an Avenue A nightclub called King Tut’s Wah-Wah Hut. I paid $350 a month into a bank account managed by another tenant, who held the money while we were on rent strike. One evening I was home alone with Nefertiti, with nothing to do, so I phoned the box office a block away at Theater 80 to see what was on. The man who answered the phone said that “Wings” starring Clara Bow was scheduled to start in 30 seconds, but that they could wait: “Come on down,” he said. “We’ll hold the show.”

The very word “arthouse,” like the words “rent strike,” now has a musty pong. Each of the arthouses of Manhattan had a different flair and flavor and aroma. The Thalia, uptown in the 90s near Broadway, smelled of cigarettes and eau de bum; you could smoke in the back rows. The Eighth Street Playhouse smelled of vice. It was at the Eighth Street Playhouse that a young blond man sat himself down two seats from me, unzipped his pants, and began to enjoy himself privately, if you know what I mean. (I stomped into the lobby and told the usher, but the usher didn’t do anything about it except express mild disgust.) The Film Forum. Cinema 1, 2, 3. The Quad. The Bleecker Street Cinema. Lincoln Plaza always reminded me of Woody Allen. Zabar’s and Jean Renoir — nothing was more Upper West Side than Lincoln Plaza.

I had a roommate in another college apartment who worked as a ticket-taker at Cinema Village on 12th Street, inside the ticket booth, below the glow of the turquoise-neon marquee.. That apartment was on Avenue B near 13th, and the roommate was one of the funky-freshest girls in New York City, named Lisa. Hanging out in the ticket booth at Cinema Village should have been a cool job, but the boss was the worst. I’ll never forget Lisa’s disgustingly genius-level-perfect description of exactly how awful her boss was: She said the manager of Cinema Village was the kind of guy who would stop in the street to watch the rear end of a dog when the dog took a turd on the sidewalk.

One winter after I had returned to Manhattan in the mid-1990s — a bit of a lost soul, home from my romantic misadventures in Central Europe, and very broke — I was inspired on a snowy afternoon to come up with a trick for getting into the Angelika Film Center on Houston Street for free. I’d walk purposefully into the lobby of the Angelika holding one red woolen mitten, head straight up to the ticket taker, wave the mitten, and say, “I left my other mitten in the theater downstairs. Can I go look for it?” He would wave me through. (I probably only did this once. Maybe twice. It’s about as criminal as I ever got.)

These days I’m a member of the “Turner Classic Movies for Fans!” page on Facebook, because there aren’t enough gathering places for movie buffs anymore. I scroll on over to the “Turner Classic Movies for Fans!” page and we debate important issues like whether George Raft or Richard Widmark was more authentically gangster, and who was more annoying in musicals, Danny Kaye or Doris Day. We are a bunch of romantic fools. We ask one another movie-fantasy questions, like “Who was the sexiest or least sexy leading man of all time?” — that would be Rudolph Valentino and Robert Taylor —  and “Which movie would you like to actually live inside if you could live inside a movie?”

A lot of the dopes on the “Turner Classic Movies for Fans!” page think they’d like to live inside “Waterloo Bridge,” starring Vivian Leigh, but my answer, these days, is that I’d like to live inside the world of “Mrs. Miniver.” I’d like to be more like Mrs. Miniver, in wartime: Greer Garson, in a spectacular hat, with a small explosion of pheasant feathers jetting from my crown and slim swath of matching silk swinging down to caress my arm.

A Conference for Young People to Create Solutions
Get Outside, Get Moving
Two Traditions, One Fair in Springs
END_OF_DOCUMENT_TOKEN_TO_BE_REPLACED