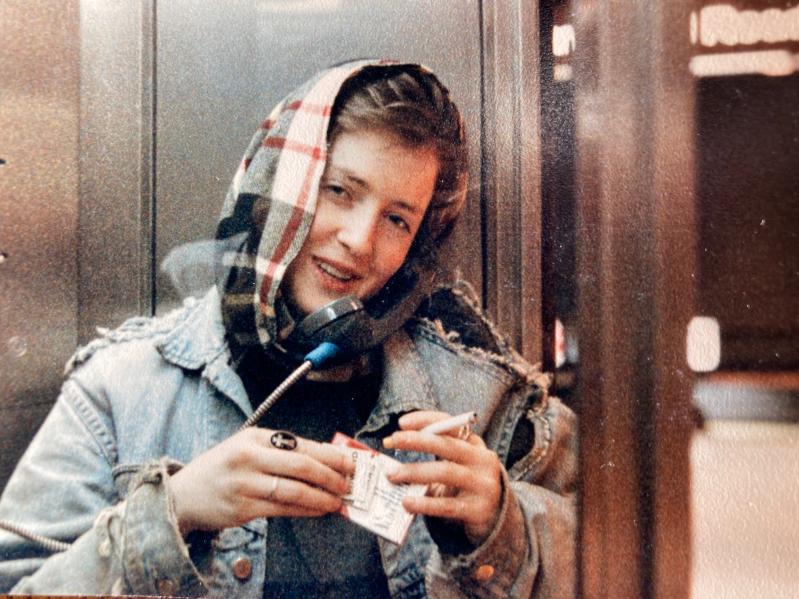 The author in 1985, a teenage freshman at Columbia College in the subway underneath Penn Station, wearing Miss Dior but dressed for underground rock and roll.
By Bess Rattray

I like the “tick” sound of an earring, taken off, dropped into a dresser-top dish. The “tink” of metal meeting porcelain. This is probably something I acquired from old black-and-white movies: a gesture, a sound, of adult femininity.

Even when I was a punk-rock teenager of 15 and 16, I kept a carefully curated vanity table, my bottles of drugstore body lotion and mail-order pins and badges displayed like a still life, like a Joseph Cornell assemblage. I remember my friend Antonia stomping into my dorm room at Concord Academy in Massachusetts, flopping onto my bed, swinging her black Doc Martens onto my polka-dot duvet, casting a critical eye at my vanity table, and asking, “Why do you have your soap and talcum powder spread out like it’s a display in a store?”

I knew the real reason — because I relied on an external display of things, pretty things, rare things, precious things, to shore up my fragile sense of self at 15, at 16 — but that’s not what I told Antonia. I just told her I liked the packaging, and then changed the subject.

My vanity table back then featured a necklace I’d made from a subway token and a length of white string, a bottle of 4711 eau de cologne, an antique silver skull ring with genuine ruby eyes, a bottle of Jungle Gardenia by Coty, and a tin flask of damask-rose talc. There was also a green bottle of lily of the valley perfume from Yardley of London. I splashed on so much lily of the valley in the spring of my sophomore year that a hippie chick from down the hall named Lucy had to take me aside for an intervention, gently letting me know I was choking my classmates with flowery fumes as I drifted past in an adolescent daze, my Walkman blaring “Warrior in Woolworths” by X-Ray Spex.

Later, when I started college at Columbia on the Upper West Side, a dormitory desk served as a bedside vanity table, and the display included false eyelashes, orange lipstick, and Miss Dior. I’d read somewhere that Miss Dior was a classic “girl’s first perfume,” and I liked the debutante sound of that claim, even though it was hardly my own first perfume. (I had already cycled through Love’s Baby Soft in my ballerina years, every garden floral available from Crabtree and Evelyn during my “Anne of Green Gables” phase, and Jungle Gardenia by Jovan, a favorite of dancing girls since 1933 and my intoxicant of choice during those endless high school summers when we danced nightly at the Stephen Talkhouse in Amagansett.)

Soon, the Miss Dior would be replaced with Dior’s Poison, a heavy, dark scent that came in a heavy, pomegranate-shape purple flask. I bought my Poison in the duty-free at Charles de Gaulle Airport on the way home from a trip to Paris with my mother and a redheaded classmate who was studying to be an astrophysicist — so she said — but who was actually the first runway model I knew personally.

The items on my vanity table when I was young were like definitions of the woman I wanted to become. Which one would I be? Was I to be a darling bud — a lily of the valley — with homemade jewelry and cheeks chapped by the rough winds of May? Or was I the kind of cynical chain-smoker who wore thick slathers of Lancome makeup, expensive sunglasses, and perfume so French you could smell it before she walked into the club?

After I was married, many years later, and moved to Nova Scotia, it slowly dawned on me that my vanity table had ceased to be a display of possibilities, and instead had become something more like a museum. A personality museum: Here was evidence of who I had been, the lives I had led. The proof was solid, material, manifest, and could not be denied.

Like so many women who become mothers, I was very much aware of a quicksand sensation as my individuality — my sense of self — was subsumed, swamped, by the overwhelming force of motherhood, the million tasks of parenting, stirring Cream of Wheat, bending to pick up dropped Matchbox cars and runaway macaroni noodles, waking at night to change wet crib sheets, answering 10,000 relentless and unanswerable questions:

“Why does the owl eat the mousie?”

“What is Peter Rabbit’s mommy’s name?”

“Why is it morning and why do we eat eggs?”

The items on my marital vanity table in Nova Scotia were spread out just so on a hand-embroidered runner from the 1930s that I had bought in the 1990s at a flea market in Budapest. The embroidery depicted a woman with Marcel waves wearing an apron as she gazed at herself in a mirror, with the words “Csak egy kicsit hamis vagyok” (“I’m just a little vain”) stitched beneath. I kept five or six bottles of perfume in a cluster on the Hungarian runner, including Demeter’s Persimmon, which I’d picked up in the offices of Vogue but never wore, and the House of Faberge’s signature scent in a flacon with a jeweled Faberge egg-shape cap.

I kept a half-dozen oversize pairs of sunglasses from the late 1960s and early 1970s in a neat line. I kept five completely unused bottles of nail polish there, too. These included Estee Lauder’s Papaya Sorbet, which I had selected back in New York because I wanted a red that might have been worn by Barbara Stanwyck circa the screwball comedy “Ball of Fire,” and Chanel Le Vernis No. 219 Black Satin, a sold-out must-have item of the year 2006 that, when I left Manhattan in a Town Car — rolling down Fifth Avenue, crying for the end of my youth, like F. Scott Fitzgerald bawling “under a mauve and rosy sky” in the back of a cab in “The Crack-Up” — was selling on eBay for $100 a pop. Summer’s lease hath all too short a date.

A cut-glass Victorian candy dish held coral earrings, jade earrings, and two gold chains laden with antique gold charms. I had a name-plate necklace from Jacob the Jeweler of Harlem. I had a silver ballerina-charm bracelet my father gave me when I was 12. I had many liquid eyeliners — coal-black, eggplant, navy-black, and dark-chocolate — although I preferred the pen-style applicator to the liquid and brush.

I never wore the eyeliner anymore. Or the sunglasses, or the Chanel Nail Vernis, or even the gold charms.

One of the consolations of aging is that you no longer have to rely on toiletry brands or perfume purchases for a sense of who you are. Today, 13 years after I moved to Nova Scotia, seven since I moved back home to East Hampton, and five since I stopped working for Vogue, I do still like to display an expensive Diptyque candle, in the scent called “Baies,” on a shelf in my bathroom, but all the other bottles, tubes, wands, tinctures, tubs, and trinkets have been shoved inside drawers or boxed up inside cabinets, out of sight.

I do get great satisfaction from a hard-to-find perfume called Lys Mediterranee by Edouard Fléchier. It’s part of the Frédéric Malle collection that, last time I checked — and this was maybe three years ago? — was exclusively available in the United States downstairs at the now-defunct Barneys New York flagship on Madison Avenue. I have two nearly empty bottles of Lys Mediterranee, thick glass bottles labeled in black, that make a good “thud” when I set them down.

I never actually liked the smell of Poison. Or damask rose. Or Miss Dior, or orange blossom, or even Fracas. I actually never liked those scents at all. It took me a really long time to figure that out.

A Conference for Young People to Create Solutions
Get Outside, Get Moving
Two Traditions, One Fair in Springs
END_OF_DOCUMENT_TOKEN_TO_BE_REPLACED